This Evening!
Michael Shermer on Art Bell’s
Coast to Coast AM radio show

Tonight, Michael Shermer will appear on Art Bell‘s Coast to Coast AM national radio show. Topics to be discussed include: UFOs and alien abductions, psuedoscience and the paranormal, evolution and intelligent design, cults, science and religion. You can tune in live on AM radio stations across the US (free), XM radio channel 165, or you can pay for a subscription to the podcast from the Coast to Coast AM website.

The Skeptics Society needs help promoting a Caltech event with Jared Diamond, on Sunday, January 22nd. If you live in Southern California and are interested in lending a hand, please contact Michael Shermer at mshermer@skeptic.com. (More info about this event will be in the next eSkeptic.)

In this week’s eSkeptic, we present Charles G. Lambdin’s review of the film “The Privileged Planet: The Search for Purpose in the Universe.”

Charles G. Lambdin is a graduate student at Wichita State University, where he teaches psychology and research methods.

Creationism by Any Other Name

Intelligent design (ID) is a dressing up of the old “argument from design,” with technical jargon added to lend a thin veneer of scientific credibility. ID advocates’ opportunistic tactics, which have more in common with politicians than scientists, have been described as the “wedge” strategy — an attempt to gain academic acceptance by maintaining a presence in academic and scientific venues.

The film revolves around the authors of the book of the same title, Guillermo Gonzalez, an astrobiologist, and Jay W. Richards, a philosopher at the Discovery Institute (the book is published by Regnery). Their argument is that life is too improbably to have come about by chance, therefore there must be an Intelligent Designer. The film reviews the standard arguments for the necessary conditions that allow life to exist on Earth or elsewhere, such as that the planet must be in the “Goldilocks Zone” — the distance at which a planet reaches habitable temperatures. The film claims that if the earth were merely five percent closer to the sun temperatures would approach 900° Fahrenheit and all the water would boil off the earth. The type of star also has to be just right. If the sun were smaller, then the “Goldilocks Zone” would have to be closer. But if the earth were closer to the sun then its rotation rate might become fixed with its rate of orbit (as with our own moon), such that the same side of the earth would always face the sun, creating two lifeless sides — a cold, frozen side and a scorched, seared side. (The film ignores the transitional twilight zone between the dark side and light side in which life might exist.) Plate tectonics must diligently operate to recycle carbon; there must be an atmosphere rich in oxygen, liquid water, and a circulating, liquid iron core generating a magnetic field to deflect solar radiation. (Never mind the microbes found at thermal vents in the ocean or at significant depths in mines — which do not require oxygen.) The planet must be orbited by a large moon — our moon stabilizes the tilt of the earth, keeping the seasons temperate. The planet must be surrounded by larger planets in order to protect it from gigantic space debris that are absorbed by these larger planets before they can strike the earth. And the list goes on and on. 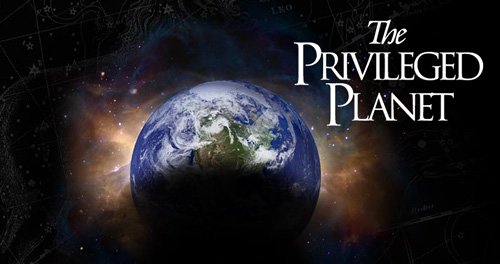 In short, a whole lot of things have to be a precise way in order for a planet to be habitable, and all of these factors must be present in order for life to exist on any planet. (Again, it could be argued that these are merely the factors that allow for a very specific type of life and are not even necessary for a number of earth creatures). In The Privileged Planet it is stated that if we assume that the odds of each of these factors occurring are the same, and if we fix these odds at one out of ten, then the odds of all of these conditions coming together in one location are 1/1,000,000,000,000,000. These odds are so remote, the authors conclude, that it is unlikely that a planet would be habitable due to chance alone, and so the best inference is design.

Now if, as stated in The Privileged Planet, the odds that a planet is habitable are 1/1,000,000,000,000,000, or .0000000000001%, then contrary to what is claimed in the film it would be expected that there should be 10 habitable planets due to chance alone (10,000,000,000,000,000 x .000000000000001). However, the one-in-a-million odds that a star system contains at least one planet is a very conservative estimate! Astronomers who search for extra-solar planets find that about one in ten star systems they search contain planets. Using Gonzalez and Richard’s own odds of habitability, this suggests that there may be one billion habitable planets due to chance alone. And even this may be a conservative estimate! The odds of habitability presented in The Privileged Planet are, after all, rather arbitrary given how they were computed. To illustrate, scientists from the Potsdam Institute for Climate Impact Research, in a paper on “Habitable Zones and the Number of Habitable Planets in the Milky Way,” using only part of the Drake equation estimate that there are 48 million habitable planets in our galaxy alone (http://biospace.nw.ru/astrobiology/Articles2002/Astrobio_franck_22_24.pdf). If this figure is in any way representative of other galaxies, then the number of habitable planets in the universe would be staggering.

The other arguments in The Privileged Planet amount to pointing to coincidences and citing them as evidence of a divine plan, which is, of course, a non sequitur. For example, it is suggested that Saturn and Jupiter were placed where they are so as to protect the earth from asteroids. (This is really no different from Voltaire’s joke in Candide that the Anabaptist drowned in the bay, therefore the bay was created so that the Anabaptist could drown in it! Everything works out for the best in this best of all possible worlds.)

Another claim made in the film is that the position of the earth in the solar system makes for perfect solar eclipses. It is only the perfect solar eclipse that has revealed the atmosphere of the sun to us and further allowed us to confirm Einstein’s idea that the light rays of other stars are bent by the sun’s gravity. A perfect solar eclipse would not be observable from other planets in the solar system. How can it be that the one place in the solar system from which these discoveries could have been made just happens to be the one place where there are observers to make them? Furthermore, one of the factors that contributes to the habitability of earth is its location in the galaxy. This location also makes an ideal place to do astronomy (there’s not a lot to block our view). From this, Gonzalez and Richards argue that there is “a high correlation between life and discovery.” The same factors that contribute to the earth’s habitability also seem to make us able to do science! It must therefore be the case that we were designed so that we could understand the universe and that the universe was designed such that it could be understood by us. (The subtitle of the book is “How Our Place in the Cosmos is Designed for Discovery.”)

The thesis of The Privileged Planet is no different than the classic case of Presidential coincidences: Abraham Lincoln was elected to congress in 1846. John F. Kennedy was elected to congress in 1946. Lincoln was elected President in 1860, Kennedy in 1960. Both of their last names have seven letters. Both of their wives experienced the loss of child in the White House. Both were shot in the head on a Friday. Both were assassinated by Southerners and succeeded by Southerners. Lincoln was succeeded by Andrew Johnson, who was born in 1808. Kennedy was succeeded by Lyndon Johnson, who was born in 1908. Lincoln’s assassin, John Wilkes Booth, has 15 letters in his name. Kennedy’s assassin, Lee Harvey Oswald, has 15 letters in his name. Both assassins were known by three names. Booth was born in 1839, Oswald in 1939. As I am unable to imagine otherwise, these coincidences are too great to have occurred due to chance alone, so there must be some Intelligent Assassin behind it. Thus runs the reasoning throughout The Privileged Planet.

Throughout the film much is made of the fact that we can “do” science at all. Why is it so surprising that we can figure things out about the universe? Such statements as, “We evolved to hunt and gather food, not to do astronomy,” display a complete lack of understanding of evolution. It doesn’t really make sense to say that we evolved to do anything. We just evolved. There is no reason to think that evolution is a teleological process and that we are evolving into anything in particular. Similarly, the statement that, “It is just so astounding that we can even understand the universe at all,” is not an observation; it’s a value judgment. If an occurrence seems near impossible to you, this only really says something about your beliefs regarding nature. (Why should one expect things to be other than the way they happen to be?) Coincidences are not evidence of mystical forces. Statistically unlikely events are, in the long run, likely to occur: There are 280 million people in America, therefore one-in-a-million odds will happen 280 times a day in America. It does not make sense to say that 280 miracles happen a day in the United States, any more than it should seem miraculous that someone will win a lottery.

Ignoring such facts, The Privileged Planet repeatedly beats into the viewer that the coincidences in nature require an Intelligent Designer. Intelligent Design theory begs the question by not having set an objective criterion for what is “too rare” or “too unlikely” or “too complex.” As Schopenhauer said, nothing more is implied by a premise than what is already contained in it. To say that habitable planets are uncommon only implies that they’re rare, not that they’re designed. And as we have seen, they may not be that rare.