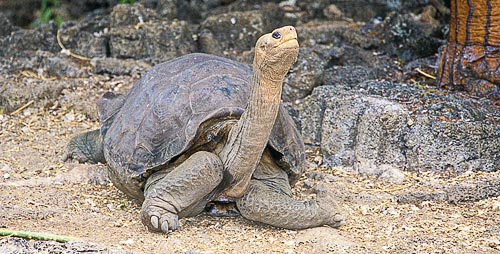 In this week’s eSkeptic Michael Shermer reviews Lonesome George: The Life and Loves of a Conservation Icon by Henry Nicholls (Macmillan, 2006, ISBN 1403945764). This review was originally published in the Times Higher Education Supplement, May 26, 2006. 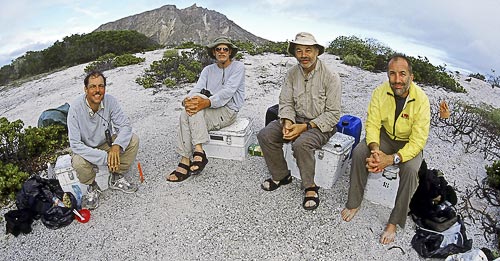 The expedition to retrace Darwin’s footsteps in the Galápagos camps on the same beach where Darwin camped in September of 1835. Left-right: Frank Sulloway, Chuck Lemme, Phil Pack, and Michael Shermer. The volcanic peak in the background is Cerro Brujo.

The Last Animal on Earth

In June of 2004 I encountered my first Galápagos tortoise in the wild. The contact came three days into an inland backpacking journey on the island of San Cristóbal, part of an expedition led by historian of science Frank Sulloway to retrace Darwin’s footsteps in these fabled islands that have become the Mecca of evolutionary theory. Heaving 70-pound backpacks over razor-sharp broken shards of lava as we bushwhacked through thick and thorny vegetation, we finally stumbled upon a magnificent tortoise specimen nearly a meter in length chomping away on a cactus. I readied my camera to capture my first contact for digital posterity when the beast turned away from me to reveal on its back the number 5 painted in bright yellow paint. Nature in the raw indeed! 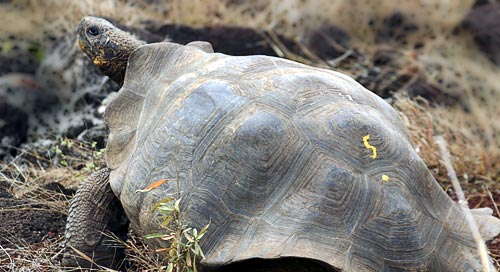 First encounter: Shermer snaps a photograph of his first encounter of a Galápagos tortoise in the interior highlands of the island of San Cristobal. The wild beast turned out to be tortoise number 5, well tracked by scientists from the Darwin station on Santa Cruz.

Sulloway had already debunked the myth that Darwin discovered evolution in this equatorial archipelago, demonstrating that it was not until the great naturalist returned home and began to carefully sort through his collections that he realized the importance of the geographic isolation these islands provided in the origin of species. Darwin’s creationist worldview, in fact, drove him to botch the tortoise observations he made during his five week stint here, as he recalled later from a conversation he had while in the islands with the vice-governor Nicholas O. Lawson, who explained that for the tortoises “he could with certainty tell from which islands any one was brought. I did not for some time pay sufficient attention to this statement, and I had already partially mingled together the collections from two of the islands.” Worse, as Sulloway notes, Darwin and his shipmates ate the remaining tortoise data on the voyage home!

The tracking of all live tortoises in the wastelands of the Galápagos archipelago is part of an ongoing and vital program to preserve the flora and fauna of this delicate ecosystem, and there is no greater symbol for this worthy goal than Lonesome George, the last tortoise of his kind who was plucked off the remote island of Pinta on 1 December, 1971. He has resided at the Charles Darwin Research Station on Santa Cruz ever since. Every year 100,000 animals come to the Galápagos to commune with Lonesome George, but they are of the hominid variety; despite a $10,000 reward offered to zoos and collectors around the world, a female Pinta tortoise has yet to be found. George is the loneliest animal on earth.

If literature confers a form of immortality, however, then George has a place in the sun now that he has his own biographer in evolutionary biologist Henry Nicholls. Lonesome George: The Life and Loves of a Conservation Icon will do for the cause of science and preservation in the Galápagos what Jonathan Weiner’s The Beak of the Finch did a decade before — entertain, enlighten, and encourage us all to do our part to preserve not just these islands, but earth island itself. For Lonesome George is indeed a conservation icon. Five feet long and weighing in at 200 pounds, George (named after the 1950’s American comedian “Lonesome George Gobel”) is estimated to be about 80 years old, the last 30 of which he has spent in regal splendor at the Darwin station, as scientists coax and cajole him to mate with females, one of which was even human.

Shermer chases down a wild Galápagos tortoise on the run in the volcanic highlands of San Cristobal, the area Darwin hiked to in 1835 that he called the “craterized district” because of the dozens of volcanic cones.

As Nicholls tells the story — and he is a brilliant storyteller and narrative stylist in the finest tradition — a beautiful Swiss graduate student named Sveva Grigioni undertook the tried and true method of semen extraction as practiced by animal breeders. In tortoises the penis is tucked away inside the tail for safe keeping while it traverses across sharp lava rubble. When aroused, the penis emerges and becomes erect, allowing an ejaculation to occur. Scientists have had some success in capturing an ejaculate for artificial insemination by, well, a form of human-tortoise foreplay. As Nicholls describes the process employed by one scientist on another tortoise:

She began to touch his rear end and stroke his legs, causing the beast to raise himself off the ground. She then began to caress his tail. Eventually the penis flopped out and with more gentle rubbing produced an ejaculate.

Grigioni first practiced this process on other male tortoises, and she was able to produce an ejaculation inside 10 minutes. But George has been lonesome for a very long time and when she entered his pen, “He was very shy at the beginning. He was such a big animal and he was so afraid.” Grigioni spent days habituating herself to him so that she could finally touch and stroke him. Nothing. Grigioni then smeared her hands with genital secretions from females of a closely related tortoise species, and that at least got a look at George’s penis, which appeared to be in good working order. But the subsequent attempts to get an ejaculation, or to get him to mount a female, failed. As Grigioni explained: “Day by day, he started to be more interested in the females. He started to try copulation but it was like he really didn’t know how.”

Herein lies a tale for our times: human degradation of the environment and exploitation of the flora and fauna can result in nature’s impotence. If we wait too long we may not know how to make right our environmental wrongs. But it is not too late. Henry Nicholls’ Lonesome George is an emotional but fact-filled call for action, and Lonesome George himself deserves our care and concern for what he represents as the last animal of his kind on earth.

On June 17, 2006, Free Talk Live interviewed Dr. Michael Shermer “about the environment and religion in a privatized education system.”

Exploiting our willingness to believe