Thanks to Richard Dawkins’ webmeister, Josh Timonen, fans of Dawkins have had a chance to wish him a virtual happy birthday, which is well worth a visit.

The past six months have seen the rise of Dawkins’ star from well-known scientist to a public intellectual of the highest order, thanks primarily to his landmark book, The God Delusion, which at the time of writing has been on the New York Times bestseller list for six months, two weeks. Although I still consider the New York Times bestseller list to be practically a paranormal mystery in terms of explaining how some books get on there, I think that in this case there are two primary reasons for the success of The God Delusion:

So with that, Happy Birthday Richard from all of us at the Skeptics Society and Skeptic magazine.

In this week’s eSkeptic Warren Allmon reviews two books: The Measure of God. Our Century-Long Struggle to Reconcile Science & Religion. The Story of the Gifford Lectures, by Larry Witham (HarperCollins, 2005 ISBN 0060591919), and Before Darwin. Reconciling God and Nature, by Keith Stewart Thomson (Yale University Press, 2005, 0300107935)

Warren D. Allmon is the Director of the Paleontological Research Institution (PRI) in Ithaca, NY and Adjunct Associate Professor of Earth and Atmospheric Sciences at Cornell University. He earned his A.B. in Earth Sciences from Dartmouth College, and his Ph.D. in Earth and Atmospheric Sciences from Harvard University. He became PRI’s fourth Director in 1992. Allmon’s major research interests are the evolution of marine mollusks and the connection between macroevolution and ecology. He was the recipient of the 2004 Award for Outstanding Contribution to Public Understanding of Geoscience from the American Geological Institute. 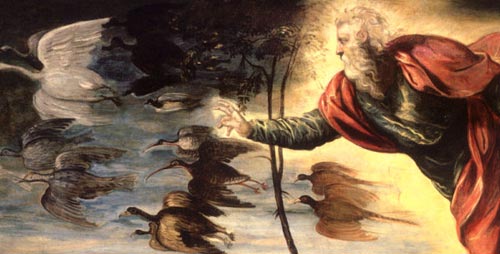 Before Darwin. Reconciling God and Nature (detail of cover)

Today, as in Darwin’s time, scientists and non-scientists alike struggle to fully reconcile materialistic science with their personal and social search for meaning in life. On the one hand, for example, recent proponents of intelligent design have declared their intention to overthrow “materialism and its cultural legacies.” On the other, many current mainstream scientists — both those who are religious and those who are not — have attempted to reconcile their scientific pursuits with their non-scientific personal philosophies.

These two volumes provide highly readable and nicely complementary surveys of the past three centuries years of this conundrum. As his title suggests, Thomson covers the period from around 1700 to Darwin’s Origin of Species in 1859, essentially following the intellectual trajectory of the school of thought known as natural theology, which sought to integrate religion with observation and understanding of the natural world. Witham covers the period ca. 1890 to the present by summarizing the highlights of a Scottish lecture series, the Gifford Lectures. Together, both books provide a primer on the topic and touch on issues that continue to bedevil human understanding to the present day. This history has much to teach us.

As Thomson notes in his Preface, “Evolution is part of a much broader and older inquiry and a deeper contest for our intellectual commitment, a contest between a world system that expects every part of the cosmos ultimately to be explainable in terms of natural properties and processes and one that maintains the existence of a fundamental core of unknowability, of supernatural mystery and controlling hand of an eternal non-worldly Being. This may be humankind’s oldest intellectual puzzle.”

One of Thomson’s major themes in tracing this history is that “it has not always been necessary to choose between one side or the other: science or religion, reason or mystery. In the age before Darwin, many powerful clerics were also notable scientific scholars and leading scientists were often at least conventionally pious. For them, science and religion could share a common philosophical basis with the premise that a careful, rational study of nature, instead of denying God, would confirm that all life is, after all, the product of God’s unique creation.” Continuing, he writes: “Many were deeply religious; all were consumed by the need to solve this potentially all-consuming challenge to their world view… As well as admiring the force and elegance of the writing and the inventiveness of the arguments, we may also variously envy these earlier scholars their certitude, their daring, and often their humility and caution. It also becomes clear that this is not just a struggle between two sides; it is also a series of debates raging within both what we now call ‘science’ and ‘religion’”. 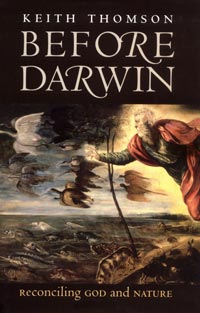 The challenge that a “self-ordering world, operating on independent laws and motions — and, above all, on chance — posed to received religion” can be seen in its long history, going back at least to Descartes (1596–1650). At the beginning of the Enlightenment, says Thomson, “the problem had been to find a secure place for science in a religious world; by the end, the problem was exactly the opposite: if the world operates through Second Causes, where was the role for God? One solution was to insist on the literal truth of the biblical story of creation: but that necessarily represented a denial of the discoveries of science about the age of the earth (and universe) and the role of change”.

Thomson devotes special attention to the thought and writings of Anglican cleric William Paley (1743–1805). Darwin read and “delighted” in Paley’s work, especially his A View of the Evidences of Christianity (1794) and Natural Theology (1802), and was even assigned the same rooms in Christ’s College Cambridge that Paley had lived in 70 years before. Paley was required reading at Cambridge in the 1820s and Darwin didn’t mind a bit, as he noted in an 1859 letter to John Lubbock: “I do not think I hardly ever admired a book more than Paley’s Natural Theology. I could almost formerly have said it by heart.”

Paley’s famous watchmaker analogy, Thomson reminds us, can be traced back far beyond Paley, at least to Thomas Burnet (1681), and perhaps all the way back to Cicero. Thomson notes that “Darwin’s reading of Natural Theology in 1831 therefore has a particular resonance for anyone today who is interested in the question of how the apparently separate subjects of science and religion can be made one”. The strength of Paley’s natural theology, says Thomson, “was that it did not depend on divine revelations and demanded no leaps of faith and suspensions of disbelief. Miracles are not mentioned in Paley’s book. Interestingly enough, neither is the Bible”. “Examination of the eye [is] a cure for atheism” said Paley.

Scottish lawyer and judge Adam Gifford (1820–1887) left nearly half his fortune — £80,000 (equivalent to around $5 million today) — to fund a remarkable lecture series at Scotland’s four historic universities: Aberdeen, St. Andrews, Glasgow, and Edinburgh. The topic was the knowledge of God by way of science and natural theology or, as he put it, “all questions about man’s conception of God or the Infinite.” No limitations were to be imposed on lecture topics, and speakers would be subject to “no test of any kind, and shall not be required to take any oath, or to emit or subscribe to any declaration of belief, or to make any promise of any kind.” A total of 220 speakers have delivered 207 lecture series since 1888, yielding more than 200 published books from about 150 of these lectures. Gifford lecturers are, as the dust-jacket says, “a veritable Who’s Who of modern scientists, philosophers, and theologians,” including William James, Karl Barth, Reinhold Niebuhr, Hannah Arendt, Carl Sagan, Niels Bohr, Alfred North Whitehead, John Dewey, Charles Sherrington, Arnold Toynbee, Werner Heisenberg, Freeman Dyson, John Polkinghorn, Ian Barbour, and Holmes Ralston. 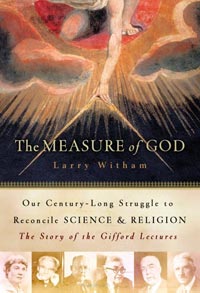 “Adam Gifford had been a man of affairs and a man of his time” says Witham. He loved the Bible as poetry, opposed many of the materialistic philosophies of the time, but late in life became “deeply attracted to the rationalist philosophies of continental Europe” and was open “to all kinds of constructive spiritual ideas, an openness that dogmatists in neither religion nor science would support”. “With an unshakable conviction that God existed, he did not worry about what philosophy or science might turn up”. Witham notes that Gifford’s project “was launched in ‘one of the most dangerous and fretful periods of human intellectual history, the period that gave rise to our own age,’ as one writer described the time. Everywhere, a mood of doubt was in the air, even if its meaning was not entirely understood. ‘By 1900 schoolboys decided not to have faith because Science, whatever that was, disproved Religion, whatever that was,’ said a later Gifford lecturer. The sciences would challenge virtually every cherished belief society held about God, humanity, morality, and history”.

Witham tries to “make sense of the Gifford legacy by presenting it as a story in four acts, separate dramas made up of biography, ideas, and events that span a century — or about 117 years — of western religious thinking in the face of science.” As Witham observes, “the vision of Lord Gifford came in a simpler time,” and he notes the Giffords’ limitations: they “began as, and largely remain, a British philosophical institution, and one might also say male and Protestant. The first Jewish thinker spoke in 1914, the first Catholic in 1930, the first woman in 1972, and the first Muslim in 1980.” Yet the lectures “became a magnificent array of fundamental and unresolved disagreements, a kind of museum of intellectual conflict.” They illustrate in grand sweep “our more general, heroic, and modern desire to reconcile God and science. They represent, perhaps, our optimism about knowing the truth, and even about taking the measure of God”.

It is quite remarkable that we are still arguing about essentially the same topics that we were a century or two or three ago. There are of course differences, but with strong qualifiers that urge our continued attention: secular science clearly has the upper hand in Western society, although much of the population of the most scientifically accomplished and technologically sophisticated nation — the United States — knows little about science and professes to be highly religious. “Before Darwin,” natural philosophy more or less consisted of trying to reconcile God and nature; after Darwin we still struggle with the same issues and this familiar history takes on a new immediacy and relevance now. Theism, deism, atheism, utilitarianism, and a hundred other “isms” in our polyglot and cacophonous world are all answers to “reconciling God with Nature.”

It is perhaps this tension — sometimes constructive, sometimes not — between change and stability, between comfort and the unknown, between certainty and mystery, that ultimately unites both religion and science, and perhaps ultimately offers the best way into a dialogue between these two great human pursuits.

In February 2007, James Swingle interviewed Dr. Michael Shermer. James is Publisher of the online literary quarterly Noneuclidean Café which features articles on personal growth, as well as fiction and poetry. The interview aims to provide education on such issues as confirmation bias, the purpose of subjecting beliefs to scientific experimentation, and the problem with shifting the burden of proof to the other side.