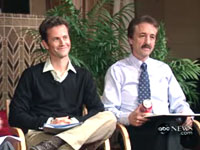 Michael shares some thoughts about the recent “Does God Exist?” debate on ABC television’s Nightline. The debate pitted atheist activists Brian Sapient and Kelly from the Rational Response Squad (creators of the internet-based “Blasphemy Challenge” campaign) against confrontational Christian evangelists Ray Comfort and Kirk Cameron from The Way of the Master televised ministry (creators of the infamous “Atheist’s Nightmare” argument that the Intelligent Design evident in bananas proves the existence of god). For more on the Nightline debate, an ABC News summary article and extensive video content from the show is available.

The burning question on Swoopy’s mind, for all of our guests: “What motivates you when times look tough for skeptics?”

When writing about the bizarre inanity and silliness of the American creationist movement, an author has two choices: assume a scholarly tone and take the whole issue seriously, or lampoon the entire issue and treat it with disdain and sarcasm. The bookstore shelves are flooded with recent titles written by scientists and philosophers and skeptics, nearly all of which take a earnest philosophical or scientific approach, and treat this issue as a matter of gravity. Many of the longer books spend entire chapters debunking the superficial arguments of fundamentalists on such matters as Noah’s ark, on the assumption that anyone who actually reads books will be able to follow their arguments. But they are preaching to the choir.

The authors of Flock of Dodos: Behind Modern Creationism, Intelligent Design, and the Easter Bunny take the approach of satire and sarcasm. Although the title of the book is the same as Randy Olson’s 2006 documentary film (which criticized not only the intelligent design movement, but also scientists for not being sufficiently articulate in promoting evolution), I cannot find any evidence that the two are related. Since titles are not copyrighted, they may have independently converged on the title, or one of them borrowed from the other. Either way, the Brown and Alston book is much more satirical than the relatively even-handed documentary film. Barrett Brown is credited as a writer for National Lampoon, Cracked, Jest, Wired, Playboy and www.nerve.com, and his writing has all the edginess and bite of these magazines and the world of web blogs and sharp political satire. Jon Alston is a Professor of Sociology at Texas A&M University, where he studies the sociology of religion, so he must have a lot of first-hand experience dealing with this topic in the heart of Bush Country. Together, they have penned a hilarious no-holds-barred satire of the modern creationist and “intelligent design” movement that is LOL funny. Instead of an even-handed documentary, Brown and Alston’s book is the print equivalent of Penn & Teller’s TV show “Bullshit!” 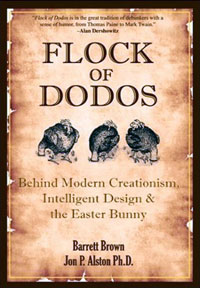 Brown and Alston are frank about their approach from the first chapter, where they warn that they will not only step on toes, but cut them off. “This will not be a polite book. Politeness is wasted on the dishonest, who always take advantage of any well-intentioned concession, and the leaders of the so-called “Intelligent Design” movement, as we shall see, are so incredibly dishonest that they could cause a veteran heroin addict to blush — not out of any moral objection on the part of the addict, but rather out of the embarrassment that anyone could be so darned bad at lying. And, as we shall see, the Intelligent Design folks are bad liars indeed”. The rest of the first chapter goes into a detailed account of the Dover, Pennsylvania Intelligent Design (ID) trial, and uses the court transcripts and the creationists’ own words to expose their lying and dishonesty. Brown and Alston quote extensively from the confused and convoluted testimony of William Buckingham, the creationist school board chairman who openly promoted his religious motivations before trial, then lied under oath repeatedly to cover his tracks, apparently at the instructions of his lawyers. As Brown and Alston sum it up, “to know William Buckingham is to know the millions of our fellow Americans who are ignorant not only of the theory they’d like to discredit, but also of the pseudo-theory with which they’d like to replace it; who, knowing full well that they lack the basic data to make a decision between the two, do so anyway and loudly at that; and who lie through their teeth when asked exactly what it is that motivates them to do these sorts of things in the first place. William Buckingham lied because he believed it was necessary to do so in order to preserve the truth as he saw it — that literalized Christianity is the one true religion, and that Darwinism is its greatest threat”.

The second chapter details the history of fundamentalist efforts to control the government or educational system, or force the Ten Commandments into the Constitution, all the while exposing the hypocrisy and ignorance of the people who run these crusades. Chief Justice John Roberts, Terry Schiavo, Phyllis Schlafly, Senator Tom Coburn of Oklahoma, William Jennings Bryan and the Scopes trial figure prominently in this chapter. In the third chapter, Brown and Alston take aim at some of the bizarre notions of the creationist movement, including George Macready Price and “flood geology,” the failure of the prophesies of the Millerite Movement (leading to the Seventh-Day Adventists), along with Henry and John Morris, Ken Ham, the Paluxy dinosaur and “human” tracks, the deliberate misuse of the Second Law of Thermodynamics, and concluding with a savage satire of the creationist attempts to rationalize the Noah’s Ark story entitled “Profiles in Stupidity.” It concludes, “Yahweh does indeed have a well-established tendency to test the faith of his followers, and discrediting the holy attempts of his most pious adherents to establish a young earth would certainly constitute the greatest test of all. And such trickery would explain why Henry Morris and his son John are such disingenuous, pudding-brained goofballs; Yahweh could do nothing more to discredit the creationist movement by creating its most well-known proponents, if not in His own image, then in the image of some moderately retarded, would-be con artist. Heck, I wouldn’t put it past Him”.

In the fourth chapter, they skewer the confused thinking and dishonest tactics of the Intelligent Design creationists, especially William Dembski and Michael Behe. Brown and Alston show how far the theological notions of the ID creationists drive their supposed “scientific research” and use the creationists’ own words to show the silliness and hypocrisy of their dogmas. Witches, Senator Bill Frist, and lesbian bonobo chimps also make a prominent appearance. The fifth chapter details the Deist philosophy of the Founding Fathers, who refused to let religion play too great a role in the Constitution, and how the fundamentalists violate both the words and spirit of these Patriots by claiming that the United States was founded as a “Christian nation.” It concludes with the full text of the infamous “Wedge Document” of the ID creationists, which details their political and PR strategy to force their viewpoints on the American scientific community and educational system. As Brown and Alston summarize, the Discovery Institute “is willing to mischaracterize the results achieved by real scientists in order to achieve short-lived propaganda victories, and it is willing to continue to do so even after these real scientists object and even after it has apologized and promised to stop doing so. Above all, it is willing to cloak its true socio-political goals behind a consciously-crafted veil of dispassionate scientific inquiry, even while denouncing science itself. If the Discovery Institute tells a lie, it does so in order to advance the Truth. Because the Discovery Institute fights for morality, it is above morality. Indeed, the intent of the Discovery Institute is simple enough. Con men are rarely complicated”.

In the final chapter, entitled “So you’ve decided to take a stand for science!” Brown and Alston summarize the situation, and conclude with profiles of the major players, skewering them in their own words to reveal their dishonesty or hypocrisy. Phillip Johnson, William Dembski, Stephen Meyer, and ex-Senator Rick Santorum all get the royal treatment. Ken Ham of Answers in Genesis is compared to a werewolf in both his appearance and his bizarre behavior. Brown and Alston provide an extended description of Ham’s efforts to indoctrinate school children to harass and disrespect their teachers and disrupt classes.

In short, Flock of Dodos pulls no punches, and makes no attempt to win friends and influence fundamentalists. It is not for the religiously sensitive, but for those who have been exposed to the creationist nonsense and want to see it get the lambasting it deserves. It certainly won’t make evangelicals happy, but I doubt that the authors expected any of them to read it. It will appeal, however, to the large number of intelligent and inquisitive people (especially the cynical college-age crowd) that watch Jon Stewart and Stephen Colbert on Comedy Central, Penn & Teller’s Bullshit! series on Showtime, and relish in wicked satire and irreverence for all things foolish.