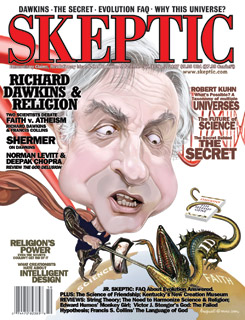 Free article from this issue!

One of the knottiest problems in all of cosmology (with deep implications for theology and metaphysics) is why our universe is structured the way it is and what that particular configuration of laws and constants of nature means. As you will see in reading this brilliant summation and classification of the numerous answers to the question — “Why This Universe?” — there are many well-thought out answers but little consensus among the experts about which one is the most likely to be true. Here we see science on the borderlands between, say, physics and metaphysics, between empirical evidence and theoretical speculation. In the 15 years of publishing Skeptic magazine, I believe this is one of the most important articles we have ever published. Enjoy.

DOWNLOAD Why This Universe
article by Robert Kuhn (PDF)

On the last episode of Skepticality, the Skeptical Inquirer’s own Benjamin Radford discussed new Nessie sightings and other lake monsters from his comprehensive book on the subject. This week, Ben is back to tackle a brand new paranormal mystery from his own back yard.

Almost over night, a video of a glowing, orb-like apparition at the courthouse in Santa Fe, New Mexico has soared into the media spotlight, with widespread news coverage and nearly 100,000 views on YouTube. Was it the spirit of an infamous murderer, the ghost of a construction worker who met his demise, or a disturbed Indian burial ground? Derek & Swoopy discuss paranormal investigation in the age of viral video with author Benjamin Radford, who examined the video tape and went to the site to investigate the mysterious Santa Fe Courthouse Ghost.

Michael Shermer’s
Out of Body Experiment