the next lecture in our fall season…

The author of the highly acclaimed and controversial book, Taboo: Why Black Athletes Dominate Sports and Why We’re Afraid to Talk About It, investigative journalist Jon Entine, in his new book Abraham’s Children, attempts to answer new taboo topics, such as: Did Moses really live? What was the real fate of the Lost Tribes? How did the advent of Christianity change the DNA of humanity, and why Jews — the tiniest fraction of the world’s population — score highest on intelligence tests and hold so many Nobel Prizes, why there are disproportionately so many more Jewish lawyers and doctors, and what the answers to such questions tell us about human nature and nurture. Entine vividly brings to life the profound human implications of the Age of Genetics, retelling the story of the Bible through the prism of DNA, while illuminating one of today’s most controversial topics: the connection between genetics and identity. The focus of genome research has shifted from our shared humanity to human differences, and we are now confronted with questions once considered taboo. 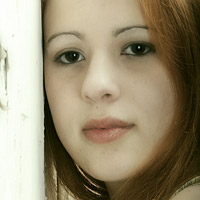 This week Skepticality has a double bill of brainy, beautiful skeptics working to educate the public about the benefits of science and evidence-based reasoning. Astrophysicist Dr. Pamela Gay (of the Astronomy Cast podcast) and Private Investigator Alison Smith (the founder of the Skeptical Analysis of the Paranormal Society) discuss their work and share their thoughts about the recent lectures they gave at Dragon*Con 2007 (as part of the Space, Science and Skepticism programs) — lectures that helped introduce skeptical investigation to a new kind of audience.

In this week’s eSkeptic James N. Gardner reviews Janet Browne’s book entitled Darwin’s Origin of Species: A Biography (Atlantic Monthly Press, 2007, ISBN 0871139537). James N. Gardner is an Oregon attorney and the author, most recently, of The Intelligent Universe: AI, ET, and the Emerging Mind of the Cosmos. 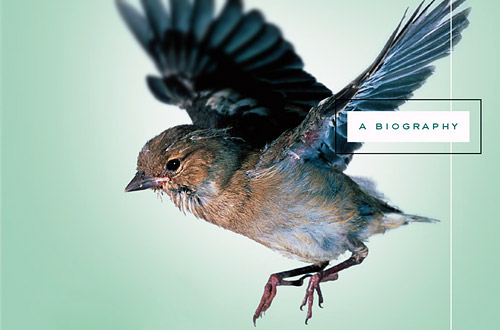 Darwin’s Origin of Species: A Biography (detail of cover)

The Origin of the Origin

Of all the world-changing books in the scientific canon, only Charles Darwin’s Origin of Species is fully accessible to the lay reader.

There are several reasons for this, all closely related. First, the language of physical science has always been mathematics. Isaac Newton could never have formulated a precise description of the phenomenon of gravitation absent the tools supplied by calculus — a field of mathematics that he invented for the express purpose of presenting his ideas adequately. By contrast, the language of evolutionary biology, at least in Darwin’s era, was the vocabulary of everyday life — birth and death, success and failure, survival and extinction.

Second, Darwin was a gifted verbal artist; there are passages in The Origin of Species that shimmer with clarity and resound with grandeur.

Third, the key rhetorical tool deployed by Darwin in his masterpiece was metaphor. The Malthusian struggle for survival in human society metaphorically represented the struggle to survive endured by every creature that every walked, flew, slithered, or swam on planet Earth. Moreover, the practice of artificial selection — the process by which farmers and breeders over countless generations have molded, as if from living clay, nearly endless forms of canines and bovines as well as grasses and vegetables bred to satisfy human nutritional needs — became a symbol for natural selection, which is the process at the heart of Darwin’s theory. So it is scarcely surprising that The Origin of Species is uniquely accessible to non-scientists: it is nothing less than a metaphorical retelling of the human story, rendered on the vast canvas of the entire biosphere.

Charles Darwin’s Origin of Species is surely one of the greatest scientific books ever written. Yet it does not fit the usual stereotype of what we nowadays expect science to be. It is wonderfully personal in style. It has no graphs or maths, no specialized language. 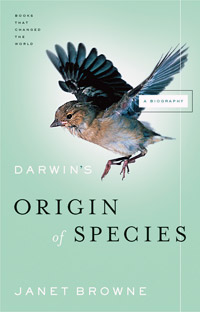 Amid the flood of books about Darwin that continue to spout forth unabated from scholarly and popular presses, Darwin’s Origin of Species stands out for reasons that bear a remarkable resemblance to the factors distinguishing Darwin’s own contribution from those of more typical scientists.

First, Browne’s book is clear and artful. It reads like a compelling mystery — indeed, it draws us into the compelling mystery of speciation that captivated Darwin. It highlights Darwin’s personality as well as his scientific genius — just as Darwin infused his own treatise with personal musings and reflections. And it adheres tightly to its topic — the story of this one extraordinary book — just as Darwin focused relentlessly on the theme of speciation through natural selection while eschewing speculation on broader topics. As Bowne puts it:

The … scope [of The Origin of Species is limited] to one restricted problem and [does] not deal with the grand questions of the evolution of the universe, the first sparks of life or the future of the human mind.

The Origin of Species was revolutionary because it reconceived what had previously been understood exclusively in religious terms — the creation of endless diversity in the living domain — in a thoroughly secular and naturalistic way (which is why the book remains deeply offensive within certain quarters of the religious community). But Darwin’s scientific insights could never have achieved the monumental impact chronicled by Browne were it not for the broad accessibility of The Origin of Species. As she puts it:

It was one of the first genuinely public debates about science to stretch across general society. [The] varied response, evocative of the cultural diversity of the nineteenth century, remind us that the introduction of new ideas is rarely straightforward and that the past histories of science have involved many different forms of publication, many different audiences and many different languages as well as the ideas themselves. 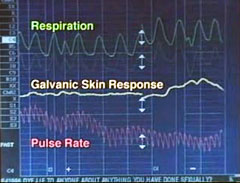 Can the polygraph machine really scientifically measure if someone is lying, or are all those graphs and numbers just pseudoscience in the service of law enforcement? Can we tell if someone is lying to us by their body language or facial expressions? Michael Shermer puts both the polygraph and lie detection to the test in this dramatic episode that features O.J.’s jury consultant lie detection expert.