As Swoopy finds out this week when she talks with Shermer and Dawkins, Expelled is not the film these scientists agreed to be a part of — nor were their experiences at advanced screenings what they expected…

The Doping Dilemma
Game theory helps to explain the pervasive
abuse of drugs in cycling, baseball and other sports 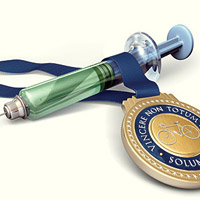 We are pleased to present Michael Shermer’s extensive research article on doping in sports, most notably cycling (his own sport) and baseball (as the new season gets underway).

I am very proud of this piece for several reasons: (1) my beloved sport of cycling has become so corrupted with drug scandals over the past two decades that there is not much of a sport left worth watching (unless we want to turn it into a reality show — “Doping with the Stars” or “So you Think You Can Dope”); (2) baseball, track and field, and other sports are similarly plagued with controversy and so the principles I develop in one sport apply to others; (3) I believe I have come up with a solution by understanding the psychological and behavioral economic underpinnings of both doping in cycling and cheating of all sorts in all sports. To my knowledge no one has applied game theory to the problem of doping in sports, and through that theory emerges both causal understanding and possible solutions. I look forward to reading your comments on this piece, and I must take a moment to thank the good folks at Scientific American for the dazzling artwork, layout and design, and most notably my editor for this piece, Peter Brown, for his brilliant editorial and content improvements that so improved what I originally submitted. — Michael Shermer

READ the full article for FREE
on ScientificAmerican.com 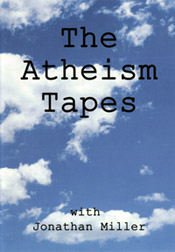 In these revealing interviews the neurologist turned playwright, filmmaker and self-described atheist Jonathan Miller filmed conversations with six of today’s leading men of science and letters, including: the evolutionary biologist Richard Dawkins, the philosophers Daniel Dennett and Colin McGinn, the playwright Arthur Miller, the theologian Denys Turner, and the Nobel laureate physicist Steven Weinberg. These distinguished thinkers discuss their personal intellectual journeys and offer illuminating analyses of belief and disbelief from a wide range of perspectives. Compelling viewing you won’t want to miss. 2-DVD set (90 min. each).

the next lecture in our Spring season…

Apes and dolphins: primates and cetaceans. Could any creatures appear to be more different? Yet both are large-brained intelligent mammals with complex communication and social interaction. In the first book to study apes and dolphins side by side, Maddalena Bearzi and Craig B. Stanford, a dolphin biologist and a primatologist who have spent their careers studying these animals in the wild, combine their insights with compelling results that teaches us about another large-brained mammal: Homo sapiens. Noting that apes and dolphins have had no common ancestor in nearly 100 million years, Bearzi and Stanford describe the parallel evolution that gave rise to their intelligence… READ MORE about this lecture >

READ MORE about other upcoming lectures >