In this mid-week eSkeptic bulletin:

Show me the Body!

“I’ve always said ‘Show me the body,’ and now these guys claim that they have just that — a bigfoot body. However, remember the alien autopsy film from a few years ago—we need more than a photograph of a body, and if the body is shown to anyone, it should be a neutral scientific expert. Since the bigfoot body is in Georgia, I’ll be convinced if they take it to the Yerkes Primate Research center at Emory University, and if someone like primatologist Franz de Waal pronounces it genuine, then I’ll turn off my skeptical alarm bells and keep an open mind. Until then, I remain skeptical…

It now appears that the two men claiming to have “discovered” bigfoot faked a video showing a “scientist” examining the corpse, who turned out to be the brother of one of the bigfoot hunters. Although they are still claiming to have the real deal, this latest turn pretty much puts the story to rest. As we said, “show me the body”, not a photograph of a body, not a video of a body, and most certainly not a fake video of a fake scientist examining a body.

Summarized from Daniel Loxton’s two Junior Skeptic issues bound into
Skeptic magazines Vol 11 No 2 and Vol 11 No 3, we present a brief history behind the Bigfoot legend. Click the links above to order the back issues. 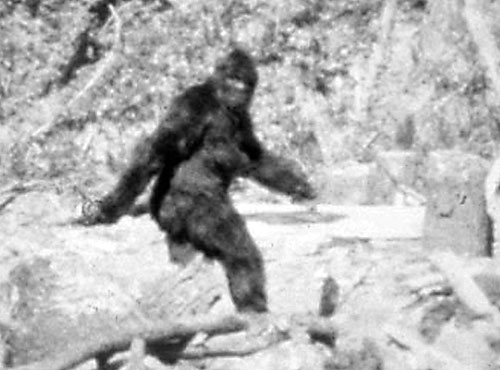 Patterson’s Bigfoot photo … or is it just a guy in an ape suit?

Behind the Bigfoot Legend — a History

Is really something out there? The modern sasquatch story started in Canada close to the U.S. border in Harrison Hot Springs, British Columbia, where an Indian Reservation teacher named J.W. Burns invented the term “Sasquatch,” and published stories the Chehalis Indian’s told about giant hairy humans.

While Bigfoot promoters suggest that Native American tales may be evidence of a real phenomena the stories vary too widely between Native American groups to be the result of actual sightings. For example, the west coast Bigfoot was a giant hairy human who lived in caves or villages and could even talk, not the ape-like animal of today’s legends. The East coast stories are quite different — their wild men could be cannibals, sometimes covered in stone who could “strike with lightning from their fingers.”

In 1957, as a publicity stunt, the town council of Harrison Hot Springs announced plans to sponsor a “Sasquatch Expedition.” They invited Swiss adventurer (and early sasquatch believer) René Dahinden to lead it. The stunt was a hit, generating publicity around the world. Said early sasquatch researcher John Green, then editor of the local paper, “Perhaps never before has a tourist resort achieved such publicity without actually doing anything.”

The media frenzy attracted “eyewitnesses” who claimed to have had encounters with Sasaquatch, and the most vivid account came from a highway worker William Roe who was the first to describe an ape-like creature rather than a giant hairy Indian: “I saw it was not a bear … My first impression was of a huge man … covered from head to foot with dark brown silver-tipped hair. But as it came closer I saw by its breasts that it was female.”

Albert Ostman also came forward. He swore he’d been kidnapped by an entire family of sasquatches who hauled him off in his sleeping bag and held him captive for days. Unfortunately both Roe and Ostman claimed their adventures had taken place some years earlier but they had never told anyone about it, suggesting their stories were inspired by the publicity stunt.

Bigfoot researchers were excited to discover a newspaper story in the Victoria Daily Colonist that went all the way back to 1884 about a hairy beast roused from sleep on the railroad tracks by an approaching train, and captured by the train’s crew. While this beast, dubbed “Jacko,” can still be found in listed in today’s Bigfoot books as a legitimate cryptological sighting, it has been known since 1975 that the tale was exposed as a newspaper hoax within days way back in 1884.

Sasquatch crossed the border into the U.S. when gigantic footprints were discovered one spring in a northern California logging camp near Bluff Creek. By late summer and into the fall, a greenhorn bulldozer driver, Jerry Crew began to find massive 16 inch tracks in the morning in the freshly leveled dirt around his machine. He cast the footprints in plaster and took them to a local paper which ran a story, giving rise to the term “Bigfoot” and sparking another flurry of worldwide interest. The story even attracted oil millionaire and monster hunter Tom Slick (who had hunted the yeti in the Himalayas) and other cryptozoologists who launched expeditions to find the Bluff Creek Bigfoot.

The mystery was solved in 2002 when the family of Ray Wallace, the construction contractor who supervised workers at the foot print site, announced in Wallace’s obituary that he had hoaxed the prints. While there was a certain amount of denial by big foot researchers, Wallace had a decades-long history of producing jokes and hoaxes. Bluff Creek footage was also the site of the next Bigfoot sensation — actual footage of a lanky ape-man loping along a stream bed — the famous Patterson film.

To believers the footage looked impossible to fake, to skeptics it looked like a guy in a suit. In 2004, Greg Long published “The Making of Bigfoot: The Inside Story” which examined Patterson’s character. Long discovered that there was no lack of witnesses — neighbors, friends, business associates and even Bigfoot researchers — who would describe Patterson as shady character who engaged in check fraud and other scams and who couldn’t be trusted. Ironically the film he used at Bluff Creek was purchased with a bad check, and he was arrested for grand larceny for stealing the camera he used. Before the Bluff Creek was shot Patterson made several low-budget Bigfoot films that showed he had plenty of experience creating fake Bigfoot-related footage. Long also claimed he uncovered the actual “man in the suit,” Bob Heironimus, who had acted in Patterson’s other Bigfoot films. Considering Patterson’s reputation it’s difficult to understand why Bigfoot researchers haven’t been more suspicious of the film.

But even if the early cases are hoaxes what about the other evidence — hundreds of sightings, thousands of tracks, hair samples, films, and even DNA tests. How good is it?

Most sightings come from grizzly country, so bears are prime suspects. Bigfoot enthusiasts like to point out the absurdity of mistaking a bear for a Bigfoot by running pictures of bears standing beside drawings of a sasquatches to show how different the animals are. But this argument is only made by people who have spent little time in the woods who don’t realize that one rarely gets to see even a fraction of the object one is trying to identify though the brush and shifting shadows.

Daniel Loxton recounts this difficulty from his years working in the north woods in British Columbia: “…We were used to bears … It was our job to notice everything. All the same, we quite often mistook sheep for bears, stumps for bears, and bears for stumps. Now, stumps and bears look nothing alike — certainly less alike than bears and Bigfoot! But, such illusions were common, especially at a distance. We even had a (not very imaginative) name. ‘Hey,’ we’d ask each other, ‘is that a grizzly, or a stump-bear?’ Sometimes they’d seem to move, but turn out to be logs. Other times “stumps” would walk away, bears after all … The truth is that bears really do look an awful lot like Bigfoot…”

What has been leaving those
thousands of tracks all these decades?

The most famous cases — usually the best cases — are unfortunately tainted by the likelihood that they are hoaxes. One such case is that of the famous cripplefoot tracks discovered near the now-abandoned mining town of Bossburg in Washington State. The tracks at first seemed authentic because one of them had a deformity. They were first discovered by Ivan Marx, a Bigfoot researcher who had recently moved to Bossburg. René Dahinden, the same man who had been involved in the original 1957 publicity stunt, reached the site next, took a plaster cast, and began searching the area with Marx, finding 1,089 well defined prints, an apparent rest area, and even a spot where the creature had relieved itself in the snow. More Bigfoot hunters arrived.

Marx continued to make astonishing finds — handprints, footprints, and even a film of Cripple Foot itself, luring Dahinden and other researchers back. They competed making offers of money for the as yet unseen film.

But after months went by it was discovered that they had been taken again — the film was blank. But within a year Marx resurfaced peddling a different fake film of a Bigfoot on TV.

Anthropologist Dr. Grover Krantz was one of the first real scientists to argue that Bigfoot really exists. Dr. Krantz argued that too many Bigfoot tracks have been discovered over the years for the tracks to be made by hoaxer, but his figures are inflated. He estimates there might be one hundred million different sets of footprints or over a billion individual footprints by the 90s alone, too many for hoaxers to fake. A few thousand is probably a better estimate. However Krantz’s book “Bigfoot Sasquatch: Evidence” is one the best of the pro-sasquatch books.

Another argument presented by Bigfoot advocates goes something like this: “I can’t think how this might have been hoaxed therefore it can’t be a hoax.” Dr. Krantz himself warned against this attitude by citing a case where widely spaced tracks led up a hill — too wide for a human to have made them. But it was discovered that the tracks were made by someone bounding down the hill wearing the feet backwards.

Why hasn’t anyone found a dead one?

In the 80 years since J.W. Burns published his Native American folk stories but no bones or other physical remains have been found. Some Bigfoot enthusiasts argue that bear bones are never found either, but this is not true at all. Daniel Loxton himself has found a bear skeleton. Are there no bodies because they are so rare? (Despite the hundreds of witnesses that have reported them.) Are they too smart to expose themselves to human hazards? Has no one finding one bothered to come forward despite the fame and fortune that would have been soon to follow? Or is it because they simply don’t exist?

How about hair samples and DNA?

So far most hair turned out to be from ordinary animals, or even synthetic “fun-fur.” Bigfoot promoters have often taken advantage of the fact that results of these tests are often “inconclusive,” implying that this means the hair is from an unknown creature, when all it really means is that the sample could not be identified. DNA would be ideal. But so far none has tested as an unknown primate or anything else unusual.

After 80 years much of the Bigfoot evidence has been discovered to be a hoax, or due to misidentification, and much of it is just useless anecdotes. What’s needed is an actual specimen. Until a specimen is produced the skeptics will continue to hold the field.