An excellent guide to the confusions and contradictions of alternative medicine written with clarity, integrity and authority. What works? Who can you trust? What alternative cures have positive results? What medical authorities are included in their “Top ten culprits in the promotion of unproven and disproven medicine?” Includes extensive information on the big four: acupuncture, homeopathy, herbs, and chiropractic, plus a “Rapid guide to Alternative Therapies.” ORDER the book >

An excellent introduction to modern bible scholarship by one of the world’s leading experts. Dr. Bart Ehrman explains how the New Testament texts have changed over the centuries and describes the methods scholars use to determine what has changed. Changes have occurred both through scribal errors and through deliberate alterations made for cultural and political purposes. While some of these changes are inconsequential, others have profoundly affected religious doctrine… ORDER the book >

PLUS these recent Lectures at Caltech now on DVD!

On this week’s episode of Skepticality, Derek & Swoopy explore the good, the bad, and the scary among television’s current crop of offerings — from Psychic Kids to The Mentalist.

Also, in a lead up to her favorite holiday, Swoopy ponders the pros and cons of being a skeptic on Halloween…

In this week’s eSkeptic, Michael J. Booker, Ph.D reviews Michael Dowd’s book entitled Thank God for Evolution! How the Marriage of Science and Religion Will Transform Your Life and Our World. (Viking Adult, 2008, ISBN 0670020451)

Dr. Michael Booker is Professor of Philosophy at Jefferson College in Hillsboro, Missouri (not to be confused with the Hillsboro in “Inherit the Wind,” which was actually the city of Dayton, Tennessee). He has taught over 200 sections of undergraduate Philosophy, primarily Logic, Ethics, and Introduction to Philosophy. His most recent publication is a critique of Bloom’s Taxonomy published in Academic Questions.

Science & Religion on the Rack

According to Greek mythology, there was once a bandit named Procrustes. He had a special bed which he would offer guests. This bed, he told them, would be exactly the right length for any person who slept in it. Anyone foolish enough to try to spend the night with Procrustes would discover that the bed was made of iron, and the kind host would either stretch them out or amputate them down to the precise length of his bed.

The Reverend Michael Dowd is a minister with the United Church of Christ. His book, Thank God for Evolution!, is billed as a novel reconciliation of science and religion. It comes with an impressive list of pre-publication praise from a wide range of individuals, including five Nobel laureates and a number of spiritual leaders. It is energetic, ambitious, and wide in its scope. Unfortunately, the book is also a textbook example of a Procrustean Bed.

In order to reconcile science and religion, Dowd does great intellectual violence to both science and religion. Religion undergoes the knife; science gets the rack. Dowd talks a lot about his religious tradition, but he doesn’t have much nice to say about it. He explains that the Bible is violent, cruel, and historically distorted. He wants Christianity and all other religious traditions to abandon their fanciful notions of soul, heaven, hell, and a transcendent God. He wants religion to divorce itself from all elements of the supernatural. Depending on one’s choice of definitions, he is looking for religions to stop being religious.

While silencing the faith-texts of the world, he has science saying some utterly bizarre things. Evidently, the truths of science are fixed to the point where he wishes to describe them as public revelation (as opposed to private revelation of the historic faith traditions). Dowd tells us that evolution is a fact, not a theory. Astonishingly, he states that science tells us that the universe is benevolent and that we can trust it. His most persistent source of confusion is using the word evolution in its popular form; as a synonym for progress. He explains evolution more or less correctly in Chapter Two and then devotes the rest of the book to using the term in the popular teleological sense.

His mixture of stretched-out science and mutilated religion he calls the Great Story. Dowd believes that once we outgrow the barbaric, provincial and absurd traditions of the Bible (he lists other scriptures as well, but doesn’t display much familiarity with them), we can still find a naturalistic faith. We can “ooh and aah” over photographs from the Hubble telescope, and marvel at our interconnection with other life forms. He boasts an essentially pantheistic god that, he says, even atheists can believe in. But describing a God that even atheists can embrace is rather like advertising an animal that even vegetarians can eat. Tofu turkey anyone?

It’s hard to see where any of this is especially new. Dowd does introduce some clever terms to frame the debate: flat-earth religion as opposed to evolutionary religion, for example. Yet his naturalistic religion is a fairly unimaginative mixing of liberal Christianity, Twelve Step programs, and a heavy dose of neo-pagan reverence for the biosphere.

What, then, is the point of the book? Early on, the author talks about how he and his wife have become “evangelists for evolution.” The two drive around and live out of a giant van, giving lectures on and selling books about science and evolution. In Chapter Sixteen, Dowd addresses indirectly an issue that should have been central in his book. The author’s church, the United Church of Christ, in on the decline just like many liberal, mainline Protestant churches. Those churches have low birthrates among their parishioners and an aversion to evangelizing. Surely any book that talks about evolutionary Christianity should look at that problem head-on. To succeed in a Darwinian sense, you must be more reproductively successful and do a better job of surviving than your peers. Globally, the fundamentalist and conservative religions are the ones that are growing.

If you had to wager on whether the United Church of Christ or the Church of Jesus Christ of Latter-Day Saints were more likely to be around in a thousand years, it would be better to look at their fertility rates than at their doctrines. Even among the Amish, the most traditional forms of the faith are growing faster than the relatively more open-minded variants.

If Dowd can’t convince liberal Christians to have more babies, then he needs to find some evangelical fervor. That’s really what this book attempts. Thank God for Evolution! is filled with exclamation points, testimonials, and cutesy expressions, such as describing the frontal lobes of the brain as your Higher Porpoise. It is filled with autobiographical details that make no sense in a serious text (do we really need to know that he and his wife have a nickname for the continent of North America?), but that would sound at home in a revival meeting. A visit to the book’s website (www.thankgodforevolution.com) confirms the suspicion that the book is connected with public appearances and Dowd’s evangelism campaign. The book, then, is an appeal to the heart, not to the head.

a response from Michael Dowd

In his review of Thank God for Evolution, Michael J. Booker (an academic philosopher) took me to task for writing that “evolution is a fact.” This is hardly a controversial claim, and in the book I support it with quotations drawn from the works of Theodosius Dobzhansky, Stephen Jay Gould, Neil Campbell, and Sean B. Carroll. Here I will add yet one more to the pantheon of quotations. This month the BBC aired a new television series on evolution: The Genius of Charles Darwin. Host Richard Dawkins begins his commentary, “In this first program I’m going to tell you who Charles Darwin was, explain how he discovered his theory of evolution, what it is, and why it matters. By the end I hope to have convinced you of the truth that evolution is a fact.” I do applaud Booker for bringing a very skeptical eye to my treatment of matters that religion and science bridge-builders of the past have all too often muddled. Broadly, Booker identifies this topic as that of “teleology.” My rebuttal: Nowhere do I suggest, or even imply, that there is a force or intelligence that is making evolution go in a particular direction. Nevertheless, when we look back at the course of billions of years of biological and social evolution, we can detect an emergent pattern of interdependence and co-operation arising at increasing scale of size and complexity. This is an empirical fact, not a statement of belief. Three billion years ago, the peak of Earth’s evolved complexity was expressed in carbon-based molecules maintained by processes co-operating at the scale of a millionth of a meter. Today, mutual support in the maintenance of peak (cultural) complexity occurs across distances measured in the millions of meters. 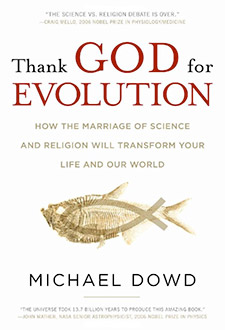 It is true that I interpret this trajectory in a way that many find religiously inspiring. I also, however, acknowledge that it is just as legitimate to interpret the same facts in a non-inspiring way.

When I write of chaos and “bad news” catalyzing evolutionary creativity, I’m not suggesting that a Supreme Being or divine intelligence is intending favorable outcomes. Rather, I maintain that we are meaning-making creatures and that raw facts will almost always be interpreted in our minds in ways that will motivate, discourage, or bore. Thus our interpretations do matter. Here is the key: We need not regard those interpretations as objective truth in order to find them subjectively appealing and pragmatically useful.

For example, the affirmation “the Universe is conspiring on my behalf” not only keeps my spirits up when a challenge comes my way, it also empowers me to act in constructive ways. As the great philosopher and father of American pragmatism, William James, wrote, “From a pragmatic point of view, the difference between living against a background of foreignness [an indifferent Universe] and one of intimacy [a benign Universe] means the difference between a general habit of wariness and one of trust.”

There is, of course, no guarantee that cultural achievements will flourish into the future. Natural or societal calamities could bring them down. Nevertheless, complex and increasingly co-operative civilizations are far more likely to thrive if religious people around the world are offered ways of thinking about science in general, and evolution specifically, that they can enthusiastically embrace.

Few things are more important, it seems to us, at least here in America, than for tens of millions of religious believers over the next few decades to come to embrace a science-based understanding of the world. Why? Because it matters what we think about evolution—and not just philosophically. It matters politically; it matters personally.

Connie and I stand together in this assessment: Until the majority of churches in America begin teaching evolution enthusiastically in religious education classes and preaching with conviction the practical benefits of an evolutionary worldview, then there will never be an end to the science and religion war, nor to the ever- mutating forms of religious opposition to the teaching of evolutionary sciences in public schools.