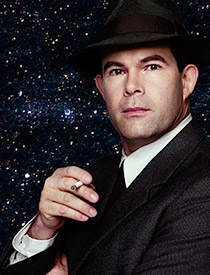 Oppenheimer the Opera
A Review of Doctor Atomic

Read Michael Shermer’s review of the Metropolitan Opera’s new production of Doctor Atomic, the story of the building of the atomic bomb and the brilliant but enigmatic J. Robert Oppenheimer, at Scientific American:

The Long Tail of Skepticism

What can regular skeptics actually do to enhance the appreciation of science and skeptical inquiry?

This question has been an ongoing theme for Skepticality, and this week’s guest has one answer to propose. In his audio essay, “Raising Our Game: The Rationale to Embrace Skepticamp,” software architect Reed Esau argues that “Skepticamps” (self-organizing peer conferences of intimate scale) can harness the potential of the “long tail” of the skeptical movement — offering a voice to all of us who have passion and expertise to share but who cannot take on the role of a “professional” skeptic.

These meetings are an experiment in the structure of a movement, and they are capturing the imagination of many new skeptics. What are the true implications for skeptical organizing? Is the advent of social networking technologies really the moment when everything changed?

Skepticality presents the essay in audio format, followed by Swoopy’s feature interview with Reed. Rounding out the discussion, Swoopy talks with Whatstheharm.net creator Tim Farley about his role in encouraging Skepticamp.

This week at SkepticBlog.org, Michael Shermer presents Part 2 of his Chronicles of Skeptica about his trip to the big science conference in Puebla, Mexico called “City of Ideas,” in which he and Dan Dennett debated Dinesh D’Souza and John Esposito on “Is Religion a Force for Good or Evil in the World?”

While you’re there be sure to read the blogs posts of the other Skepticbloggers: Brian Dunning, Kirsten Sanford, Mark Edward, Phil Plait, Ryan Johnson, Steven Novella, and Yau-Man Chan.