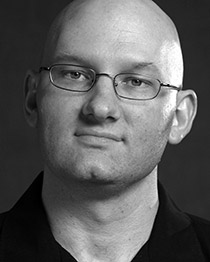 The Return of Ben Radford

This week on Skepticality we check in with author and paranormal investigator Benjamin Radford. A regular contributor to LiveScience.com and Managing Editor for Skeptical Inquirer magazine, Ben talks with Derek & Swoopy about his recently completed fourth book and his investigations into weird paranormal mysteries — including UFO sightings in New Jersey, the haunted hotel where President Obama stayed prior to his inauguration, and the claims of police department psychics.

In this week’s eSkeptic, Jeff Medkeff and Martin Rundkvist review A Sumerian Observation of the Köfels Impact Event by Alan Bond and Mark Hempsell. (WritersPrintshop, 2008, ISBN 978-1904623649)

Jeff Medkeff (1968–2008) was a computer programmer, an astronomer, a science writer and an educator. He discovered a number of asteroids, and in 2003 the International Astronomical Union recognised his contributions by naming asteroid 41450 Medkeff in his honor. In June 2008 Jeff Medkeff was unexpectedly diagnosed with cryptogenic liver cancer and he passed away less than two months later.

Dr. Martin Rundkvist is an archaeologist and journal editor based in Stockholm, Sweden. He is a board member of the Swedish Skeptics society, keeps the Aardvarchaeology weblog at Scienceblogs.com, and is Mr. March in the 2009 Skepdude pinup calendar. 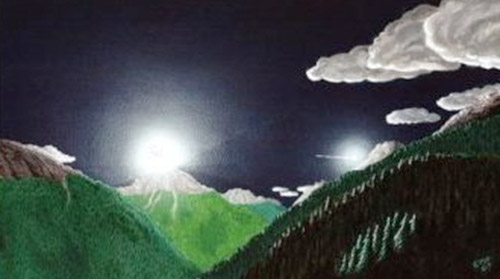 Fire in the Sky

According to A Sumerian Observation of the Köfels Impact Event, an asteroid entered the Earth’s atmosphere in 3123 BC and exploded above the Austrian Alps, triggering a major landslide. The authors also argue that during the final minutes of the object’s approach, it was observed by an astronomer in Mesopotamia who made detailed notes of the event, and by Neolithic people in coastal Croatia, who were inspired to depict it on their pottery.

The landslide is real. The Croatian pottery is real. The asteroid and the Sumerian astronomer, however, are in our opinion very poorly founded speculation. We take it that the authors are quite sincere about their work. But their assumptions are so many, and so outlandish, that this book would no doubt make William of Ockham’s head explode if he even glanced at it.

When considering the argument, we first need to know whether or not any extraterrestrial body did in fact contribute to the giant landslide at Köfels in Austria. If not, then the Sumerian connection is moot.

The Köfels deposit is about half a kilometre thick and measures five kilometres in diameter. It is very young in geological terms, dating from after the end of the last ice age. In 1936, geologist F. Suess published an extraterrestrial impact hypothesis to explain the formation. There is a lot of glass in it: a pumice-like mineral named köfelsite. Most geologists today believe that it formed when rock melted through friction in the landslide, but others still think it is more plausibly from an impact. Such impact events have created glass at other sites. The age of the Köfels deposit has been measured using radiometric methods, indicating that it formed at least 8,000 years ago — not 5,000 years ago as the book suggests.

As the authors readily admit, there is nothing resembling an impact crater at Köfels. Perhaps the strongest evidence for an impact origin of the structure was the reported presence of planar deformation features in quartz. They are microscopic features of silicate (e.g. quartz and feldspar) grains; basically very thin planes of glass arranged in parallel sets that have particular orientations with respect to the containing crystal’s structure. Such deformation is utterly diagnostic of impact events: no other geological event can form it, not even highly energetic volcanic eruptions. However, upon re-examination, Deutsch et al. found that shocked quartz with planar deformation is not present at Köfels. Instead, they saw quartz with lamellar deformation features typical of tectonic processes. Indeed, shocked quartz does not form through meteoritic airbursts: it requires a ground impact. Also, Hermanns et al. have shown that the Köfels features did not form through a single landslide, but are the result of several separate slides at different times. Currently, the consensus of scientific opinion is that Köfels is not an impact site. It is not listed in the Earth Impact Database, not even as a possible site. We need to know no more to discount the main argument of A Sumerian Observation.

Touchingly, the authors suggest that the reason that their asteroid exploded was that it struck a still apparently quite unharmed mountaintop a glancing blow some ways from Köfels. Yet by far the greater part of the book’s text is not about the Köfels deposit, nor about the movements of asteroids. It mainly deals in great detail with a fragmentary cuneiform tablet, most likely hailing from Layard’s mid-19th century excavations at Niniveh, and kept in the British Museum. To give A Sumerian Observation a fair airing, let us assume for a moment (credulously) that there was a meteoritic airburst at Köfels 5,000 years ago, and examine the Sumerian angle.

The first thing to note about the tablet is that it is not 5,000 years old, but dates from the 7th century BC. The authors suggest that it is a copy of a Sumerian astronomer’s observation log from a summer night in 3123 BC. The copier(s) has reproduced all diagrams on the original tablet exactly, but replaced the original’s early Sumerian script with updated 7th century cuneiform. The reason that this uniquely early piece of scientific documentation, and only this particular piece, survives is that according to the authors the asteroid airburst soon acquired great religious significance in Mesopotamia. In fact, they explain (p. 104) that “There are many ancient European and Asian myths that are not only indicative of a NEO [Near-Earth Object] impact, but contain detail very suggestive of this specific event. It was consideration of these myths that was the original focus of this study.”

Only about three fifths of the tablet’s surface survives, but even the well-preserved parts are almost incomprehensible. Though the script is clear, its contents are laconic and repetitive, more poesie concrète than narrative. Professional cuneiform scholars agree that the tablet has something to do with astronomy, but hardly anyone believes that any detailed meaning is recoverable. Again, touchingly, the authors admit in the preface that the tablet is only really comprehensible if one decides beforehand what it is supposed to say. “The third (and key) assumption is that [the tablet] records an observation of an Aten class asteroid that impacted the Austrian Alps at the locality of Köfels at the end of the Fourth Millennium BC.”

Sumerian script is the earliest known form of writing, first appearing some time between 3500 and 3300 BC. All extant inscriptions from c. 3100 BC and earlier are terse lists of goods. Almost a thousand years of writing pass before any sentence with a verb appears. The authors’ argument for ascribing their hypothetical original tablet such an early date is that it shows something they interpret as the celestial equator in something they interpret as the constellation Pisces. With a more cautious attitude, and with a bit more respect for the current state of Sumerian philology, we of course argue the reverse: since an original tablet cannot realistically date from 3100 BC, the tablet cannot be taken to depict the celestial equator in Pisces.

Even assuming against good evidence that an asteroid did explode at Köfels in 3123 BC, there is no reason to believe that the cuneiform tablet in question has anything to do with that event. Any half-crumbled hieroglyphic papyrus or weathered Mayan bas-relief, yes, any graffiti-covered restroom wall, could be pressed into service in the same way. But the tablet is the sole data source for the authors’ interpretive model of the supposed event, and the focus of most of the book. (The Croatian astro-pottery, mercifully, makes only a few brief appearances.)

The authors’ attempts at geology and Sumerian philology are far off the mark. Since this invalidates the astronomical inferences drawn, we shall only make two points on that subject. First, the hypothetical incoming object was, according to the authors, an asteroid of the Aten class with a density below that of water. This is nonsense. Aten class asteroids by definition spend all their time in the inner solar system. But low-density compounds do not survive for long in small bodies there, because volatiles evaporate or sublimate near the sun. This is a process we see with comets: sublimation creates the comet’s coma and tail. What remains after a few centuries of solar heating and mass loss in the inner solar system is rock. And well-observed Aten asteroids are known to have had fairly stable orbits for millions of years.

Second, according to the authors, the mechanism by which the Sumerians learned that the asteroid had hit the Earth and were inspired to re-write their mythology, is this. The non-impact threw up a plume of deadly ejecta directed back along the path the body had arrived on, which at that moment formed a low-pressure tunnel through the atmosphere. They have picked this idea up from what happened when the comet Shoemaker/Levy 9 hit Jupiter in 1994. But that impact was into a dense gaseous atmosphere with no solid surface, and the dynamics were very different from solid-body impacts. The mechanism that created the Jovian plumes does not apply on Earth. A low-pressure region on Earth cannot achieve as large a pressure difference as on Jupiter, and our atmosphere is significantly less dense to begin with. Furthermore, no ejecta form without a crater. The process that forms the crater causes the ejecta: WHAM. Yet there is no crater of a matching date anywhere on Earth. The lack of a Jovian-density atmosphere on Earth means that you cannot have Shoemaker/Levy-9 style plumes from your crater, and the absence of any crater means that you cannot have any ejecta in the first place.

Is this work pseudoscience or simply bad science? Whatever it is, it most certainly is a case of severe amateurism. The authors make radical inferences from philological, archaeological and geological data outside their area of expertise, and happily arrive at something they are not professionally equipped to understand: the movements of a celestial body. In the preface they suggest that their inspired insight has enabled them to interpret the cuneiform tablet in a completely new way. They explain the reason that no academic journal or book series has accepted their work is that academic reviewers are too narrowly specialized (and thus, it is politely hinted, narrow-minded) to appreciate this kind of interdisciplinary research. But good interdisciplinary research is done when specialists in different fields collaborate closely: not when specialists in a single field (here, astronautical engineering) make inspired forays onto the territory of disciplines they know little about.

Another writer who has spun tall tales about the enigmatic cuneiform tablet is Zecharia Sitchin. In his 1976 book The Twelfth Planet, the tablet is an astrogator’s chart from a time when space aliens ruled the Earth. And although A Sumerian Observation contains not one word about aliens, this is the company the book belongs with: the works of Sitchin, von Däniken, and Velikovsky.

Sympathy for the Devil

This week on SkepticBlog, Michael Shermer ventures into the turbulent waters of homosexuality and religion, by (surprisingly) coming to the defense of none other than Ted Haggard, the disgraced pastor who denounced homosexuality as a sin even while he was engaged in homosexual activities himself. Find out what makes Shermer feel sorry for Pastor Ted. READ the post >