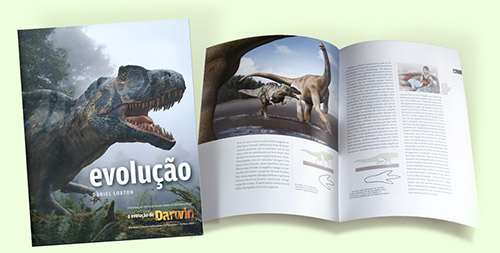 In commemoration of Charles Darwin’s 200th birthday on February 12th, 2009, the Skeptics Society is thrilled to unveil a major new educational outreach project: the release of the first Junior Skeptic book, Evolução (“Evolution”).

The book is published by our colleagues at the Calouste Gulbenkian Foundation (an international nonprofit organization headquartered in Lisbon) as part of an ambitious Darwin 2009 public education program with partners that include the American Museum of Natural History and the Portuguese Ministries of Science & Technology and Education. Their Darwin 2009 celebrations include the largest and more comprehensive evolution-themed museum exhibit in the world (“Darwin’s Evolution”), a high profile series of public conferences (to be opened by paleontologist Niles Eldredge on February 13th) — and the full-color book based on Junior Skeptic.

Wondering where you can get your hands on a copy? You’ll have to wait. This free Portuguese-language school edition is an exclusive educational project for students in Portugal.

But not to worry: an English-language version is in full production now at a major North American publisher! Look for the enhanced and expanded version scheduled for wide release early in 2010….

Want to support Junior Skeptic and other educational initiatives from the nonprofit Skeptics Society? DONATE through Shop Skeptic, or contact us to discuss earmarking a larger contribution.

Did Charles Darwin Steal the Idea
of Natural Selection?

On this, the 200th anniversary week of Charles Darwin’s birthday (12 February, 1809) and 150th anniversary of the publication of On the Origin of Species, there is a movement afoot in the UK to challenge Darwin’s priority in the discovery of natural selection, claiming that Darwin’s either stole or plagiarized the idea from Alfred Russel Wallace, his younger colleague who in 1858 was on the other side of the planet in the Malay Archipelago when he hatched his own theory of evolution and sent an essay version of it to Darwin that spring.

In this article for Forbes magazine, who has compiled a wonderful tribute issue to Darwin and evolution, Dr. Michael Shermer sets the record straight. Even though Shermer did his doctoral dissertation on Wallace and Darwin, and later penned a full-length biography of Wallace (In Darwin’s Shadow, Oxford University Press) and is an unabashed fan of the younger and less well-known naturalist, Shermer proves that Darwin stole nothing from Wallace and that, to the contrary, the two men were best of friends and collaborative colleagues.

with Dr. Donald Prothero, Dr. Michael Shermer, and others…

Come join us for a special celebration of the life and science of one of the greatest scientists in history. Historian of science Dr. Michael Shermer will review the remarkable life of Darwin and explain how he arrived at his theory of evolution. Paleontologist and geologist Dr. Donald Prothero will give a brief overview of how evolutionary theory has changed since Darwin’s time. And other scientists will consider the many aspects of Darwin’s remarkable theory.

On this, the 200th anniversary week of Charles Darwin’s birthday (12 February, 1809), we celebrate the power of deep time and nature’s processes to produce dramatic change, as Michael Shermer demonstrates how a solid hunk of lava rock can be ground down to fine grains of black sand, given enough time under nature’s power of erosion. READ the post >