NEW ON MICHAELSHERMER.COM
Shermer on Larry King Live
with the UFOlogists

A couple times a year, in between his celebfest of stars, Larry King hosts the UFOlogists who regale the talk show king with an endless parade of blurry photographs, grainy videos, and breathless tales of government coverups and conspiracies. Enter Michael Shermer to set things straight…
• WATCH the video •

NEW ON SKEPTICBLOG.ORG
Toward a Type I Civilization

In this week’s Skepticblog post, Michael suggests that the solution to our energy problems requires more than new technologies — it requires a new type of civilization.
• READ the blog post •

a chapter from The Science of Good & Evil 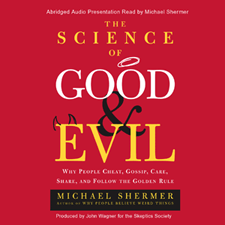 In his book The Science of Good and Evil, Dr. Michael Shermer tackles the question of why we are moral? That is, what is the basis for morality, how do we know the difference between right and wrong, and from whence did good and evil come, god or evolution? In this free audio download of the first chapter, Dr. Shermer considers whether moral principles are sound because they come from God, or that God approves certain moral principles because they are sound on their own, and if therefore moral principles stand alone — separate from whether or not there is a god. That is, can morality transcend religion and human convention? Can we get past the binary choice of morals being either absolute (always right or wrong) or relative (anything goes)? Here Dr. Shermer outlines his theory of morality based on evolutionary principles and the fact that we are a social primate species who evolved moral tendencies toward altruism, cooperation, and pro-sociality, and that we really are moral animals. DOWNLOAD the sample MP3 (17MB)

In this week‘s eSkeptic, Daniel Loxton, Editor of Junior Skeptic (and the organizer behind What Do I Do Next? 105 Practical Ways to Promote Skepticism and Advance Science) addresses the importance of Wikipedia. Find out how grassroots skeptics can help ensure that Wikipedia is a science-based public resource.

Is it Worth Paying Attention to Wikipedia?

Yes, it absolutely is. This is a shining opportunity for the skeptical movement. Wikipedia is among the most important public sources for almost any scientific, pseudoscientific, or paranormal topic. A Wikipedia article is almost always the number one Google hit for that subject.

Amazingly, any grassroots skeptic can make responsible improvements to that source at any time, easily and for free.

As you learn the ropes, move slowly & cautiously. Start small. Be bold, but edit carefully. Make a meaningful contribution to science & skepticism.

You can personally correct any Wikipedia article. As long as you can cite references, you can add the best available skeptical information to any article that needs it. When you add footnote references, you can even link directly to skeptical websites. You don’t need anyone’s permission. For simple text edits, you don’t even need web coding skills. Best of all, it’s rewarding and fun to use your skeptical knowledge to enhance an essential public resource.

Furthermore, we know from our internal traffic statistics that people really do follow up on the skeptical resources cited in Wikipedia articles. (More people find Skeptic.com through Wikipedia than through Google!)

For an in-depth primer, see “Why Skeptics Should Pay Close Attention to Wikipedia,” by Tim Farley.

How to Get Started

As a free encyclopedia anyone can edit, Wikipedia is an almost-utopian project — but it works. Why? Wikipedia has a culture of rules, and a vast community of editors who care about those rules. It’s easy for beginners to make mistakes, but (luckily!) the culture of Wikipedia is also easy to learn.

The key is that Wikipedia is an encyclopedia. It’s not a soapbox for you personally, for the skeptical movement, or for any other interest group. The standard for Wikipedia articles is therefore a “Neutral Point of View” or NPoV. (Wikipedia does have a special policy for pseudoscience that relaxes this NPoV standard, but Wiki editors should always strive for the highest degree of objectivity and rigor.)

To help maintain this, Wikipedia requires reliable third-party citations for opinions and statements of fact. It also requires that notable criticism of any group or concept be described (with citations), and that topics be accurately placed in context against the prevailing current of expert opinion. (Wikipedia’s NPoV policy requires that articles not give “undue weight” to fringe positions.)

These responsible policies open great opportunities for skeptics to contribute. When paranormal assertions are made without support from reliable references, these statements can be flagged for citation — or, where appropriate, removed. Where a paranormal article fails to acknowledge scientific criticism, or fails to place a fringe position in its proper context, this criticism or context can be added. Furthermore, citations can link to relevant skeptical resources.

Before getting started, please familiarize yourself Wikipedia’s formatting rules and Manual of Style.

Then, just go to the Wikipedia article for your favorite paranormal topic and see what needs fixing!

Wikipedia has a policy called Be Bold! If you see something wrong, fix it! Your corrections are not an imposition — they are the engine that drives Wikipedia.

But editing Wikipedia is still editing. By its nature, editing other people’s hard work calls for extreme care. As you learn the ropes, move slowly and cautiously. Start small.

Stick to the NPoV wherever possible. When a topic is “generally considered pseudoscience by the scientific community,” Wikipedia’s policy on pseudoscience allows the article to state that scientific verdict and label the topic as “pseudoscience.” Nevertheless, you should strive to remain objective and to avoid loaded statements. Avoid statements like “Astrology is fraudulent nonsense.” Instead, find relevant sources and cite them, as in this example:

Astrology is generally considered a pseudoscience by the scientific community. Skeptics argue that the concept is implausible,1,2 unintelligible,3 and unsupported by evidence.4,5 Notably, large scale tests such as (describe one) have failed to reveal any astrological effect.6 There is also strong disagreement within the community of astrologers. Some proponents contend that X,7 while others believe Y8 or Z.9

See a typo? Don’t even hesitate: hit the “edit” or “edit this page” buttons and make the change. Likewise, if you find vandalism (such as random obscenities) or obvious nonsense (“Uri Geller is a pterodactyl”) remove these immediately.

As you get the hang of it, you may wish to start adding “citation needed” flags, adding relevant references for disputed or unsupported assertions, or inserting new material. Take your time, and remember that Wikipedia has an error-correction mechanism: if you make a mistake (or push too hard) another editor is liable to reverse your edits.

You may eventually work your way up to more ambitious efforts, such as adding new articles. In the meantime, you have an opportunity to make a meaningful contribution to science and skepticism — right now, today. Wikipedia is only a click away, so get started!

Why Haven’t Skeptics Acted on this Before?

Actually, many skeptics are already working to ensure that skeptical subject matter is discussed responsibly on Wikipedia. In addition to the thousands of individual skeptics who make an occasional edit, there are also organized efforts underway.

One effort you may wish to join is the Wikiproject Rational Skepticism, a voluntary association of skeptical Wikipedia editors. These editors keep a watchlist of articles of interest, cooperating to keep an eye on those for improvement and ongoing maintenance.

This sort of vigilance is very important. Like you, paranormal proponents (or even deliberate con men) can change anything they like at any moment. An article that was fine yesterday might be crazy today — and it will stay crazy until an editor like you checks it and fixes it.

You may also be interested in a lower-traffic project external to Wikipedia, called Skepticwiki. This is a standalone, explicitly skeptical encyclopedia project that shares the format of Wikipedia.

Many skeptical Wiki editors tackle topics about skepticism: pages for various skeptical organizations and publications, or for prominent skeptics. Those efforts are very useful, but you may wish to concentrate on the areas where a skeptical eye is really needed — articles for paranormal topics.

When people turn to Wikipedia for information on iridology or “reptoids” or chiropractic, that article may often be the only source they consult. Or, if they do consult further sources, these may often be the sources cited in the Wikipedia article. Either way, paranormal proponents have been quick to load Wikipedia with content and citations that are friendly to their own claims. Sometimes, these articles are virtual commercials for paranormal industries. In those cases, skeptics can perform a valuable public service by bringing paranormal articles up to the NPoV standard with descriptions of skeptical criticism and references to relevant skeptical sources.

Oddly, the best Wikipedia topics for beginners are the most obscure. High-profile topics (like “CSICOP,” or “homeopathy”) attract lots of attention and edits from proponents and critics alike, leading to relatively neutral articles. That’s Wikipedia’s error correction mechanism in action: lots of critical eyes. Often, those topics stabilize to a tense compromise, watched like a hawk by opposed editors, with long arguments over small changes.

On lesser-known subjects, paranormal proponents have the freedom to make sweeping, biased, and wildly unsupported claims. These low-quality articles stand unchallenged until a skeptic eventually happens to review them. Finding and fixing these is fun and satisfying for skeptical editors. Because those articles are so bad, they are easy to improve — and edits will tend to stand for a longer time.