Author of the Pulitzer-prize winning Guns, Germs, and Steel and the bestselling work in environmental history Collapse, Jared Diamond reveals for the first time his methodology in the applied use of natural experiments and the comparative method. READ more…

The Mythbusters of Psychology

KARL POPPER WROTE: “SCIENCE MUST BEGIN WITH MYTHS and with the criticism of myths.” Popular psychology is a prolific source of myths. It has produced widely held beliefs that “everyone knows are true” but that are contradicted by psychological research. A new book does an excellent job of mythbusting: 50 Great Myths of Popular Psychology by Scott O. Lilienfeld, Steven Jay Lynn, John Ruscio, and the late, great skeptic Barry L. Beyerstein.

I read a lot of psychology and skeptical literature, and I thought I knew a lot about false beliefs in psychology, but I wasn’t as savvy as I thought. Some of these myths I knew were myths, and the book reinforced my convictions with new evidence that I hadn’t seen; some I had questioned and I was glad to see my skepticism vindicated; but some myths I had swallowed whole and the book’s carefully presented evidence made me change my mind.

The authors start with a chapter explaining how myths and misconceptions arise.

The authors discuss our susceptibility to optical illusions and other cognitive illusions, our propensity to see patterns where they don’t exist, the unreliability of intuition, and the fact that common sense frequently misleads us. They characterize science as “uncommon sense” — it requires us to set aside our common sense preconceptions when evaluating evidence. They cover 50 myths in depth, explaining their origins, why people believe them, and what the published research has to say about the claims. Everything is meticulously documented with sources listed. Here’s a sample of the myths they cover:

How the Relentless Promotion of Positive Thinking has Undermined America

In this utterly original take on the American frame of mind, Barbara Ehrenreich traces the strange career of our sunny outlook from its origins as a marginal 19th-century healing technique to its enshrinement as a dominant, almost mandatory, cultural attitude Ehrenreich exposes the downside of America’s penchant for positive thinking…
ORDER the lecture on DVD

The authors also list a total of 250 other myths in a brief “Fiction/Fact” format with suggested resources for further reading. Some of these facts intrigued me. Dreams occur in non-REM sleep as well as during REM sleep. Transcendental meditation yields no greater effects than rest or relaxation alone. Most women don’t have worse moods in the premenstrual period. Women are no better than men at guessing the feelings of others. Sexual content of ads may make people pay more attention, but they are less likely to remember the product’s brand name. There’s little or no evidence for the G-spot. Men don’t think about sex every 7 seconds — somebody just made that up. Individual efforts produce better quality ideas than group brainstorming sessions.

If you read this book, you may be challenged to give up some of your cherished beliefs. Some people find it painful to admit that they were wrong. I find it one of the greatest pleasures of skeptical inquiry and science. When I change my mind about something I don’t chastise myself for the original error; I congratulate myself for having learned better and for having achieved a better grasp on reality.

The proper stance of a skeptic or scientist is to defer judgment pending evidence. In practice, that isn’t always possible. We can’t take the time to thoroughly investigate everything we hear. It is reasonable to provisionally accept something that everyone says is true, that is compatible with common sense, that is plausible, and that is often based on some preliminary evidence. As long as we keep in mind that these claims may be based on inadequate evidence and we remain ready to change our minds when better evidence arrives. 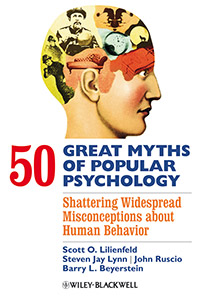 ORDER the book from Amazon.com

We’re all susceptible to this kind of error. The authors of this book fell for one myth themselves. In a short mention of medical myths they included this one: “eating too many carrots makes our skin turn orange.” Apparently they had read it on more than one list of medical myths. I wrote the lead author to tell him this was not a myth, but a recognized condition called carotenemia. It looks just like jaundice except that the whites of the eyes are spared. I had a patient with that condition, caused by eating lots of carrots on a weight-loss diet. She had bright red hair and with her bright yellow skin she looked like something out of a comic book — sort of like an anti-Smurf. It was very impressive. As a good scientist, Dr. Lilienfeld accepted the evidence and promised to amend the statement in subsequent editions.

Apart from carrots, I found nothing to criticize in this book. The authors have done us a great service by compiling all this information in a handy, accessible form, by showing how science trumps common knowledge and common sense, and by teaching us how to question and think about what we hear. I highly recommend it.

NEW ON SKEPTICBLOG.ORG
My Dinner with Bill (Gates that is)

In this week’s Skepticblog, Michael Shermer shares his experience having dinner with Bill Gates and discussing matters of business, economics, finance, world health, education, and nutrition and physical fitness.