The common narrative of Neanderthals is that they were a group of dullard losers whose extinction 40,000 years ago was due to smarter competition and a little of interbreeding with our own forebears. Likening someone to a Neanderthal was and, most likely, still is a top-rate anthropological insult. But, in the past few decades, Neanderthal finds have greatly contradicted our perception of the species. In Kindred, Rebecca Wragg Sykes combs through the avalanche of scientific discoveries of the species and uses her experience at the cutting-edge of Paleolithic research to share our new understanding of Neanderthals, shoving aside cliches of rag-clad brutes in an icy wasteland. She reveals them to be curious, clever connoisseurs of their world, technologically inventive and ecologically adaptable. They ranged across vast tracts of tundra and steppe, but also stalked in dappled forests and waded in the Mediterranean Sea. Above all, they were successful survivors for more than 300,000 years, during times of massive climatic upheaval. Shermer and Sykes also discuss:

Rebecca Wragg Sykes has been fascinated by the vanished worlds of the Pleistocene ice ages since childhood, and followed this interest through a career researching the most enigmatic characters of all, the Neanderthals. After a Ph.D. on the last Neanderthals living in Britain, she worked in France at the world-famous PACEA laboratory, Université de Bordeaux, on topics ranging from Neanderthal landscapes and territories in the Massif Central region of south-east France, to examining how they were the first ancient humans to produce a synthetic material and tools made of multiple parts. Alongside her academic activities, she has also earned a reputation for exceptional public engagement. The public can follow her research through a personal blog and Twitter account, and she frequently writes for the popular media, including the Scientific American and Guardian science blogs. Becky is passionate about sharing the privileged access scientists have to fascinating discoveries about the Neanderthals. She is also co-founder of the influential Trowelblazers project, which highlights women archaeologists, palaeontologists and geologists through innovative outreach and collaboration. 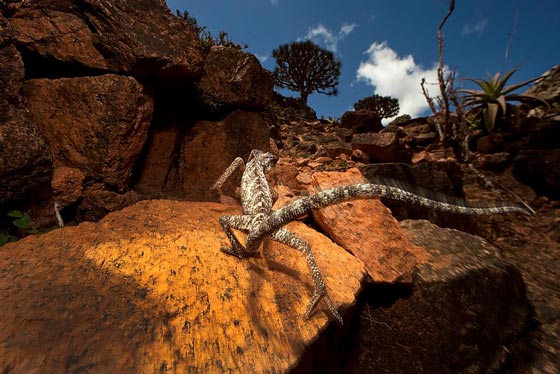 During a time when racism, bigotry, and even speciesism has become a topic of national conversation, evolutionary biologist and National Geographic photographer Mark Moffett @DoctorBugs considers how we might reduce them through what we’ve learned about how individual organisms within a species came to develop these characteristic.

This article appeared in Skeptic magazine 25.3 (2020) and expands upon an op-ed published in the Los Angeles Times on 4 August 2019 entitled “Are we really so different from other species?”

PHOTO ABOVE: The native animals on Socotra include several species of birds and 29 endemic reptiles, including the Socotra chameleon, Chameleon monachus. (Photograph © Mark W. Moffett)

I find it ironic to be weathering out Covid-19 in Brooklyn given that I’m a biologist who thinks of rainforest as my native habitat. Still, I feel fortunate to be a witness to what appears to be a global sea change: The air has grown clearer until the sky can turn a crystalline blue typical of mountain vistas. The squirrels and now superabundant birds — even one fearless racoon — have stared at us through our 4th floor balcony window as if we were zoo animals. Already the stories are legend. Coyotes prowl San Francisco and mountain lions relax in downtown Boulder as if cities were their native habitat. Those who deny humanity’s footprint on nature point to the fact we can’t prove that people are the culprit behind climate change or species loss, but now it seems we’re actually doing the experiment. Can we turn our perceptions of nature around for good and put an end to the environmental crisis?

One way forward will be to recognize a fact of human psychology: Our abuse of nature is linked to the equally pressing concern of our age, social disintegration as a result of war, terrorism, and inequality. All are manifestations of a basic human drive to distinguish ingroups from outgroups. In this connection lies the key to deactivating the effects of both.

Kimberly Costello and Gordon Hodson, psychologists at Brock University, Ontario, Canada, had research participants read essays enumerating the humanlike traits of animals. Mere exposure to this perspective led even their subjects with the most entrenched prejudices to think more kindly not only of other species, but of immigrants — to regard them more as equals — despite the fact that the essays had mentioned nothing about humans.1

I registered what appeared to be such a link myself when I traveled to Socotra, remote chunks of land, the largest 50 miles across, 250 miles off Yemen’s shore. Whereas the only other archipelagos with comparable biological diversity, the Galapagos and Hawaii, have experienced terrible species loss since human contact, there’s no sign that Socotra’s goat herders have driven species to extinction despite occupying those islands since the time of Christ.2 Socotra has remained ecologically intact because of how tribal elders orchestrated the movements of people and goats to reduce habitat destruction. In Socotra, I was struck, always, by the spiritual connection between herder and goat. Herders, who knew their individual animals well, would cradle the animal to be slaughtered. They would caress it, sing to it. The goat’s sacrifice wasn’t taken lightly. To eat isn’t to be superior. As remarkable as the Socotran respect for animals and nature was their nonviolent behavior toward each other. While war devastates Yemen’s mainland, until very recently no weapons were permitted on the archipelago. […]