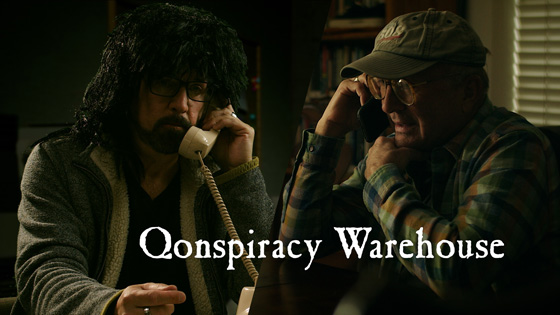 A film by Brian Dalton and Michael Shermer

In this special edition of eSkeptic we present a short (6-minute) film spoof on the creation of the QAnon conspiracy theory. For our serious analysis of QAnon please see our special issue of Skeptic magazine 25.4 (December 2020).

Daniel Loxton’s deep dive into QAnon, it’s origins and precursors, is especially revealing — and the best exposé of the conspiracy theory to date.

To understand the references in the film please note what, exactly, QAnon conspiracy theory promoters believe:

The conspiracy theory QAnon holds that there is a secret Satanic cult of pedophiles who have infiltrated the U.S. government led by politicians and celebrities such as Hilary Clinton, Beyoncé, Lady Gaga, and even Tom Hanks, and is being countered by former U.S. President Donald Trump in his efforts to suppress the power of the “deep state”. It is an expanded successor to the debunked 2016 “Pizzagate” conspiracy theory, which claims that Hillary Clinton and other prominent Democrats operate a child sex trafficking ring under a Washington, DC pizzeria called Comet Ping Pong. QAnon has emerged the past couple of years as the most popular conspiracy theory since the 9/11 Truther and the Obama Birther movements. 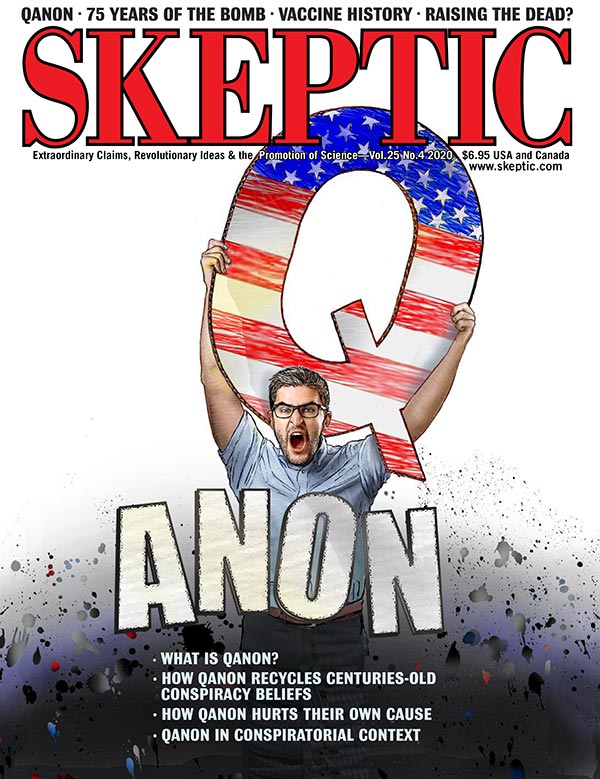 The idea that Satanists rule the world is a story of Lovecraftian horror in which the normal world is an illusion and a much darker true world lies just beyond the veil. And yet, QAnon believers are more excited than scared. People who “take the red pill” or “wake up” to the claimed conspiracy are offered a simple explanation for all of the world’s problems. They’re also offered a reassuring prediction for a better future: “What if I told you that those who were corrupting the world, poisoning our food, and igniting conflict were themselves about to be permanently eradicated from the Earth?” 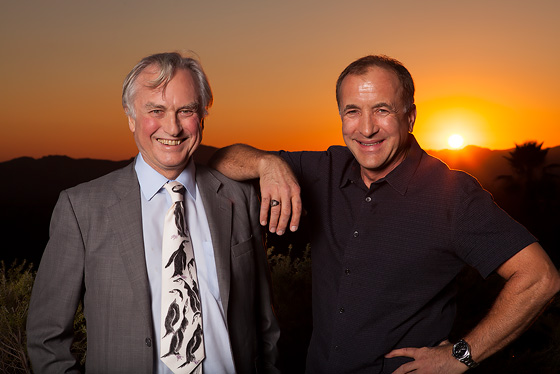 The following essay was commissioned by Oxford University Press to be included in a volume entitled Richard Dawkins. How a Scientist Changed the Way We Think: Reflections by Scientists, Writers, and Philosophers, edited by Alan Grafen and Mark Ridley (biologists and former graduate students of Dawkins) and published in 2006 to mark the 30th anniversary of the publication in 1976 of Dawkins’ influential book, The Selfish Gene. The volume includes essays by such notable scientists, writers, and philosophers as Steven Pinker, Daniel Dennett, Helena Cronin, Marian Stamp Dawkins, Ullica Segerstrale, David Deutsch, Michael Ruse, Patrick Bateson, Martin Daly and Margo Wilson, Randolph Nesse, David Barash, and many others.

The Skeptic’s Chaplain
Richard Dawkins as a Fountainhead of Skepticism

Over the weekend of august 12–14, 2001, I participated in an event entitled “Humanity 3000,” whose mission it was to bring together “prominent thinkers from around the world in a multidisciplinary framework to ponder issues that are most likely to have a significant impact on the long-term future of humanity.” Sponsored by the Foundation for the Future—a nonprofit think tank in Seattle founded by aerospace engineer and benefactor Walter P. Kistler—long-term is defined as a millennium. We were tasked with the job of prognosticating what the world will be like in the year 3000.

Yeah, sure. As Yogi Berra said, “It’s tough to make predictions, especially about the future.” If such a workshop were held in 1950 would anyone have anticipated the World Wide Web? If we cannot prognosticate fifty years in the future, what chance do we have of saying anything significant about a date 20 times more distant? And please note the date of this conference—needless to say, not one of us realized that we were a month away from the event that would redefine the modern world with a date that will live in infamy. It was a fool’s invitation, which I accepted with relish. Who could resist sitting around a room talking about the most interesting questions of our time, and possibly future times, with a bunch of really smart and interesting people. To name but a few with whom I shared beliefs and beer: science writer Ronald Bailey, environmentalist Connie Barlow, twin research expert Thomas Bouchard, brain specialist William Calvin, educational psychologist Arthur Jensen, mathematician and critic Norman Levitt, memory expert Elizabeth Loftus, evolutionary biologist Edward O. Wilson, and many others, all highly regarded in their fields, well published, often controversial, and always relevant.

Also in attendance, there to receive the $100,000 Kistler Prize “for original work that investigates the social implications of genetics,” was the Oxford University evolutionary biologist Richard Dawkins. (Ed Wilson was the previous year’s winner and was there to co-present the award, along with Walter Kistler, to Richard.) Dawkins was awarded a gold medal and a check for his work “that redirected the focus of the ‘levels of selection’ debate away from the individual animal as the unit of evolution to the genes, and what he has called their extended phenotypes.” Simultaneously, the award description continues, Dawkins “applied a Darwinian view to culture through the concept of memes as replicators of culture.” Finally, “Dr. Dawkins’ contribution to a new understanding of the relationship between the human genome and society is that both the gene and the meme are replicators that mutate and compete in parallel and interacting struggles for their own propagation.” The prize ceremony was followed by a brilliant acceptance speech by Richard, who never fails to deliver in his role as a public intellectual (the number one public intellectual in England, according to Prospect magazine) and spokesperson for the public understanding of science. […] 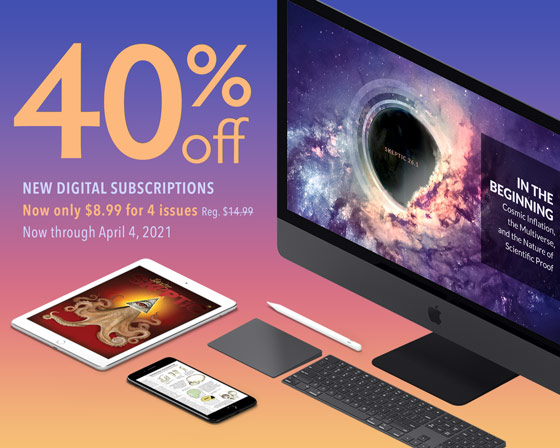 Now through April 4, 2021, enjoy 40% off new digital subscriptions to Skeptic magazine at PocketMags.com. Subscribe now and download the current issue (26.1 Cosmic Begining) instantly. Three more digital issues will follow as they are released (in June 2021, September 2021, and December 2021).