latest additions to
the reading room 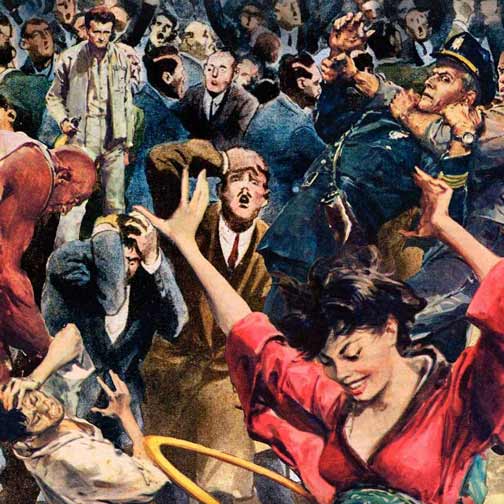 The Reading Room is an ever-growing library of articles offering in-depth, science-based examinations of myriad skeptical topics, written by leading experts in their fields.

Inequality & Rejection: A Data-Driven Look Into Men’s Attitudes Toward Abortion

Although abortion is often framed as a women’s issue, men make up half of the electorate and are more often pro-life. In this study the Skeptic Research Center report on men’s attitudes toward abortion is considered in the larger context of the national abortion debate, which has intensified since the Supreme Court overturned the 1973 Roe v. Wade decision guaranteeing women a Constitutional right to choose abortion.

In recent years the UFO phenomena has reached a new fever pitch over a handful of grainy videos and blurry photographs under the rubric of UAP, or Unidentified Aerial Phenomena. What are those objects in the videos and photographs? Alien spacecraft? Russian or Chinese spy drones? In this masterclass in analytical reasoning based on what little there is to assess, Mick West argues that the most famous of the UAPs, the Gimbal video, is most likely an artifact of the camera used to film it.

A three-part debate between Steven Pinker and Brian D. Josephson, initiated from a private email exchange in which Josephson challenged Pinker’s claims in a BBC radio program that there is no rational reason to believe in ESP. Here, Pinker first makes his case, followed by Josephson’s critique, and then Pinker’s response to that critique. As is our custom, we prefer to steel-man a position someone else holds, especially with a controversial subject like ESP, but better still is to have a proponent of it make the case for believing in it.

One of the surprise bestselling books of 2022 is David Graeber’s and David Wengrow’s book The Dawn of Everything: A New History of Humanity, in which they attempt to upend the standard and widely accepted model of how Hunter-Gatherer bands and tribes developed into chiefdoms and states. How accurate is their alternative history of humanity? In this review essay, Chris Edwards considers the evidence as presented in this compelling book.

With the widespread use of cell phone towers and internet technology, concerns have arisen over health effects of wireless energy, most notably with the recent introduction of Fifth Generation (5G) wireless network technology. Public health expert Raymond Barglow reviews the epidemiological data and science behind these concerns and shows that there is, in fact, nothing to worry about.

Listen to the Podcast The Michael Shermer Show is a series of long-form conversations between Dr. Michael Shermer and leading scientists, philosophers, historians, scholars, writers and thinkers about the most important issues of our time. Listen via Apple Podcasts, Spotify, Google Podcasts, Stitcher, Amazon Music, iHeartRadio, and TuneIn.

Rob Ashton — Silent Influence and the Science of Writing, Reading, and Communicating

Shermer and Ashton discuss: what it’s like advising Google and Buckingham Palace on how to communicate • what makes writing appealing and effective • how to write better emails and social media posts • why the messages we write often backfire • why emails so often make us angry • What makes Donald Trump such a powerful communicator that he can seemingly hypnotize tens of millions of people and dictate entire news cycles with a single statement? • when you should stop writing and pick up the phone to talk instead.

Shermer and de Salcedo discuss: her diagnosis of multiple sclerosis at age 27 • her long-term psychological strategy for living with a serious illness • what “eating like a pig” actually means • our 70-year-old “diet detour” • the obesity crisis • how dietary studies are conducted • the baseline health of lab rats • static vs. dynamic metabolism • diseases you can treat, manage, or prevent with exercise • cholesterol and statins • why exercise is more important than diet • how you can have your cake and eat it, too.

Shermer and Kirchick discuss: archives and secret sources of secret histories • the cause of homophobia, and how and why homosexuality was thought of as a “contagious sexual aberrancy” • why there is no lesbian history of Washington • J. Edgar Hoover, Clyde Tolson and gay mythmaking • FDR and Sumner Welles • why at the height of the Cold War, it was safer to be a Communist than a homosexual • Whittaker Chambers and Alger Hiss • the McCarthy hearings and how the Lavender Menace became inextricably linked with the Red Menace • astronomer Franklin Kameny and the Mattachine Society • JFK and his tolerance of homosexuality • Richard Nixon’s notorious homophobia • Ronald Reagan’s conflicting attitudes toward homosexuality • George H.W. Bush, Bill Clinton, and real progress in acceptance of homosexuality • the trans movement and its homophobic consequences.

Lucy Cooke — Bitch: On the Female of the Species

Shermer and Cooke discuss: the definition of male and female across the animal kingdom • male bias in the history of science • genes involved in sex determination and how they work • sexual selection • adaptationism vs. non-adaptationism • Why do women have orgasms? • why female animals are just as promiscuous, competitive, aggressive, dominant and dynamic as males • what humans can learn from non-human animals • maternal/paternal instincts • patriarchy/matriarchy across the animal kingdom • why the sexes are far more alike than they are different. 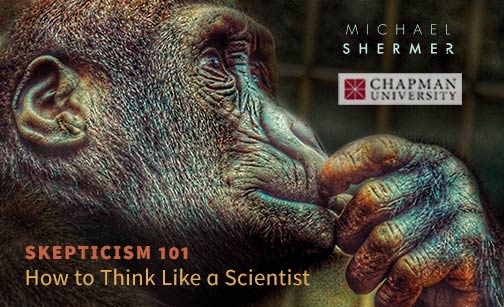 The Moral Arc: How Thinking Like a Scientist Makes the World More Moral

In this, the final lecture of his Chapman University Skepticism 101 course, Dr. Michael Shermer pulls back to take a bigger picture look at what science and reason have done for humanity in the realm of moral progress. Watch The Moral Arc: How Thinking Like a Scientist Makes the World More Moral.

What is Truth, Anyway?

In this lecture Dr. Michael Shermer addresses one of the deepest questions of all: what is truth? How do we know what is true, untrue, or uncertain?

The Skeptic Research Center (SRC) is a collaboration with qualified researchers to release digestible single-topic analyses of proprietary polling and survey data, detailing peoples’ attitudes about the important concerns of our time. Our data is open-source for full transparency. Our goal is to empower you with an understanding of what your fellow citizens really believe and how they really behave.

In the Paranormal & Conspiratorial Ideation Study (PCIS), we took a snapshot of Americans’ paranormal and conspiratorial beliefs. We surveyed people about all sorts of topics (e.g., QAnon, election conspiracies, the Loch Ness monster, astrology). As usual, we also have a host of variables that might be related in interesting ways to such beliefs, things like trust in media, emotional stress, and social belonging. Across a dozen research reports, we will delve into our most surprising results about who believes what and (perhaps) why.

In the Civil Unrest and Presidential Election Study (CUPES), we take a deeper look at the political issues that most divide people. Specifically, we examine peoples’ political and social attitudes as they relate to the George Floyd protests, the Coronavirus Pandemic, and the presidential election. 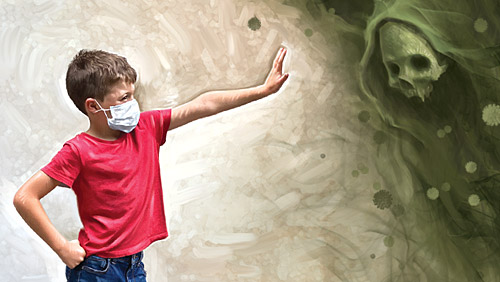 In this issue of Junior Skeptic we’ll confront one of humanity’s scariest enemies: epidemic disease. Are we brave enough to face this horror? You bet we are! We’ve done it every day during the COVID-19 pandemic. COVID is new. Other diseases have plagued our ancestors since ancient times. Mighty civilizations have been devastated by the invisible invaders we call “germs.” But people are not helpless! Over centuries, we learned how to fight back against disease. Our strongest weapons are science and critical thinking. However, germs have a powerful ally: misinformation! How do ignorance and bad ideas help the germs win—and what can we do about that? Let’s find out!

Skeptic Presents is a series of videos that promote science and critical thinking through the use of humor, wit, and satire. With your support, we hope to produce these instructional, educational, and entertaining videos regularly throughout the year for free viewing for everyone, everywhere, to spread the message of the power of science and skepticism to make the world a saner, safer place.

The Skeptical Studies Curriculum Resource Center is a comprehensive, free repository of resources for teaching students how to think skeptically: books, reading lists, course syllabi, in-class exercises, presentations, student projects, and videos that you may download and use in your own classes.