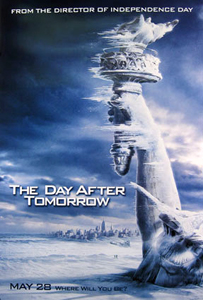 A Review of The Day After Tomorrow

a movie review by Steven Korenstein

It is every scientist’s nightmare: you’ve made the discovery of a lifetime, your evidence is solid, and the conclusion is that everyone is going to die … but no one will listen. Climatologist Jack Hall (played by Dennis Quaid) faces this dilemma in the new disaster film The Day After Tomorrow, and he discovers that he is in for one long night. Unfortunately, so are the viewers of this film.

Although global climate change is complex, and our models are filled with uncertainties, after viewing The Day After Tomorrow there is only one certainty—this is a truly dreadful movie-going experience. The special effects are spectacular, but director Roland Emmerich, of Independence Day fame, dips so often and so liberally into the bag of cinematic clichés that one must simply groan: amidst cataclysmic environmental change, we have to sit through the trial and tribulation of teenage romance (that includes a love-triangle, of course), as well as the tragedy of a poor, blind, bald-from-chemo-therapy child clutching his copy of Peter Pan. There are the obligatory evil politicians and bureaucrats, the predictable altruistic sacrifice of beloved friends, and the daring rescue of all our heroes. One can only sit through seven or eight tragedies before rooting for hypothermia to peaceably end our own misery. 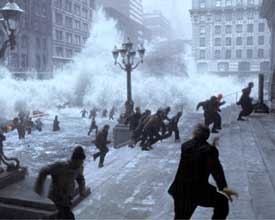 Plot problems aside, however, what is the scientific premise? The protagonist, climatologist Jack Hall, has discovered that because of the greenhouse effect, the world’s climate is in for a dramatic shift to a new ice age. This may seem paradoxical, but Hall explains that global warming could trigger a cooling trend through a process he has discovered—the warming caused by the anthropogenic production of greenhouse gases emitted into the atmosphere triggers a cascade of events in which major glaciers melt, lowering the salt concentration of high-latitude oceans. This change in salinity effects global oceanic circulation which, in turn, causes polar temperatures to suddenly drop, creating an ice age in the northern latitudes, and other dramatic meteorological events elsewhere. At first, Hall believes that this effect will take decades to centuries to occur, but he later learns that it will all unfold over the course of a week! It is at this point that science is surpassed by science fiction. The rest of the film slogs through the ice and snow as the few survivors stay warm enough to get through to the credits.

At this point we can ask two questions: (1) How accurate is the science? (2) What are the political and social policy points?

How Accurate is the Science?

Scientifically, the writers have selected a theory that does have at least one foot in reality. Climate change could occur through processes at least similar to that described in the film. These theories deal with any change in threshold for some system, such as the salt concentration in the ocean. Known as the global thermohaline circulation (THC), this system consists of cooling-induced currents that sink at high latitudes (at least in the Atlantic) and rise at equatorial latitudes. This system of up and down welling allows warmer equatorial waters to move to higher latitudes, making for a comfortable climate farther north than we might otherwise predict. The THC is maintained by differences in water densities fed by atmospheric heat and water exchange. For example, if global warming produced greater water evaporation in those areas expected to be the warmest, say around the equator, this could cause a great change in water salinity (increased because the loss of fresh water would concentrate the salt in the remaining water). Increased salinity would make the ocean water denser and cause the water to sink in a region in which we would have expected up-welling.

This scenario would dramatically change large-scale currents, which in turn could affect global temperature patterns, possibly cooling northern latitudes as warm equatorial waters fail to flow north; or worse, the flow could reverse, bringing cold high latitude waters south. (Keep in mind this explanation is a gross over-simplification of very complex global models, but accurately reflects the reasoning behind them.) So, the film’s rational for abrupt climate change is not, ex post facto, wrong. The conditions required for such a rapid change have been documented over the course of the last few years. For example, in December 2003, one published in the well-respected journal Nature showed that tropical waters have become saltier over the last 40 years. The scientists observed that as surface waters in the tropics have become more saline, high latitude waters have become fresher, thus less dense and less likely to sink. Additionally, this trend was reported to be increasing since 1990, a period of the 10 warmest years on record since 1861. Where the film errs is not the foundational science, but in the time frame. It’s not that a little hyperbole is wrong in making a fictional account of science. But, the producers of The Day After Tomorrow have taken artistic license and run amok. The speed at which acknowledged “rapid climate change” could reasonable occur in is on the order of decades, and that’s fast, at least on geologic time scales. To have the audience accept hours is beyond the credulity test.

As for policy and politics, the film rather accurately portrays the current administration’s reluctance to accept the evidence before us. This is not to say that there is no room for debate on issues of scale and remedy, but the head-in-the-sand attitude of the fictional President and VP (not too cleverly disguised as Bush and Cheney) brings to light the United States’ reluctance to address a rather broad body of scientific evidence that change is occurring; although the global ramifications may never reach the levels this film portrays, even the Pentagon is on record as affirming the potential widespread problems, should the current models prove even partially true.

The June issue of Science and Theology News features a two-page spread on The Science of Good and Evil as part of their featured author section. It includes an author bio, book description, and a short article I wrote, based on one of the sections in the book, on free trade and war.

Mark Perakh recently wrote a book entitled “Unintelligent Design” (Prometheus Books), which is reviewed by Paul R. Gross in the forthcoming issue of Skeptic magazine. We looked at Paul Gross’s own new book, “Creationism’s Trojan Horse” (Oxford University Press), in eSkeptic on Tuesday, June 1, 2004. Turning the tables, Mark has sent us this additional comment on our review of Gross’s book. Because much of the literature on what might be called the “New New Creationism” is fairly technical, additional commentaries such as this are important. Here, Parakh focuses on Dembski’s “No Free Lunch” (“NFL”) theorems.

I have read Dr. Bruce Grant’s review of Forrest & Gross’s book in the June 1 issue of e-Skeptic. I fully agree with Grant’s overall high mark he gives to the reviewed book and with his remarks about ID and its proponents. However, there is one point in Grant’s review which, in my view, requires some correction.

I am not blaming Grant—he is a biologist and is not expected to be an expert in the No Free Lunch theorems. He relied on Allen Orr, who also is a biologist. In Orr’s review (which has many good points) of Dembski’s book, No Free Lunch, one of Orr’s critical remarks (where Orr refers to the No Free Lunch theorems), can unfortunately be misintepreted. I had an exchange of messages with Dr. Orr about this point and Orr kindly accepted my comment. With his consent, I posted a brief essay clarifying both the actual contents of the NFL theorems and Orr’s critique at www.talkreason.org/articles/orr.cfm. A more detailed discussion of this matter is found in my chapter in the anthology Why Intelligent Design Fails: A Scientific Critique of the New Creationism (eds. Matt Young and Taner Edis, Rutgers University Press, 2004). It is regrettable that Grant repeated Orr’s point without correction.