The Skeptics Society is sponsoring another Galapagos Islands expedition, to be led by Darwin scholar Frank J. Sulloway. Sulloway will be continuing with research for his book In Darwin’s Footsteps: Discovery and Change in the Galapagos Islands. This research involves reconstructing Charles Darwin’s route in the Galapagos Islands during his historic visit there with H.M.S. Beagle in 1835. In addition, Sulloway and his expedition team will be trying to document ecological changes in the Galapagos, which have occurred as a result of depredation by feral animals and invasion by nonnative plants. Sulloway will take new photographic images at the same places where older (1905-1980) images have been taken.

During this expedition, which will be Sulloway’s eighth to these islands, he and other expedition members will climb 4,900-foot Fernandina, one of the most active volcanoes in the world. Expedition members will also retrace Darwin’s footsteps to the summit of Santiago, where Darwin camped for a week and collected numerous specimens. Finally, the expedition will visit various crater-studded landscapes on San Cristobal, where Darwin did much of his geological research.

The expedition has applied for National Park permits to visit, and to camp in, regions that are off limits to tourists. There are currently openings for three people to accompany the expedition. Michael Shermer joined Sulloway’s last expedition to the Galapagos Islands, as did two other Skeptics Society members, and they all considered it to be an extraordinary experience. People who are interested in accompanying the expedition may sign up for one or more consecutive field trips, which each lasts between 5 and 12 days and will take place between 5 January and 12 February 2005. The cost of the expedition will be prorated based on the number of field trips. For further information, contact Frank Sulloway (University of California, Berkeley) at [email protected].

Do you know why no one takes the Holocaust deniers seriously? Here is an example.

Last week a stranger e-mailed me a brief question, which I took to be an innocent one and to which I tried to provide a short but polite answer. He asked:

Good morning Dr. Shermer. A family member of mine has expressed an interest in being cremated as part of their funeral. A local funeral director has informed me that he can complete the cremation in approx. 10 seconds. Doesn’t his claim violate the laws of physics and thermodynamics? Any input you could give me would be most appreciated.

I responded: “10 seconds is absurd! He must have misspoken and meant 10 minutes. But I’m not sure what the actual time should be.”

Well, it turns out that this fellow is a Holocaust denier, going by the moniker “holographic,” who posted this little exchange on something called “The Revisionist Forum,” on Tuesday, October 26th, 2004. “Post subject: Dr. Michael Shermer, Professional Skeptic…almost.” He began by saying: “I thought would share this recent e-mail exchange between Dr. Shermer and myself, it’s priceless!!”

This individual thought he had really scored and had gotten me to admit that the Holocaust was a hoax because here I have apparently revealed my ignorance of the time it takes to burn a body. In other words, the deniers imply, if you can’t burn a body in 10 seconds, that means that they could not have burned thousands of bodies a day at Auschwitz and other death camps. If they could not have burned that many bodies, then the six million figure is greatly exaggerated. If the six million figure is not true, then the Holocaust itself never happened. That’s denier “logic”.

Here is the rest of his interpretation of our “exchange” (note the symbol in the word Holocaust):

Now remember, Dr. Shermer is a believer in the Holocau$t. He did have the decency to at least have a civil debate on the matter with Mark Weber. He’s “not sure” what the actual time should be!?! Why it’s 8.33 per minute, 500 per hour, 12,000 per 24 hrs. It’s easy doctor! Debate? not yet, but I’m gonna whallop him soon. Remember, Shermer has a BA, MA, and PhD, which means he’s skeptical about things most of us have never even heard about.

I wrote a book on these pinheads entitled Denying History: Who Says the Holocaust Never Happened and Why Do They Say it? (University of California Press available at www.skeptic.com). I have an entire chapter on their tactics, so in a way I am delighted to see that they have not changed, since they continue to support my thesis.

For example, David Irving, at his British libel trial against Deborah Lipstadt and Penguin Publishing (he was suing them for, among other things, calling him a Holocaust denier), claimed that there are no holes in the roof of Krema II at Auschwitz-Birkenau (a standard claim he got from the literature published by, uh, well, the Holocaust deniers!), leading his fans to wear t-shirts proclaiming, “No Holes, No Holocaust.” 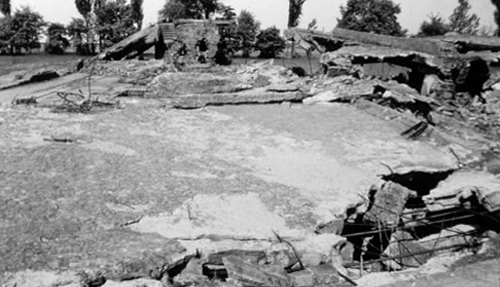 Krema II at Auschwitz-Birkenau in its current state

Well, I went to Auschwitz-Birkenau to check it out myself. In point of fact, in January of 1945 the Nazis running the camp dynamited all four Kremas at the camp, leaving mostly concrete rubble. Still, you can make out where the undressing rooms were, the gas chambers, the crematoria retorts, etc. And parts of the concrete ceiling are still extant. 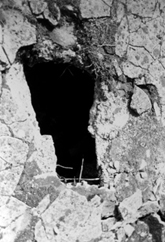 A ceiling hole at Krema II?

I present for you here two photographs that at Krema II at Auschwitz-Birkenau, one of the general area showing how run-down and destroyed it is, another close-up of what might have been a hole in the ceiling (the holes are where the SS guards poured the Zyklon-B gas pellets into the subterranean gas chamber).

I also present from my book a very disturbing photograph taken by a Greek Jew named Alex with a smuggled camera, looking out of the door jam of the door leading into Krema V (Krema I, by the way, is at Auschwitz I, a different camp from Auschwitz II, AKA Auschwitz-Birkenau).

The photograph shows the SS guards burning masses of bodies on the ground outside of the crematoria. The reason they had to do this is because the crematoria were not built to be run at such a high rate, and they consequently broke down, forcing the guards to burn the bodies in mass piles outside. 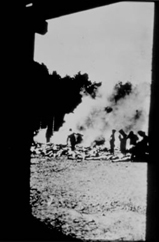 For these and dozens of other photographs, including aerial photographs I obtained from U.S. military archives of Auschwitz and had analyzed by aerial photograph experts at NASA’s Jet Propulsion Laboratory in Pasadena, check out Denying History. I am very proud of the book because it is such a meticulous and thorough debunking of the deniers, and serves as an example of how one can treat history as a science. I partially blame the rise of the Holocaust denier movement on the postmodern, deconstructionist view of history that there is no way to know what “really happened” in the past, therefore everyone’s opinions and feelings about the past are equal.

Here is the posting from the described denier.