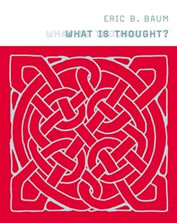 David A. Voron, M.D., has been in the private practice of dermatology in Arcadia, California, since 1974.  He is past president of the Los Angeles Metropolitan Dermatology Society and currently a media spokesperson for the American Academy of Dermatology.  Dr. Voron is board certified in dermatology and dermatopathology, and is a Clinical Professor Emeritus at the Keck USC School of Medicine.  He has been a reviewer for the Journal of the American Academy of Dermatology and has authored fourteen medical publications.

Is That All There Is?

What is really going on in our brains when we think? Is the process of thought just the electrochemical activity of a mass of inter-connected preprogrammed neurons? As Peggy Lee asked, “Is that all there is?” Eric Baum’s answer in his book, What is Thought? is “Yes, Peggy, that is all there is!” We humans are just robotic “meaning in life” overachievers.

What we find meaningful is determined by the mechanistic interaction of the physical world with our physical brains, evolved and optimized over billions of generations of organisms. Our understanding of the structure of the world, which to us seems so self-evident, is encoded in our DNA. That sounds like a far stretch, even for pure materialists, but Baum, a computer scientist with undergraduate and graduate degrees from Harvard, and a Ph.D. in physics from Princeton, is convincing.

Baum explains that his choice of book title was inspired by Erwin Schrödinger’s What is Life?, published in 1944, nine years before the discovery of the structure of DNA. Schrödinger, a co-inventor of quantum mechanics, felt the answer must lie in physics and chemistry. Baum’s thesis is that just as physics and chemistry answer the question “What is life?”, they must also answer the question, “What is thought?” Baum’s mission is ambitious:

My goal is to lay out a plausible picture of mind consistent with all we know, and in fact to lay out what I argue is the most straightforward, simplest picture of mind. I accept no mysticism; assume that we are just the result of mechanical processes explainable by physics; accept that we are created by evolution; … and bring to bear whatever seem like hard results from a variety of fields, including molecular biology, linguistics, ethology, evolutionary psychology, neuroscience, and computational experimentation.

The brain, like all other objects in the universe, is a structure operating under physical laws. Our DNA codes its algorithmic computational processes, which have been repeatedly refined since the beginning of life on earth. Whatever computations enhanced survival and reproductive fitness were passed on to future generations. Our brains have evolved reinforcement mechanisms to guide our behavior in the direction of propagation. For example, Baum notes, “Nothing could be more clearly negative reinforcement than physical pain,” and “Nothing could be more clearly positive reinforcement than orgasm.” Other forms of behavior guided by programmed reinforcement mechanisms are seeking parental approval, caring for children, and jealousy.

We may also resist Baum’s insight that “the things we feel most strongly about we should be suspicious of.” This is because, “We believe things strongly because we are evolved to, not necessarily because they are true.” For example, the conviction that we have free will is so intense that it overcomes the power of rational argument. “The conclusion that we do not really have free will,” Baum says, “is after all a very abstract conclusion, of interest only to philosophers and stoned college students late at night.” Our genes built our belief in free will into us because it is a very useful theory for predicting the behavior of ourselves and others. Similarly “built in” are our responses to the inputs of the sensors of our nervous system. These responses likewise drive our behavior in a way that promotes the interest of our genes.

But let’s not forget that our enjoyment of life is part of the survival repertoire with which evolution has equipped us. If our ancestors hadn’t keenly felt life was worth living, we wouldn’t be here now. Baum reflects: “Thankfully, the fact that I can intellectually understand that my mind is nothing but an evolved computation does not in any way detract from my enjoyment of life, or from my desire to live a fruitful and moral life.”

No doubt Peggy would agree: If all we are, my friends, is an evolved computation, “let’s keep on dancing … and have a ball.”