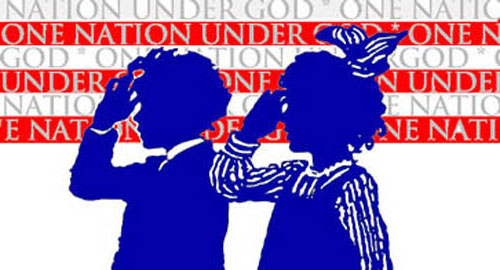 The Church, the State,
the Pledge, and the Law:
Adventures in Skeptical Activism

Earlier this year the country was riveted to and rocked by the story of the man who single handedly got the words “under God” removed from the Pledge of Allegiance, only to have it overturned by the United States Supreme Court, in front of which he argued his case. Now hear the story of Mike Newdow from the man himself, as he recounts his adventures in this and other causes he champions in the name of skepticism, rationality, and science.

Mike Newdow is a board certified emergency physician, who was taught by Jared Diamond while a medical student at UCLA. He is also a graduate of the University of Michigan Law School. In addition to his interest in Establishment Clause matters, Newdow has worked on constitutional challenges to many of the basic tenets that underlie family law. He will talk about his work in these legal fields, emphasizing how the lack of skepticism results in significant harms.

On Wednesday, December 8, from 8-9 pm (ET/PT), The Science Channel and Emmy-award winner Bill Nye will kick off a new primetime series, 100 Greatest Discoveries, dedicated to exploring the landmark scientific revelations that have significantly changed the world.

with Bill Nye, the Science Guy

Where would we be today without scientific curiosity? The eight-part series features lively and dramatic accounts of how the great discoveries of science were made, how they impacted the development of scientific knowledge and how they touch our lives today. Each episode of The Science Channel’s 100 Greatest Discoveries showcases scientists from the earliest days of science who have questioned the underlying nature of the universe to the scientists of today who continue to examine what makes the human race and Planet Earth tick.

Nye’s insightful interviews from the field with the day’s leading scientific experts feature some of the Nobel Prize-winning scientists who have made great discoveries, including Professor Murray Gell-Mann, a Nobel laureate who discovered the quark (a fundamental particle that makes up protons and neutrons), and Dr. Marshall Nirenberg, another Nobel laureate who cracked the genetic code and unlocked the genetic secrets of the human body.

In the new series, Bill Nye also focuses on the greatest discoveries in different fields of study: earth sciences, evolution, biology, medicine, genetics, chemistry, physics, and astronomy. The list of 100 Greatest Discoveries was developed in consultation with the National Science Foundation and the American Association for the Advancement of Science and editors of its journal, Science, and covers everything from how the center of the Milky Way emits radio waves to how insulin balances blood sugar.

The series includes a program on Charles Darwin’s voyage of the Beagle and his development of the theory of evolution, and includes Nye’s guest Richard Milner, on board the nineteenth-century sailing ship USS Constellation, which somewhat resembles Darwin’s famous ship. Skeptics know historian of science Richard Milner for his acclaimed one-man musical, most songs for which include evolutionary themes. (For those in New York City, Milner will be performing his updated show with new songs around the time of Darwin’s birthday, Feb. 10, 11, and 12th. The three-day run will be presented by the New York City Atheists, Inc. Mark the date on your calendar. For tickets, or to book Milner in your area, contact: Jeannine Frank at 310 476 6735 or [email protected]). Visit 100 Greatest Discoveries website.