We need your help! If you would be willing to put our Caltech Conference (“Brain, Mind, and Consciousness”) brochures into faculty mail boxes at your local university or college, we will send you however many you think you can use. The best departments, of course, are psychology, neuroscience, philosophy, and biology (you can probably pass on LitCrit PoMo departments!). Our conference is May 13–15, so if interested please contact us immediately to give us your mailing address and how many conference brochures you would like. If you have a group email list you would like to send out a link to our web page (www.skeptic.com/conf/conference.html) that would also be deeply appreciated.

Also, if you are in the Southern California area, we could use some help promoting our Sunday, April 24 event with Bill Nye the Science Guy. We have brochures promoting this event and if you contact us, we’ll send you some to pass out to schools and friends and kids you know who might like to attend. Thank you for your help.

In 1999, Frank J. Sulloway and I conducted a study on religious attitudes that included a question asking survey takers to explain in their own words why they believe in God. The most popular reason given was: “Good design, natural beauty, perfection, and complexity of the world or universe” 1. As pattern-seeking primates, we have a natural tendency to look for and find design in nature. Before 1859 the default explanation for that design was a top-down designer, God. This was most forcefully argued by the 18th-century English theologian William Paley: If one stumbled upon a watch on a heath, one would not assume it had always been there, as one might with a stone 2. A watch implies a watchmaker. Design implies a designer.

In 1859, Charles Darwin provided a scientific explanation of design from the bottom up: natural selection 3. Since then, arguably no one has done more to make the case for bottom-up design than the Oxford University evolutionary biologist Richard Dawkins in a series of books that includes the aptly titled The Blind Watchmaker 4, a direct challenge to Paley. But if design comes naturally from the bottom up and not supernaturally from the top down, what does that imply about the existence of God? Although most scientists avoid the question altogether or take a conciliatory stance along the lines of Stephen Jay Gould’s non-overlapping magisteria (NOMA) 5, Dawkins unequivocally concludes: “Darwin made it possible to be an intellectually fulfilled atheist” 4.

Dawkins has generated controversy within the ranks of evolutionary theorists for his strict adherence to Darwinian natural selection (“random mutation plus non-random cumulative selection” in his succinct description) as the only mechanism of evolutionary change worth bothering about – Gould called him a “Darwinian fundamentalist” 6 – but it is his statements about religion that have drawn attention to him from outside the scientific community. Now, in Dawkins’ God, we have a book-length analysis by Alister McGrath, professor of historical theology at Oxford. With professional training in the sciences as well as theology (he earned a doctorate in molecular biophysics), McGrath is well qualified to assess Dawkins’s literary corpus.

The book begins with an engaging first-person account of McGrath’s own journey from atheist to theist, emphasizing the shortcomings of the former and the strengths of the latter 7. During his time as a graduate student at Oxford, McGrath began to explore the relation between science and religion, which led him to realize that Christianity was more sophisticated than his atheism allowed him to appreciate. “While I had been severely critical of Christianity as a young man, I had never extended that same critical evaluation to atheism.” When he did, he discovered “that the intellectual case for atheism was rather less substantial than I had supposed.” At the same time, he was reading Dawkins, whose conclusions were just the opposite; thus was born this book, decades in the making.

After a brief tour of the life and science of both Darwin and Dawkins, McGrath addresses Dawkins’s vision of evolutionary theory as a complete worldview. “I’m a Darwinist because I believe the only alternatives are Lamarckism or God,” Dawkins explains, “neither of which does the job as an explanatory principle” 8. Because science supports Darwinism, the implications are broad and deep. “The universe we observe has precisely the properties we should expect if there is, at bottom, no design, no purpose, no evil and no good, nothing but blind pitiless indifference” 9. What place, then, for God?

The remainder of Dawkins’ God consists primarily of a point-by-point critique of Dawkins’s writings on religion, which McGrath sees as too simplistic and full of easy-to-topple straw men. McGrath summarizes his position thusly: (i) “The scientific method is incapable of adjudicating the God hypothesis, either positively or negatively.” (ii) “God need not be invoked as an explanatory agent within the evolutionary process” (to be subsequently dismissed). (iii) “The concept of God as ‘watchmaker,’ which Dawkins spends so much time demolishing, emerged as significant in the eighteenth century, and is not typical of the Christian tradition.” This is, in essence, Gould’s NOMA – science and religion serve different purposes using different methods, and attempts to bring them into harmony or conflict cannot be logically justified.

Then how do we know there is a God? Faith. According to Dawkins, faith “means blind trust, in the absence of evidence, even in the teeth of evidence” 10. This, says McGrath, “bears little relation to any religious (or any other) sense of the word.” In its stead McGrath presents the definition of faith by the Anglican theologian W. H. Griffith-Thomas: “It commences with the conviction of the mind based on adequate evidence; it continues in the confidence of the heart or emotions based on conviction, and it is crowned in the consent of the will, by means of which the conviction and confidence are expressed in conduct.” Such a definition – which McGrath describes as “typical of any Christian writer” – is an example of what Dawkins, in reference to French postmodernists, calls “continental obscurantism.” Most of it describes the psychology of belief. The only clause of relevance to a scientist is “adequate evidence,” which raises the follow-up question, “Is there?”

Obviously McGrath must think there is, but he never says. On this point I found the book frustrating. As McGrath’s relentless deconstruction of Dawkins unfolds, he repeats, over and over, that religion offers a worldview every bit as sophisticated and worthy of respect as science. His defense of religious faith is a passionate and honorable one, and he demonstrates that some of Dawkins’s characterizations of religion are indeed overly simplistic or selective, but he never delivers an answer to the God question. The closest thing to an argument for God’s existence I could find in the book is this: “Why should God require an explanation at all? He might just be an ‘ultimate,’… one of those things we have to accept as given, and is thus amenable to description, rather than explanation.” That may be, but like all other arguments made in favor of God’s existence, this only works as a reason to believe if you already believe. If you do not already believe, science cannot help you.

I was eager to read Dawkins’ God because of the gladiatorial weight of the contestants and what they represent. And although McGrath presents many side issues in a pleasantly readable fashion (e.g., Darwin’s religiosity, the historiography of science and religion, and how and where religion embraces science), he dodges the biggest question of all, the question at the heart of Dawkins’s writings: Is there a God? Whether Dawkins is simplistic or sarcastic or sardonic is a secondary issue. By elevating it to the primary focus of the book, McGrath missed an opportunity to make his case, pace Dawkins, and give us the very best arguments in his arsenal. With McGrath, I still do not know why he believes in God. With Dawkins, there is no doubt about where he stands. 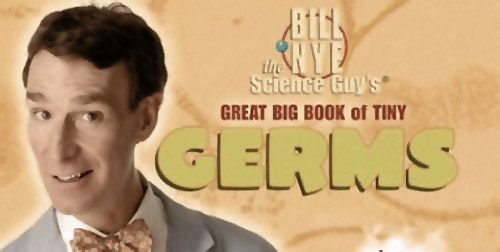 Sunday, April 24th, 2:00 pm
at the Beckman Auditorium, Caltech, Pasadena, CA
(please note that this is a different location at Caltech,
adjacent to our regular Baxter Lecture Hall venue)