The next eSkeptic will contain a complete review of our annual Caltech conference this past weekend, which was a smashing success with over 700 people in attendance. In the meantime, this eSkeptic features a short announcement about another conference at which I will be speaking next week (on a related topic), followed by my review of a very interesting book, Freakonomics (William Morrow, 2005, ISBN 006073132X), originally published in the Los Angeles Times Book Review, Sunday, May 15th, 2005. 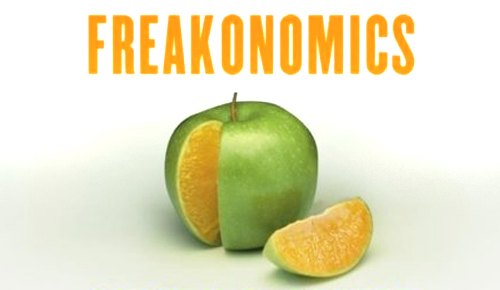 What the Numbers Can Reveal

In a quarter-century of serious cycling I have heard all the rumors about performance enhancing drugs, from stimulants in the 1970s, to steroids in the 1980s, to blood boosters like Erythropoietin (EPO) in the 1990s. A friend who knows my penchant for exposing fraud suggested I track the winners’ speeds from the Tour de France to note the increase after 1991, the year he says EPO was introduced. Since my friend won the Tour three times, I figured it was worth checking.

EPO? Maybe. But there are other factors. Composite materials led to lighter and stronger bikes. Clothing was more aerodynamic. Nutrition and training were more scientific. The racing field grew in size, from an average of about 120 in the 50s, to about 190 in the 90s (more riders accentuates drafting and increases speeds on the numerous flat stages). The race was shortened by almost a thousand kilometers over the past half century. And with sizable increases in prize monies, sponsorships, and endorsements that came with the Tour’s elevated international fame (especially in America) in the 1980s (when my friend, who helped to instigate these changes, was racing), the selection pool of elite bicycle racers deepened, thereby elevating the average quality (and thus speed) of the Tour as a whole.

Are these factors enough to account for the statistical spike in the 90s? Additional tests could resolve the matter, such as comparing the split times on crucial mountain stages between top riders and average riders, pre- and post-1991, under the presumption that the top riders would be employing the best performance enhancing drugs under the direction of the most knowledgeable sports physicians. A significant difference between top riders but not between average riders, pre- and post-1991, would be compelling evidence of artificial performance enhancement.

My model and inspiration for this exercise in data comparison came from Steven Levitt, an economist at the University of Chicago who is shaking up his profession by employing standard methods from the social sciences to very nonstandard questions from the real world. A 2003 article in the New York Times magazine about Levitt by journalist Stephen Dubner led to their collaboration on a book with the improbable title Freakonomics (so named for the freaky subjects they explore). An expanded version of that essay, Freakonomics was primarily written by Dubner and is a hodge-podge of Levitt’s polymathic interests. Although the authors eschew any central theme, I took from it two messages:

For example, Levitt devised a clever algorithm to analyze data from Chicago public schools to reveal that some teachers were helping their students cheat on state exams by filling in answers to later harder questions in a very predictable fashion (always the same block of correct answers). Further, there was a spike in the scores one year, followed by a decline to earlier performance levels. Retests on these same students proved that they did not know the answers to those harder questions. The teachers were fired.

In a related computation, Levitt discovered that Sumo wrestlers were fixing some of their matches. In order to rise in rank and earn more money, a wrestler must finish a tournament of 15 matches with a winning record. Levitt found a pattern of cheating whenever a 7-7 wrestler (with a lot to gain) was pitted against an 8-6 wrestler (with little to lose) on the final bout of a tournament. A 7-7 wrestler’s predicted win percentage against an 8-6 opponent is 48.7%, whereas the actual win percentage was 79.6%. The next time these two wrestlers met when there was nothing at stake, however, the 7-7 wrestlers won only 40 percent of the rematches. “The most logical explanation,” Levitt concludes, “is that the wrestlers made a quid pro quo agreement: you let me win today, when I really need the victory, and Ill let you win the next time.”

Levitt has also exposed real estate agents who sell their own homes for much higher prices than the homes of their clients; and he discovered that although top echelon drug dealers are wealthy, the vast majority live with their mothers because the pay works out to only seven bucks an hour.

Levitt’s most controversial computation to date involves the dramatic drop in crime rates in the 1990s. The reason, he says, was not tougher gun control laws, capital punishment, decreasing unemployment, or a stronger economy. The cause was Roe v. Wade. Research shows that children born into impoverished and adverse environments are more likely to grow up to become criminals. After Roe v. Wade, millions of poor, single, teenage women had abortions instead of future potential criminals; 20 years later the pool of potential criminals had shrunk, along with the crime rate. Levitt’s syllogistic logic is as follows: “Unwantedness leads to high crime; abortion leads to less unwantedness; abortion leads to less crime.” Of course, Levitt is quick to add that the solution is not more abortions, but “providing better environments for those children at greatest risk for future crime.”

Correlation does not always mean causation, and explaining crime is an extremely complex and multivariate problem. Nevertheless, Levitt shows that the five states that legalized abortion two years before Roe v. Wade witnessed a crime fall earlier than the other 45 states. Further, those states with the highest abortion rates in the 1970s experienced the greatest fall in crime in the 1990s, and the entire decline in crime was among the post-Roe younger age group, not among older groups.

More generally, and as a further test of his hypothesis, Levitt demonstrates that shrinking the pool of criminals decreases the rate of crime through three additional factors: increased rates of imprisonment accounts for a third of the drop in crime (compared to capital punishment, which accounts for only 1/25th of the decrease), increased number of police (who remove criminals from the system) accounts for 10% of the crime drop, and the bursting of the crack cocaine bubble caused profits to collapse along with the incentive to sell it (and thus the accompanying violence declined), accounting for another 15% of the crime plunge.

The kind of statistical tools that Levitt employs are simple yet elegant. He cuts to the core of a question, and he picks problems that are damn interesting, even if some of them seem trivial. All social scientists should read this book and ask themselves if the problems they are working on are as interesting or important as those in this superb work, and if they are using the best available methods for understanding them.