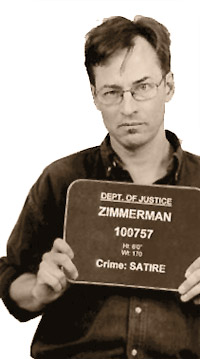 Singing satirist Roy Zimmerman, the surprise hit of the 2005 Skeptics Society Annual Caltech Conference has returned to Los Angeles for a one-evening show (intimate 100-seat concert hall). Roy is joined by the publisher of The Realist magazine, author Paul Krassner. (This is not a Skeptics Society event, but one we’re sure will be good!)

Zimmerman is described by the LA Times as “…lacerating wit and keen awareness of society’s foibles … a latter-day Tom Lehrer,” and by Joni Mitchell “Roy’s lyrics move beyond poetry and achieve perfection.” Krassner is described by the NY Times as “an expert at ferreting out hypocrisy and absurdism from the more solemn crannies of American culture,” and by the San Francisco Chronicle as “absolutely compelling.” 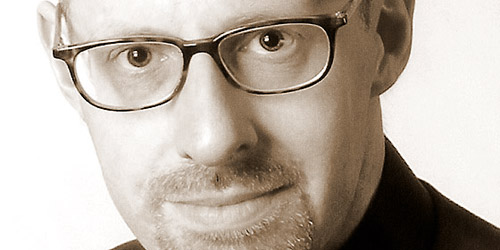 Luck, ESP & Magic :
How a Scientist Tests the Unusual

This will be one of the most enlightening and entertaining events of the season. Dr. Wiseman has established an international reputation for research into the scientific examination of unusual areas within psychology. This work has been reported in over 40 academic journal articles, including Nature, Science and Psychological Bulletin. In addition, he has co-authored 6 books and presented over 50 papers at both national and international conferences. His lecture will cover his many interests, including: the Luck Project, lying and lie detection, the psychology of magic, eyewitness testimony, the psychology of the paranormal, ghosts and hauntings, and experimenter bias in ESP research. Dr. Wiseman heads the psychology lab at the University of Hertfordshire, but he started his working life as an award-winning professional magician so he may just dazzle the audience with a little magic when he discusses his latest book: Magic in Theory: An Introduction to the Theoretical and Psychological Elements of Conjuring.

We’re slowly migrating our past lectures onto DVD (previously available only on VHS). Some of the latest DVDs:

In this week’s eSkeptic, Rebecca Watson describes Skepchicks, an organization of smart, skeptical women who are dedicated to the promotion of critical thinking. By sponsoring initiatives, funding scholarships, and encouraging discussion and debate, they hope to increase the number of women in the community of skeptics.

Rebecca is a writer and skeptical activist living in Boston, MA. Her articles and essays have appeared online and in newspapers and magazines across the United States.

I’m lying on my bed in my underwear, checking the settings on my new digital camera. I program it to take ten photos with three seconds between each one, and then I reach out and balance it on a wobbly easel standing at the foot of the bed. I press the shutter button and a light blinks.

One, two, three, I count to myself. At that point, my cat springs onto the bed and begins nuzzling my face. I gently try to push her away, which has the unfortunate consequence of causing her to believe we are playing a game. As the subsequent flashing of the camera records a stop-motion montage of an awkward girl in her underwear trying and failing to look sexy while a cat climbs onto her head, it strikes me as absurd that critical thinking actually got me in to this.

Let me explain. I am a skepchick. That is to say, a skeptic chick. The word “chick” is considered demeaning by some people, but I’m young enough that it is nothing to me but a favorable replacement for “lady” or the dreadful “gal.” So I embraced the term “skepchick” from the moment I was so labeled by a group of fellow female critical thinkers on an online forum.

That’s what else you should know about me – I post to an online forum, a community of skeptics who come together to discuss, debate, and dissect the various issues of the day, from psychics to fake moon landings to Bigfoot.

The particular forum I joined – my first foray into what I assumed was the anti-social world of electronic correspondence – was the one run by the James Randi Educational Foundation (JREF). Upon being proclaimed a “skepchick,” I asked the women if there wasn’t some special process I had to complete before achieving such a status. They recommended I eat copious amounts of chocolate and prepare to be worshipped. I thought they were kidding.

In the land of the nerds, the double “x” chromosome is queen. The lack of women getting actively involved in skepticism has led to a peculiar deification of any female brave enough to dive into debates, engage in philosophical arguments, or just withstand the flirtatious banter that permeates online forums. The skepchick is held up as an ideal in an intellectual community – a woman who is smart, interesting, and most of all, approachable.

Despite what I saw as a distinct willingness for men to accept and embrace (sometimes literally) skeptical women, there were just not that many around. Somehow, the word was not getting out.

I eventually became a member of a number of other forums, most of which heavily overlapped one another in terms of users. One was a small, private site made just for a few dozen skeptical women to unwind and connect with one another. It was there that we were able to organize and execute an idea that had been floating around the community since the first skepchick wandered into a forum: the Skepchick Calendar.

To be honest, we had no great, idealistic intentions. We thought it would be fun; we thought we would sell a few to the people in our skeptic circles and get enough money for a scholarship to help out a skepchick in need. As a bonus, I hoped that it would improve the self-esteem of the participants, many of whom I had heard in the past criticize their own looks. 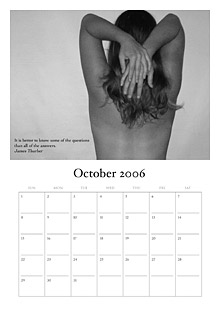 sample from the in-progress 2006 SkepChicks calendar

None of the women were professional models or photographers, and they ranged in age from their 20s to their 50s. I appointed myself dictator-for-life of the project, and laid down the rules: black and white, nothing lewd, no one had to show her face or give away her name, and each photo must have serious artistic merit. The day after I established the groundwork, the first photo was posted.

She was in a large bath, her back to the camera with her head turned slightly. It was beautiful and professional, and this from a woman who once mentioned her inability to ever take a good photograph of herself. She told us that she had done it by setting the timer and balancing the camera on the edge of the tub. She took more than 60 photos, and at one point she knocked the camera into the water. It’s true what they say: beauty is not easy. It would take another seven months to collect the other eleven photos, and half of the women who initially expressed interest would be unable to complete the project.

We knew that there would be controversy. Just after we began the project in February 2005, I came across a forum discussion in which the participants were excitedly exploring the possibility of doing a similar project. The woman leading the discussion eagerly suggested a fully nude calendar in which objectionable body parts were covered with oversized science-related props. When I informed them that I had a calendar project already underway, the woman grew solemn and declared she did not support it because she did not trust us to produce something “tasteful.”

From then on, we kept the calendar a secret. When we launched it in September, we decided that the best way to deal with the negative comments was to just be positive, which is difficult for me because I consider a biting irony to be one of my top three traits, just after my finely honed sense of justice and my natural talent for skeeball. For instance, when one person demanded to know, “What’s the point? What does this have to do with skepticism?” I cheerfully reiterated who we are and what our goals are, instead of asking if she also wrote to the Susan G. Komen Foundation demanding to know what a 10K walk has to do with breast cancer research.

The most common complaint was that we were using our bodies to make money. It didn’t occur to these people that we were also using our brains, our passion, and our creativity, all of which made our physical appearance almost incidental. When reading over negative comments, I noticed that the people who complained the most vocally about our project inhibiting our ability to be taken seriously were apparently the only people who were not taking us seriously. I had set up a simple Paypal system to receive payments, and as the orders began to trickle in, I noticed that people were writing little notes in the form – simple things like, “What a great idea,” and “I’ve been waiting a long time for an organization like this.” We also immediately began receiving e-mails through the site, such as one from a dad who wanted to know how his teenaged girl could get involved in skeptic activism, and many more from women who were excited to see an organization for people like them, and offering their help in any way they could.

The positive response was overwhelming. I had opened up a post office box and a checking account just before the web site launched, and I needed to come up with a name to apply to the accounts. I chose “Skepchicks, Intl.” because apparently I’m not as clever as I like to believe when it comes to quick thinking. As sales and publicity increased, I decided that Skepchicks, Intl. should continue past the fundraiser, to encourage women to get involved in the community of skeptics. Now, I’m faced with running an actual organization, dedicated to changing the world for the rational. Looking at the incredibly smart and supportive women and men who are on board with me, I believe we just might.

To get involved, support the organization, or purchase the Skepchick 2006 Calendar, go to www.skepchick.org.