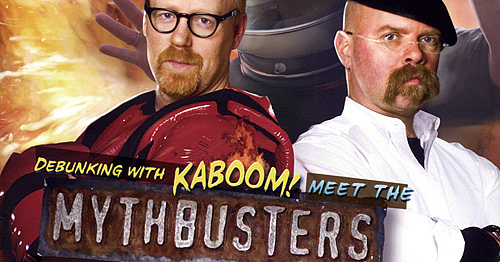 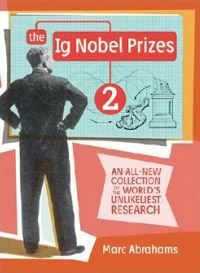 cover of the book by Marc Abrahams

In this week’s eSkeptic, Rebecca Watson tells us about her experience at the 2005 Ig Nobel award show — honoring achievements that first make people laugh, then make them think.

Rebecca Watson is a writer and skeptical activist living in Boston, MA. Her articles and essays have appeared online and in newspapers and magazines across the United States. She is one of the founders of the Skepchicks (www.skepchick.org), an organization of smart, skeptical women who are dedicated to the promotion of critical thinking. By sponsoring initiatives, funding scholarships, and encouraging discussion and debate, they hope to increase the number of women in the community of skeptics.

You can listen to highlights from the 2005 Ig Nobel Award Show via Science Friday’s podcast. Audio can be downloaded by clicking one of the audio links on their website.

For all the exciting things that science has given the world — from penicillin to television to ridiculously tiny cell phones — the people working to advance our knowledge of the universe have developed a reputation for being a bit stodgy. The average person on the street may likely view scientists as humorless introverts studying the life and habits of yeast. In my experience, this reputation is completely undeserved; the yeast researchers I know are actually rather funny introverts.

An ever-growing portion of the scientific community is working to combat this negative stereotype. Since 1991, the Ig Nobel Prizes have honored those people who have done something that first makes people laugh, and then makes them think. Sponsored by the Annals of Improbable Research (AIR), the Prizes are awarded annually in a lavish gala taking place in that bastion of intellectual integrity — Cambridge, Massachusetts.

Past winners have included a group of scientists who published “The Constipated Serviceman: Prevalence Among Deployed US Troops,” which included a numerical analysis of bowel movement frequency; and Lawrence W. Sherman of Miami University, Ohio, for his report “An Ecological Study of Glee in Small Groups of Preschool Children.”

Most winners were available in person to accept their awards; speeches were limited to sixty seconds, disappointing absolutely no one. The rule was enforced by a young girl whose sweet demeanor belied her unwavering commitment to staving off boredom. More than one speaker was cut short via the foolproof method of the girl announcing, in monotone, “Please stop. I’m bored.”

Unfortunately, a few distinguished invitees were unable to attend. The “Internet entrepreneurs of Nigeria” were awarded “for creating and then using e-mail to distribute a bold series of short stories, thus introducing millions of readers to a cast of rich characters, each of whom requires just a small amount of expense money so as to obtain access to the great wealth to which they are entitled and which they would like to share with the kind person who assists them.” These noble contributors to the greater good proved extraordinarily difficult to find despite their seemingly ubiquitous nature.

Highlights of the show included an opera based upon the show’s theme, “Infinity,” lectures on topics such as “Life” delivered first in 24 seconds and then in seven words or less, and the very popular “Moments of Science” — silent on-stage science experiments.

I confess that I am not a scientist. I am a science groupie, of sorts — I have the love of science but without the actual skill or experience to do anything about it. For that reason, I was a little worried that the jokes would be over my liberal arts head. After all, I didn’t even get the “Moments of Science” pun until I just wrote it in the previous paragraph. However, following my first Ig Nobel award show, I can enthusiastically state that the genius behind the event lies in its ability to appeal to anyone with an intrinsic curiosity about the world. I’m sure that some of the Nobel laureates in attendance caught a few things I missed, but I also think that some of them may have missed the humor of, for instance, a little girl simultaneously translating the show into Pig Latin.

Those who missed every joke (by not attending) needn’t fear. The show is available for download on the Ig Nobel site at www.improbable.com/ig/. Those of you who are oversees can catch the Ig Nobel 2006 Tour of the UK in March or the Tour of Australia in August.

So, the next time you read about the latest study on the brain activity of a locust watching the movie “Star Wars,” show a little respect. That could be an Ig Nobel winner.

Sagan, Diamond, Penn & Teller
and other DVDs at Shop Skeptic