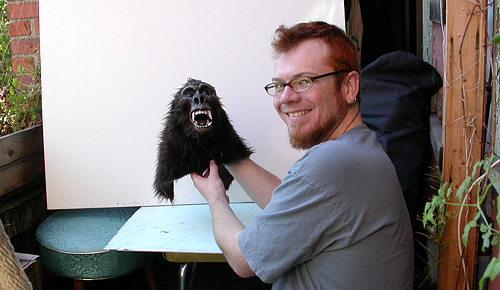 Daniel Loxton behind the scenes of a complex Junior Skeptic illustration, with his hand-made and painted Yeti head. 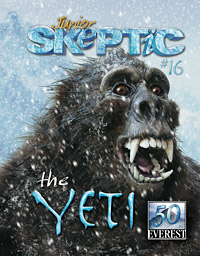 For the second half of yesterday’s Skepticality podcast, Fraser Cain interviews Daniel Loxton, the Editor of Skeptic magazine’s Junior Skeptic, on education, Pyramid Power, the Dover Decision, and other topics. Fraser is the publisher of Universe Today, a popular website dedicated to news about astronomy and space exploration. The episode also includes chat about The Amazing Meeting 4 and Skepchicks in fishnets.

LISTEN to this podcast >

William C. Waterhouse received a Ph.D. in mathematics at Harvard University. He has written more than 150 professional publications and has been a professor of mathematics at Penn State for 30 years. For a decade he has been an active participant in the alt.quotations Internet newsgroup. 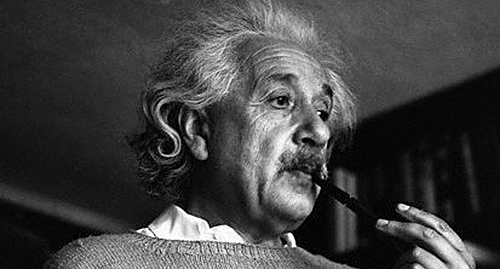 Did Einstein Praise the Church?
A statement attributed to Einstein
isn’t what it claims to be.

In 2005 we celebrate the centennial of Einstein’s greatest work, not just relativity but also his analysis of Brownian motion and the quantum explanation of the photoelectric effect. So it seems like a good time to settle another question about him: Did he lavishly praise the Church for its opposition to Nazism?

There is a widely reproduced statement, attributed to Einstein, in which he enthusiastically praises the Church. As far as I have been able to find, the first appearance of this statement was in Time Magazine, December 23, 1940 (page 38).1 “The best tribute to the spirit of Germany’s Christians comes from a Jew and an agnostic (Time, Sept. 23) — the world’s most famous scientist, Albert Einstein,” the article says. Einstein is then quoted as saying:

Being a lover of freedom, when the revolution came in Germany, I looked to the universities to defend it, knowing that they had always boasted of their devotion to the cause of truth; but, no, the universities immediately were silenced. Then I looked to the great editors of the newspapers whose flaming editorials in days gone by had proclaimed their love of freedom; but they, like the universities, were silenced in a few short weeks… Only the Church stood squarely across the path of Hitler’s campaign for suppressing truth. I never had any special interest in the Church before, but now I feel a great affection and admiration because the Church alone has had the courage and persistence to stand for intellectual truth and moral freedom. I am forced thus to confess that what I once despised I now praise unreservedly.

Time does not give any source or any indication that their reporter heard him say it. In January 1943, this exact same text was read aloud in a nationwide broadcast by Fulton J. Sheen (then a monsignor in the Catholic Church, later a bishop).2 Many copies of the same text can now be found in print and on the Internet.

Different writers, of course, have had different ideas of its meaning. Some (including Walter Niemöller) take it to refer to the “Confessing Church,” those German Protestant ministers who objected to Nazi supervision.3 Supporters of Pope Pius XII have used it to rebut attacks on his relation to the Holocaust, often modifying the language to say that Einstein specifically mentioned the Catholic Church.4 As early as 1943 one writer treated it as an anti-secular statement,5 and others, including the well-known theologian Thomas Torrance (former moderator of the Church of Scotland’s General Assembly), think it refers to Christianity in general.6

More strikingly, it seemed to me that there are serious reasons to doubt that Einstein ever said it. First, if (as the Catholics think) it refers to Pius XII, it would have to have been written after 1938. But the text certainly sounds as though it refers to a time shortly after the Nazis came to power.

Second, the language (“great editors,” “flaming editorials,” etc.) is much more flamboyant than Einstein’s usual style. Here, for comparison, is something he undoubtedly did write in 1933:

I hope that healthy conditions will soon supervene in Germany and that in future her great men like Kant and Goethe will not merely be commemorated from time to time but that the principles which they taught will also prevail in public life and in the general consciousness.7

As this shows, he (like most German Jews) hoped for support not from Christianity as such, but from the German Enlightenment tradition.

Third, it is hard to suppose that Einstein would deliberately publish a statement praising those who opposed “suppression of truth” without any mention of the vastly more important question of attacks on Jews.

And fourth, at least to another scientist like me, it seems unlikely that Einstein would have been guilty of saying that he had “despised” something immediately after saying that he “never had any special interest” in it.

Having a long-standing interest in verifying quotations, I turned to The Expanded Quotable Einstein,8 but it does not include this statement. So I wrote to its editor, Alice Calaprice. She was unsure about the statement but kindly referred me to Barbara Wolff at the Einstein Archives in Jerusalem. Ms. Wolff was able to answer my question: It turns out that the Einstein Archives contain an unpublished letter mentioning this topic specifically. Writing to Count Montgelas on March 28, 1947, Einstein explained that early in the Hitler years he had casually mentioned to some journalist that hardly any German intellectuals except a few churchmen were supporting individual rights and intellectual freedom. He added that this statement had subsequently been drastically exaggerated beyond anything that he could recognize as his own.9

As Ms. Wolf wrote to me, the supposed statement “is definitely better suited to serve the purpose of revealing how Einstein was (ab)used, than to present Einstein’s point of view.”10