In the weeks leading up to the Environmental Wars conference, we’ll be posting links to various topics of interest in this “Enviro-Buzz” section. The content in these links does not necessarily represent our position; we simply aim to host the full range of dialogue around the issues. This week, we link to Grist website’s response to the question “Why is the U.S. still debating global warming?”

Join us on the weekend of June 2–4 as we attempt to disentangle politics and opinion from the science about our planet’s health. Please note that Sunday’s optional geology tour is now sold out! Register soon, and participate in the dialogue: 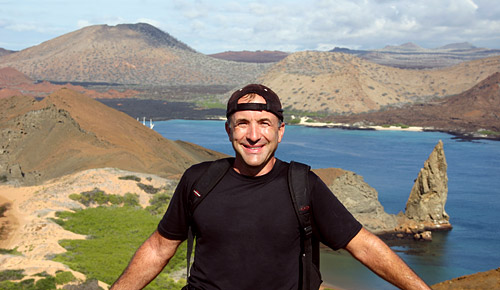 Michael Shermer at Pinnacle Rock on the tiny island of Bartolome off of Santiago near Sullivan Bay, where Darwin visited in 1835. This photo was taken during the 1st World Summit.

Physics Beyond the Standard Model

The Galapagos Institute for the Arts & Sciences presents its 2nd annual World Summit. Last year I attended the 1st World Summit at the Galapagos Islands on evolution. This year’s theme is “Physics Beyond the Standard Model.” They have a collection of the world’s outstanding physicists talking about the biggest problems in physics in one of the coolest places on Earth to go. The people who organize and host these events do a world-class job of organization, so check it out. — Michael Shermer

READ about last year’s World Summit in our eSkeptic archives >

READ about this year’s World Summit at their website >

In this week’s eSkeptic, Jeff Prewitt shares with us his report on the debate between William Dembski and Michael Shermer that took place on March 23rd at the Discovery Institute, University of Kentucky.

On Thursday, March 23, I had the pleasure of attending a formal debate between Dr. Michael Shermer of the Skeptics Society and Dr. William Dembski of the Discovery Institute on the campus of the University of Kentucky. It’s been two days, but the events are still quite vivid.

I traveled with my brother and a good friend, and, as expected, we had excellent, thought-provoking conversations on several topics spiritual and temporal. It was almost as though we were warming up our brains (so to speak) for the night’s event. We arrived an hour and a half early and, to my surprise, were the first ones there apart from the diligent sound crew. We took seats about five rows back in the center, and watched as people trickled in. I must note for those who haven’t seen it that Memorial Hall looks very much like a church. I felt the strangest urge to genuflect when I entered. It seemed altogether fitting and quite odd at the same time.

After several minutes, seats began filling. Though the hall wasn’t packed until a few minutes before the debate began, it was noticeably more populated at 30 minutes till. It was very interesting just listening to the conversations of the people around me while we waited for the night’s action. I’m sure there were many firm creationists that came to pull for Dembski, but everyone within earshot seemed to be of a more skeptical bend. Despite never having been in a congregation (!) of skeptics before, I quickly felt that these were my kind of people. I listened to men my father’s and grandfather’s age discussing the South Park episode of the night before (Chef’s Farewell — a hot topic!), a man presented another with a Flying Spaghetti Monster emblem, and there was talk of the JREF and the health of Mr. James Randi. Eventually, Dr. Shermer entered the room. He had come from a dinner with KASES members that I was unable to attend. A combination of backwardness and not wanting to disturb the man right before his debate kept me from approaching him, but just being in the same room was enough for me.

A few minutes after 8 local time, the debate began. Dr. Dembski showed examples of very complex systems found in nature (his favorite seemed to be bacterial flagella), and presented the case that evolution through natural selection could not account for the complexity of such systems. He also presented his belief that the statistical improbability of life as we know it happening by chance was so high that it seems unreasonable to believe that such life began by natural processes. Dembski was quite civil during his opening remarks. He even had a funny clip from Dumb and Dumber which related to his probability theme. His delivery was somewhat dry and he rarely cracked a smile (though he seemed a little under the weather — I can’t really judge since I’ve never watched him before), but on the whole he was worth listening to (much more so than, say, Kent Hovind).

Dr. Shermer was given 25 minutes to speak next, and I feel he made the very most of it. Shermer rebutted that complexity can come through natural selection, and presented examples of earlier forms of flagella that were steps up the evolutionary staircase to those mentioned by Dembski. He argued that we simply don’t know what the probabilities are in the formation of life, so any attempts to quantify the improbability of our being here are only guesswork. Shermer noted that many systems in the body show more evidence of a bottom-up tinkerer than a top-down designer. In other words, we seem like we came to our present form more from trial-and-error than from the necessarily perfect design of a perfect creator. Why do I have an appendix and nipples, when I don’t need either to function? 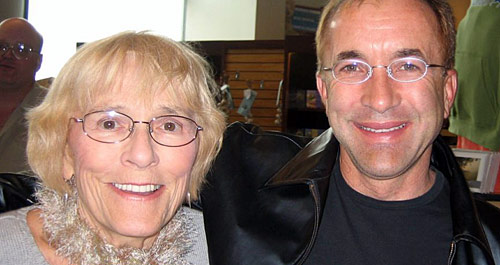 Shermer went on to say that being pro-evolution does not require you to be anti-religious. There are many scientists, Christian and otherwise, who see the overwhelming evidence for evolution and are honest enough to realize that it must take place. He said that science is not about miracles. We (science) don’t know yet how we got here on the cosmological scale, but as we learn how it could happen, we can test things in a lab. Saying “God did it,” though it may come from a strong belief, is not science. It can’t be tested unless He decides to show himself and submit to tests (sound of crickets chirping).

The homerun of the night, in my opinion, came when Dr. Shermer put up a quote by Isaac Newton. In that quote, Newton pointed out that the planets in our solar system lie roughly in a nice, level plane. This, he argued, was proof positive of design by a benevolent (and somewhat artistic) creator. Why don’t Intelligent Design proponents use this argument now? In the centuries since Newton said this, science has shown that this is completely a natural phenomenon. No one, not even IDers will argue that point. Because we didn’t know how it was done, we attributed it to God. The more we learn happens naturally, the less there is for God to do. Our species has gone from our cave-dwelling ancestors attributing everything to a Deity to now, only putting Him in charge of a few, ever-decreasing number of things. What do we think of now as so impossible it must have been done by God? By Dembski’s own words, he feels that evolution is one such thing.

In the question and answer session that followed, I was surprised by the fact that every question asked seemed to come from the skeptic side. I had fully expected the churches to mobilize against the “Darwinists” and to quote scripture to Shermer. This was absolutely not the case. Dembski was called upon to defend his work. Was it peer-reviewed? What theories have Intelligent Design contributed to science? Did he support the “Wedge Document” that the Discovery Institute formulated as their plan to bring religion back to education?

Finally, it was time for closing remarks. Here, Dembski took a cheap shot that seemed somewhat unbecoming of him. He took issue with Shermer’s remarks that a Christian can believe in evolution, and that it doesn’t require losing your faith to accept the theory. He said that Shermer did not, in fact, remain an evangelical Christian — seeming to suggest that evolution was the sole cause of this. Unfortunately, that remark was probably enough to stop some honest, open-minded religious type from searching out the truth for him/herself. There’s nothing like the fear of eternal damnation to stop someone from thinking for themselves and resume following the clergy blindly.

The point of it all for me, is that science takes what we see and makes conclusions and finds answers (more like tentative solutions) based on the evidence. ID starts with the answer that they want, and tries to make the evidence fit that answer. That is simply not science.