In this week’s Enviro-Buzz we link to an article in the June issue of Scientific American called The Flipping Point, in which Michael Shermer shares with us “how the evidence for anthropogenic global warming has converged to cause this environmental skeptic to make a cognitive flip.”

Join us on the weekend of June 2–4 as we continue to disentangle politics and opinion from the science about our planet’s health. Please note that Sunday’s optional geology tour is now sold out! Register soon, and participate in the dialogue: 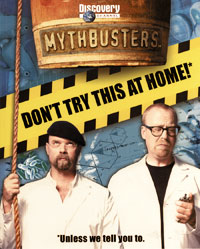 Don’t Try This at Home

Adam and Jamie take on 15 claims from their hit Discovery Channel TV show and demonstrate the process they go through which teaches kids how to evaluate and test claims. It’s enriched with fascinating sidebars including science facts and experiments that can be done with simple household items.

In this week’s eSkeptic, Dr. Lawrence Norton reviews a recent Time magazine article that touted the virtues of Facilitated Communication. In his critique, Dr. Norton cites several scientific experiments that have clearly demonstrated that facilitated communication is an illusion, and he reminds us of “the significant costs that are often incurred when we, as a society, uncritically accept what we want to believe to be true based on emotion, rather than accepting what is based on fact.”

Dr. Lawrence Norton is a school psychologist and adjunct instructor of psychology for the University of Alaska. He is currently at work on his first book, which examines the efficacy of educational interventions and therapies, tentatively titled, A Skeptic in the Classroom. 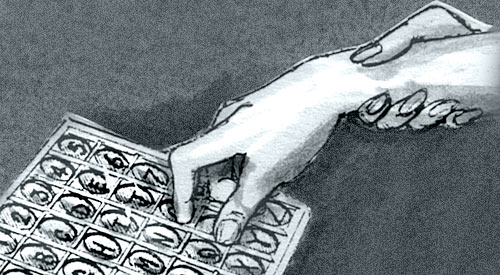 The cover article of Time magazine dated May 15, 2006 was entitled, “New Insights Into the Hidden World of Autism.” The article began with the story of a 13-year old profoundly autistic girl whose language was “limited to snatches of songs, echoed dialogue, and unintelligible utterances” and who was “most likely retarded.” However, a few days before her 13th birthday, Hannah was introduced to a communication technique known as facilitated communication. This is technique whereby a “facilitator” helps stabilize an autistic person’s hand and arm so that they are able to type a message on a keyboard. On that day, the girl was asked by the facilitator, “Is there anything you’d like to say, Hannah?” Hannah, with the assistance of the facilitator, then typed out, “I love Mom.” A year and a half later, Hannah is working her way through high school biology, algebra, and ancient history.1

If you are skeptical of this claim, you have good reason to be. Facilitated communication is a technique originally developed in Australia to assist individuals with physical limitations such as cerebral palsy to communicate via a keyboard. The technique was introduced in the United States in 1990 by Dr. Douglas Bicklen, a professor of special education at Syracuse University. While facilitated communication was never intended for use with autistic children, Bicklen believed it had the potential to provide a means of expressive communication for uncommunicative autistic individuals. Bicklen believed that while autistic children understood language, they were unable to express their thoughts due to a type of developmental apraxia that impaired their ability to control voluntary movement. It was their inability to express themselves, according to Biklen, which often masked the autistic individuals’ true cognitive and linguistic abilities.2

Like 13-year old Hannah, parents of autistic children in the early 1990s found that when assisted by a facilitator their autistic children demonstrated extraordinary abilities. Five and six year old autistic children were writing complete sentences. Others wrote poems and short stories, while autistic adolescents successfully completed high school and college courses despite never having been taught to read or write or having demonstrated such abilities.3

Public schools around the country spent millions of dollars to hire and train facilitators. Parents made plans to have their child’s facilitator accompany them to college. Parents, teachers and therapists did not question the validity of the facilitated communications. They believed facilitated communication was a breakthrough technique that completely redefined autism. The messages their autistic children typed, such as Hannah’s “I love mom,” was all the validation many parents would ever need.

However, some began to doubt the validity of the facilitated communications and began to ask difficult questions. Why would a child be able to successfully communicate with the assistance of a facilitator at school, but not at home with his or her own parents? How could a child demonstrate extraordinary literacy, writing grammatically correct sentences, when they had never been taught to read or write? How could a child type a message on a keyboard while they were staring at the ceiling? And most importantly, were the facilitated communications real? Were the autistic children authoring these writings, or were the facilitators?

The question of whether the facilitated communications were real took on increased urgency when accusations of child sexual abuse began to surface around the country. As a result of these accusations, autistic children were removed from their homes by child welfare agencies while their parents were charged with child sexual abuse.

In a well-controlled 1996 study, for example, the efficacy of facilitated communication was assessed in 12 individuals ranging in age from 7–36. Six of the participants had a diagnosis of autism, while six had severe to profound cognitive impairments. All subjects had demonstrated unexpected literacy once they began using facilitated communication. The facilitators in this study were those who had demonstrated the most success with each subject. Four of the facilitators were the subject’s mothers, two were special education teachers, two were resident assistants, and one a teacher’s aide. The amount of time each facilitator had been facilitating with each subject ranged from six months to two years.

The subjects were assessed in a familiar environment. The subjects or their facilitator were allowed to stop at any point if they felt uncomfortable. The subjects were presented with either an auditory or visual stimulus, and were then asked to identify that same stimulus. When the facilitators were unable to see or hear what the subjects saw or heard, the autistic subjects’ unexpected literacy via facilitated communication was no longer evident.4

In a 1993 study with 21 elementary and secondary autistic students, the researchers found no support for facilitated communication and concluded that “no client showed unexpected literacy or communicative abilities when tested via the facilitator screening procedure, even after 20 hours of training.”6

A 1994 study examined the facilitated communications of 19 developmentally disabled adults ranging in age from 23–50. All the subjects in the study had been successfully using facilitated communication in their day treatment facility. The study required the individual via their facilitator to identify the color, shape, and the number of shapes they saw on a card. When the facilitator did not see the same card shown to the subject, no subject was found to perform at levels that exceeded chance.7

In a 1996 study of 14 students with autism, none of the students were able to produce functional, typed communication following 10 weeks of instruction in the use of facilitated communication.8

These studies, along with many others, failed to validate the claims of facilitated communication advocates.9 The empirical data was clear. It was not the autistic children who were authoring the typed messages, but their facilitators. The results of the scientific studies prompted the American Psychological Association in 1994 to adopt a resolution that stated, in part, that “facilitated communication is a controversial and unproved communication procedure with no scientifically demonstrated support for its efficacy.”

Parents, their relatives and friends, teachers and therapists had all had wanted to believe that the facilitated communications were real. Any caring, empathetic person would want them to be real. Unfortunately, the scientific results were unequivocal.

What were the costs of uncritically accepting these facilitated messages? False accusations of sexual abuse were made, parents were investigated for child sexual abuse (some were even jailed), children were placed in long term foster care, families were torn apart, millions of public school dollars were spent to hire and train facilitators, and years of schooling were wasted as autistic children sat in advanced classes rather than learning the life skills they would need. 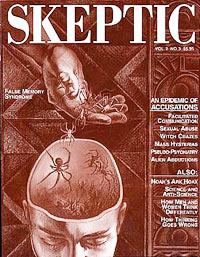 In Skeptic magazine Vol. 2, No. 3, we printed an article by the Director of Research, New England Center for Autism, Dr. Gina Green, called Facilitated Communication: Mental Miracle or Sleight of Hand?. Dr. Green shows that it is nothing more than a cruel self-deception on the part of caring therapists. Also, Dr. Green’s lecture at Caltech is available on tape or VHS formats at Shop Skeptic.

ORDER the Skeptic back issue >