Getting to the Conference

Detailed information regarding accommodation and shuttle service from the airport to the Westin Hotel are available on the Environmental Wars website.

GET accommodation and shuttle info >

For those of you who are renting a car at the airport we’ve provided direct links to Google Maps with directions from the Los Angeles International Airport (LAX) to Caltech as well as to the Weston Hotel. If you are starting your journey from a location other than the airport, you may enter that location in the “start address” field above the Google map.

Parking near the Beckman Auditorium

Join us this weekend, and participate in the dialogue: 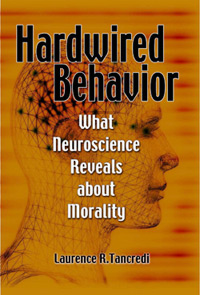 Kenneth W. Krause lives in Wisconsin, along the Mississippi River. He is a former prosecutor and criminal defense attorney with degrees in law, history, literature, and fine art. Books editor for Secular Nation, Kenneth has recently contributed as well to Free Inquiry, Skeptic, The Humanist, and Freethought Today.

Nature precedes nurture. Biology sets the parameters for behavior, whether consciously or unconsciously inspired. “Free will” is more a convenient social and political ideal than a dispassionate description of reality, and as such, writes Laurence Tancredi, attorney and New York University Professor of Psychiatry, “individual ‘sins’ may not be ‘sins’ after all” (p. 9).

Moral behaviors draw from nearly every component of the brain, but the “heavy lifting” is performed in three areas: the amygdala, the inhibitory networks (anterior cingulate cortex, hippocampus, hypothalamus, and prefrontal cortex), and the mirror-neuron system. Broadly stated, the amygdala generates emotional import from environmental stimuli while inhibitory structures assist in regulating emotional responses. The prefrontal cortex, often referred to as the brain’s “command post,” is crucial in managing complex behaviors, and the mirror-neuron system is essential to learning by imitation. Overwhelmingly intense responses by the first or deficiencies in or injuries to the latter structures can result in bad decisions, and, ultimately, immoral behavior.

Even so, genes do not lord over every detail of human conduct. Biology is more a firm hand clasped behind a heavy leash than ten tireless fingers strung over a marionette. Genetic transmission of any given moral capacity is insufficient to ensure a moral trait. In addition, some instruction, or external intercession, must trigger such behaviors.

Aggressive moral training, Tancredi advises, must be implemented “early and often” (43). Deception, for example, appears to come quite naturally for children, even for those too young to anticipate punishment. According to one study, at least sixty percent of people lie regularly, and many such inquiries confirm that males perjure themselves two or three times more often than females. In evolutionary terms, men tend to lie as a means of self-promotion and women for the sake of self-protection.

Contrary to popular information, such deeds are common among other intelligent mammals as well. Dogs simulate injury to secure nourishment; chimpanzees have been known to feign indifference before spitting water at unsuspecting passers by. Evidently, several species acquired the trait of ruse as both an effective instrument of self-preservation and an opportune means of entertainment.

Similarly, the “evidence is strong that people do not choose their sexual interests” (108). Homosexuality, also practiced by numerous species, including monkeys, bonobos, chimpanzees, dolphins, and birds, might be heritable in part through mothers. Also, anomalies resulting in prenatal testosterone deficiencies appear to increase the chance of homosexuality among males. Like women, homosexuals tend to have larger anterior commissures than men, and generally exhibit better verbal than spatial capacities.

According to offender reports, pedophilia might develop prior to puberty, before subjects experience sex of any kind. The evidence indicates that sexual deviance might be caused by monoaminergic dysregulation, a type of neurotransmitter imbalance. According to the author, if the neurochemicals of lust, testosterone-induced dopamine and norepinephrine, reach excessive levels, “they will dampen the circulating levels of the neurochemicals of social bonding,” oxytocin and vasopressin (112).

Scientists have long known that injuries to the brain’s prefrontal regions often result in moral challenges, including impulsivity, immature behavior, aggression, and the inability to modify personal behavior. Researchers have discovered as well that alleged murderers with somewhat standard family backgrounds demonstrate lower prefrontal glucose metabolism when compared to those with histories of social and psychological deprivation and to the control group.

“This would suggest,” Tancredi argues, “that murderers are strongly affected by prefrontal deficits even without the ‘social push’ from environment” (153). The author stops short, however, of professing that criminals are never morally responsible for their actions. Rather, he writes, “those who have full control are likely to represent a very small percentage of those we now label as bad,” and “the relationship between ‘mad’ and ‘bad’ is growing ever closer” (143, 160).

Thus, Tancredi alleges, the M’Naughten standard and other modern legal insanity tests are deficient, at least insofar as they consider only a defendant’s ability to distinguish or appreciate the difference between society’s definitions of right and wrong but not a defendant’s ability to control his or her behavior, or, in other words, to exercise free will. The same reasoning should apply, the author reasons, when individuals judge other individuals’ “badness.”

To illustrate his point, Tancredi exploits his involvement in the former criminal case against Ricky Green, a psychopathic serial killer who sexually mutilated his victims. Green was physically abused by his father, sexually abused by his grandfather and dominated by both male and female sexual partners during his childhood and adolescence. His sister seduced him and his father and brothers were criminals. One could hardly imagine a more unfortunate and potentially volatile familial environment.

Nevertheless, Tancredi writes, the genesis of Green’s murderous rage was an amalgamation of both nurture and nature. His ability to manage his emotions and conform his behavior to socially acceptable paradigms “was challenged from birth” (62). Subjective reports indicated that Green’s limbic structures and anterior cingulated cortex were incapable of inhibiting his amygdalar responses to external stimuli. In addition, his brain might have been altered by the “severe frustration and stress” he must have experienced as a powerless child. (63) These changes, Tancredi claims, can result in further degradation of a person’s anxiety threshold.

A moderately intriguing journey for non-scientists, Hardwired Behavior is an effortless read to the end, but it ultimately fails to provide an appreciable destination. Too frequently, Tancredi dwells on gravel and blacktop as if he believes his readers were traversing it for the very first time. Occasionally, he directs our attention out the window and into the clouds — speculating wildly — promising more than anyone could possibly deliver.

But neither limited free will, nor significantly determined morality, should imply any degree of intellectual resignation. Prior to the 1980s, most neuroscientists were convinced that only fetal and juvenile brains could generate new neurons. Subsequent experiments with canaries, rats, primates, and humans, however, have deposed such assumptions. According to contemporary leading neuroscientists, neuroplasticity and neurogenesis in adult animals have proven the most important and exciting brain science discoveries to occur in the last quarter century.

Now, such experts are contemplating the next 25 years, hoping that such discoveries will result in our ability to rewire or transplant subjects’ existing neural circuits. These scientists, including Tancredi, recognize the serious ethical implications of this science. Ethical quandaries, however, have always been the hallmark of cutting-edge science.

On February 27th, at the University of Alabama, Michael Shermer defended evolution in a debate against Paul Nelson — one of the world’s most noted proponents of intelligent design and a senior fellow with Discovery Institute’s Center for Science and Culture. For your listening pleasure, we have made available an audio recording of this debate in mp3 format. Please note that the first 2 minutes and 48 seconds of this recording has technical problems with volume and clarity, but the rest is fine.