Richard Wiseman, one of the lectures at Caltech featured in the recent additions to Shop Skeptic

John C. Snider is the editor of the online science fiction magazine scifidimensions. 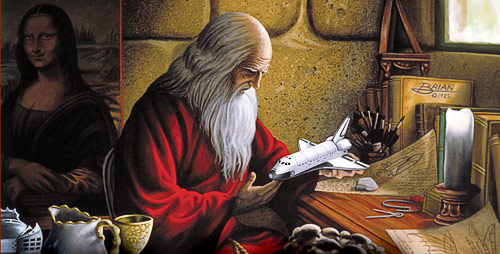 It has been nearly four centuries since Galileo Galilei lost his legendary showdown with the Catholic Church’s Court of the Inquisition. Threatened with imprisonment, torture and certain death, Galileo backed down — officially, at least — from his outrageous claim that the earth and the planets orbited the sun (a claim which he had the audacity to support with — gasp! — data, meticulously gathered and brilliantly analyzed).

Since Galileo’s time, science has marched messily forward and superstition has been forced to retreat; although lately superstition has engaged in some clever stalling tactics. The ancient Catholic Church could enforce its will through military force and terror; in 21st century America, the more loosely organized Protestants simply outmaneuver scientists by dominating school boards and swarming the halls of Congress. Evangelical hegemony has replaced outright theocracy.

While nobody fights about the structure of the solar system anymore, the current front in the Science-Superstition Wars is in the realm of biology; specifically, Darwin’s theory of evolution. Nearly 150 years and several monkey trials later, religionists in the United States still refuse to surrender the field to the purveyors of evolution. Creationism has been soundly defeated, but its adherents have recently transmogrified it into “Intelligent Design” — and readers of this magazine know the rest.

So what better time for science fiction to step into the fray? Pyr, the new science fiction and fantasy imprint of Prometheus Books, has just published Galileo’s Children: Tales of Science vs. Superstition. This retrospective, pulled together by acclaimed editor Gardner Dozois (who helmed Asimov’s Science Fiction magazine for nearly 20 years), provides a taste of how the genre has reflected the perennial clash between the worlds of science and religion. Galileo’s Children contains a baker’s dozen of short stories by many of the greatest names ever to write science fiction.

Now, it would be incredibly boring if all the stories were mere parables of ignorant or corrupt church leaders persecuting saintly researchers in lab smocks — but this anthology casts a wider and generally subtler net.

Several entries, while perfectly enjoyable, can’t resist this predictable stereotype. In “The Stars Below” by Ursula K. Le Guin, a Galileo-esque astronomer is burned out of his home by a superstitious mob and forced to flee to a nearby silver mine. A citizen of a post-apocalyptic New Orleans begins to suspect forgotten truths about the earth in Edgar Pangborn’s “The World Is a Sphere.” Another Louisiana-based tale, “The Last Homosexual” by Paul Park, envisions a state where genetic presuppositions are used to root out unwanted minorities, and Brendan DuBois’s “Falling Star” (published only last year) sees a geriatric astronaut booted out of his small-town, small-minded community.

Mike Resnick, on the other hand, almost makes us feel sorry for displaced shamans. “When the Old Gods Die” follows the decline of a respected elder who lives in a far-future Utopia trying to recapture the idyllic peace of pre-colonial Kenya. He fears — and rightly so — that the inevitable encroachment of technology will have a corrosive effect on his naïve constituents.

Other stories see faith in crisis with itself. Arthur C. Clarke’s all-time classic “The Star” (originally published in 1955), describes a priest’s anguish when he realizes the supernova that created the Star of Bethlehem also destroyed a highly advanced and enviably gifted civilization. George R. R. Martin, who’s been wowing the fantasy world lately with his A Song of Ice and Fire novels, offers up “The Way of Cross and Dragon.” A thousand years in the future, a human Inquisitor is sent by his alien archbishop to investigate a heresy that has elevated Judas Iscariot to sainthood. The notion of an alien archbishop is intriguing in and of itself, but Martin strikes out in a different direction, positing a hidden organization that manipulates philosophical/religious paradigms.

It’s also possible that knowledge can be misunderstood, thus leading to more ignorance. In Robert Silverberg’s “The Pope of the Chimps,” researchers teaching sign-language to a colony of chimpanzees inadvertently pass along notions of God and the afterlife. And in James Tiptree, Jr.’s poignant “The Man Who Walked Home,” a bizarre time-travel experiment creates its own folklore and — eventually — its own superstitions.

Often we can learn more by looking back at possible pasts rather than peering forward into possible futures. Keith Roberts’s “The Will of God” wonders if inventions like the telegraph, the phonograph and the telephone might have been created under different circumstances — hindered all the way by narrow-minded mysticisms, of course.

Perhaps the strongest tales are those involving technologies that are cutting-edge by today’s standards. Chris Lawson’s “Written in Blood” puts a human face on Islam and postulates a genetic procedure in which the whole of the Koran can be encoded in an supplicant’s bloodstream. (One need only look around at the ubiquity of tattoos and body piercings in the present to guess what the adventurous of the future might do with their DNA.)

One of the best overall entries in the anthology is James Alan Gardner’s “Three Hearings on the Existence of Snakes in the Human Bloodstream.” Not to spoil it for the uninitiated, but it’s more or less a fable about the Protestant/Catholic schism, only this time the divide occurs over misinterpretation of a medical discovery, which over time becomes a tragically self-fulfilling prophecy. Another strong entry is Greg Egan’s “Oracle.” Set in an alternative-reality Britain, a gay researcher — assisted by a time-traveling android — takes on both MI6 and a pious fellow professor (who bears a passing resemblance to C.S. Lewis) to see just where the bounds of human reason might lay.

Fans looking for Arthur C. Clarke’s all-time classic “The Nine Billion Names of God” will be disappointed. In fairness, it has been reprinted and reprinted ad infinitum; besides, Clarke’s “The Star” is fitting enough.

Galileo’s Children isn’t the best science fiction anthology ever produced, but it’s quite good given its self-imposed restrictions. Skeptics and freethinkers will find something new and stimulating by reading it, and they’ll derive hope that America’s current socio-political climate is a mere pause before the cause of human progress surges forward, front-and-center once again.

How well does the media present science? Is there too much emphasis on the paranormal? These and other questions will be explored at the National Convention by outstanding presenters. Speakers will include scientists, science journalists and some well-known media personalities. The Melbourne Museum is sponsoring the convention and has provided the superb The Age Theatre for the venue. For more information: