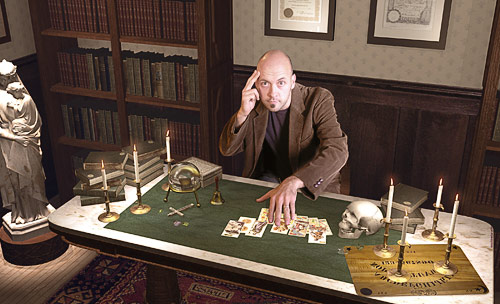 In this week’s eSkeptic we have a little fun with the theme of psychics and the paranormal. Here, we link to an article by Amanda Mitchell on NUVO.net (an independent, weekly newspaper highlighting arts, entertainment and social justice). Find out if you’re cursed, learn how to get the best deal on a reading and hear a skeptic’s viewpoint on this “world of wisdom” as Michael Shermer recounts his experience with James Van Praagh as well as pretending to be a psychic for a day.

Séance for Skeptics
How to Talk to the Dead

Since the earliest days of the Skeptics Society my friend and colleague Mark Edward has been consulting us on how to explain psychics and mediums to the media and public. Mark should know; although he is not a psychic, he plays one on TV, and at the Magic Castle in Hollywood, and even at Caltech for the Skeptics Society. It was Mark who first explained to me the methods of cold reading employed by psychics and mediums, and he was our resident psychic for the Fox Family Channel television series, Exploring the Unknown, on which he appeared several times, including conducting a séance (which he also once did at Caltech, on the occasion of the anniversary of Houdini’s death, in which the great magician appeared to make an appearance at that august institute of science). Now Mark is making available to non-magicians his book Sense and Séance, which I highly recommend. The information on the book follows… —Michael Shermer 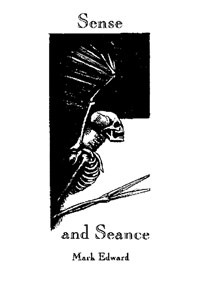 “A masterpiece … a collector’s item.”
— www.themagiccafe.com

What are the carefully hidden secrets of today’s psychics and mediums? If you have ever wanted to conduct a séance for fun or profit, now you can tap into little known methods from the past as well as access three fully-scripted portable séance productions from a book designed to teach anyone how to speak to the dead—or at least pretend to.

Sense and Séance is a signed and numbered hardbound limited edition of 500 copies that has received rave reviews from working magicians and mentalists around the world.

For full details on ordering this and other books and CDs on magic and mentalism, visit: www.themarkedward.com 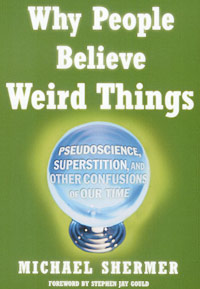 Here is a link to a recent review of Michael Shermer’s book Why People Believe Weird Things. The article, entitled Field Trips: Engaging a skeptic who considers me strange was written by Laura Marble and appeared on explorernews.com on July 5th, 2006.

The article is a well-written essay about a blogger’s first encounter with “skepticism,” in the form of my book Why People Believe Weird Things, and her reconfiguration of what it means to be skeptical — thoughtful inquiry, not dogmatic denial. Far too many people still equate skepticism with cynicism or mean-spirited disbelief, or skepticism for its own sake, which is certainly not how it is used in science. In science, skepticism is more of a verb than a noun, it is an approach to claims, not a position one holds. One can be skeptical of a claim, or skeptical of the skeptics of a claim. For example, I am skeptical of the Holocaust skeptics, the HIV-AIDS skeptics, the 9/11 skeptics, and the global warming skeptics; I suppose that makes me a “believer” in these claims, but “belief” is not a good word to employ when doing science. Scientists do not “believe” in facts of nature and history; these facts just are. We no more “believe in evolution” than we “believe in gravity.” Evolution and gravity simply are facts of nature. They exist whether we believe in them or not. —Michael Shermer