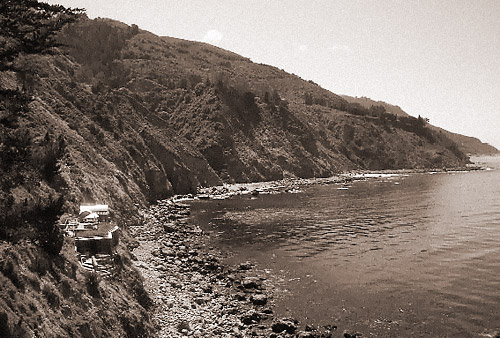 Science, Spirituality & the Search for Meaning
a weekend seminar led by Michael Shermer

August 11th–13th, 2006
at the Esalen Institute
Big Sur, California,
on the Pacific Ocean

There are just 10 more openings for the seminar on Science & Spirituality being taught by Dr. Michael Shermer of the Skeptics Society over the weekend of August 11–13, starting Friday night and ending Sunday morning. This is a unique seminar that combines classroom lectures and discussions, all at one of the most magnificent settings on the planet — a resort located on the cliffs of the Pacific Ocean just south of Big Sur on the Pacific Coast Highway. The price of the seminar ($655) includes lodging and meals, which is an incredible bargain when you consider that the two resorts just up the highway, Post Ranch Inn and Ventana Inn, charge that much for a single room night without meals or seminar! And the views are better at Esalen. As a bonus, Dr. Shermer is including complimentary copies of several of his books that accompany his lectures.

Each of the five 2-hour sessions will consist of a 90-minute lecture followed by 30 minutes of Q & A and audience discussion. Please note that there is plenty of “down time” between sessions for additional discussions over meals.

about the Esalen Institute

Esalen is, geographically speaking, a literal cliff, hanging precariously over the Pacific Ocean. The Esselen Indians used the hot mineral springs here as healing baths for centuries before European settlers arrived. Today the place is adorned with a host of lush organic gardens, mountain streams, a cliff-side swimming pool, hot springs embedded in a multimillion-dollar stone, cement, and steel spa, and meditation huts tucked away in the trees. Esalen was founded in 1962 by Stanford graduates Michael Murphy and Richard Price and has featured such notable visitors as Richard Feynman, Abraham Maslow, Timothy Leary, Paul Tillich, Carlos Castaneda, and B. F. Skinner. Regardless of your source of spirituality (science, religion, or self), Esalen embodies the integration of body, mind, and spirit.

READ more about the seminar and REGISTER > 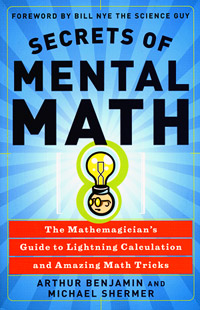 This book was formerly titled Mathemagics: How to Look Like a Genius Without Really Trying

Secrets of Mental Math: The Mathemagician’s Guide to Lightning Calculation and Amazing Math Tricks, by Arthur Benjamin and Michael Shermer (Foreword by Bill Nye the Science Guy), will have you thinking like a math genius in no time. Get ready to amaze your friends — and yourself — with incredible calculations you never thought you could master, as renowned “mathemagician” Arthur Benjamin shares his techniques for lightning-quick calculations and amazing number tricks. This book will teach you to do math in your head faster than you ever thought possible, dramatically improve your memory for numbers, and — maybe for the first time — make mathematics fun.

“A great introduction to the wonder of numbers, from two superb teachers.”

“A magical mystery tour of mental mathematics! Fascinating and fun.”

— Joseph Gallian, President of the Mathematical Association of America

“The clearest, simplest, most entertaining, and best book yet on the art of calculating in your head.”

“This book can teach you mental math skills that will surprise you and your friends. Better, you will have fun and have valuable practical tools inside your head.”

— Dr. Edward O. Thorp, mathematician and author of Beat the Dealer and Beat the Market

Dr. ARTHUR BENJAMIN is a Professor of Mathematics at Harvey Mudd College in Claremont, California, having received his Ph.D. in Mathematical Sciences from Johns Hopkins University in 1989. In 2000, the Mathematical Association of America awarded him the Haimo Prize for Distinguished College Teaching. Arthur Benjamin is also a professional magician, and frequently performs at the Magic Castle in Hollywood. He has demonstrated and explained his calculating talents to audiences all over the world. In 2005, Reader’s Digest called him “America’s Best Math Whiz.”

Dr. MICHAEL SHERMER is a monthly columnist for Scientific American, the Publisher of Skeptic magazine, and the host of the Caltech public science lecture series. He is the author of Why People Believe Weird Things, How We Believe, The Science of Good and Evil, The Borderlands of Science, and Science Friction.

As many of you know, I once debated Young-Earth Creationist Kent Hovind (see my article, “Then a Miracle Occurs: An Obstreperous Evening with the Insouciant Kent Hovind, Young Earth Creationist and Defender of the Faith” (originally published in the Reports of the National Center for Science Education and archived in eSkeptic for Monday, May 10th, 2004), whom I called “the fastest talker I have ever met, with a voice like Ross Perot and a finish to each sentence that bespoke ‘so there!’”

Well, according to the Pensacola News Journal, Hovind (also known as Dr. Dino, who built his Dinosaur Adventure Land in Pensacola), has been arrested on charges related to tax evasion. The God of Heaven may be omnipotent in his dealings with sin in the next life, but the God of the Government prefers to handle sinful matters in this life.

This also means that Hovind is not likely to be paying the $250,000 he owes Adam Kisby, for meeting Dr. Dino’s challenge to “prove beyond reasonable doubt that the process of evolution is the only possible way the observed phenomena could have come into existence.” Kisby met Hovind’s challenge in Skeptic, Vol. 12, No. 1, although admittedly Kisby didn’t exactly expect Hovind to accept his proof. —Michael Shermer