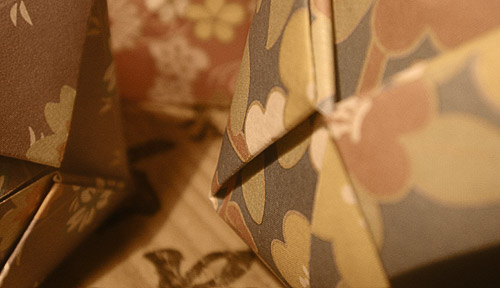 The Fourth International Conference on Origami
in Science, Mathematics, and Education (4OSME)

4OSME is the 4th interdisciplinary conference that has brought together artists, scientists, technologists and educators to explore the relationships between origami (the Japanese art of paperfolding), mathematics and science. Although not a likely combination, to be sure — surprisingly, origami is deeply connected to many fields of mathematics and has made contributions to practical scientific problems ranging from the design of airbags to medical implants and unfolding structures in space! For more information:

In this week’s eSkeptic Alison Smith, the founder of Skeptical Analysis of the Paranormal Society (SAPS), an investigative team devoted to re-creating and debunking popular paranormal video footage shown on television, debunks “Ghost Hunters” — a Sci-Fi Network TV show by one of the most famous paranormal investigation groups in the world (TAPS — The Atlantic Paranormal Society). Smith is a licensed private investigator, armed security officer, and is also a psychology major at the University of Texas at Arlington.

The Atlantic Paranormal Society (TAPS) is one of the most famous paranormal investigation groups in the world according to their web site, with over 50,000 hits to the site per day. Their fame comes from being able to deliver, on a regular basis, enough paranormal evidence to catch the attention of the Sci-Fi Network which led to their own TV show — “Ghost Hunters”. The hour long show takes you inside various supposedly haunted places, led by founders Jason Hawes and Grant Wilson, along with a troupe of lesser known TAPS members that includes two demonologists and one Wiccan, amongst others. TAPS claims to have a scientific approach to investigation, using gadgets like EMF Detectors, Flir cameras, and handheld digital thermometers to either prove or disprove a haunting. Founder Jason Hawes has said in various interviews that when TAPS is called to investigate paranormal claims, they go in attempting to debunk the haunting. The public’s trust was gained through the number of “true hauntings” TAPS uncovered. The percentage was shockingly small considering more popularity could be attained with more hauntings. In the first season, only 25% of all investigated locations were deemed “haunted”. The numbers went up, however, in the second season when 51.22% of the locations were haunted.

The show “Ghost Hunters” came to my attention when I stumbled upon their web site and watched a full episode posted there, available for viewing. I was impressed with their lack of paranormal evidence, and purchased Season One on DVD. Episode 104 featured an investigation of Race Rock Lighthouse. During a review of their investigation, they discovered that a folding travel chair that had been left in an empty room moved, apparently on its own. I immediately grew wise in the ways of TAPS. Earlier, in the context of the show, Lead Investigator Grant Wilson, who had been sitting in the chair had gotten up, taken it with him, and left the room closing the door behind him. This did not fit with their findings, which showed the chair in an empty room with the door to the room open. I wondered why this inconsistency existed, and decided to attempt a re-creation of a chair moving of its own accord. I tried a variety of methods, finally settling on black thread to move the chair. Because of this re-creation, Skeptical Analysis of the Paranormal Society (SAPS) was formed.

In creating the footage for this site, I discovered many other people who were skeptical of the TAPS footage and had attempted re-creations as well. One of these was for Episode 105: Eastern State Penitentiary. During this episode, a camera that no one was anywhere near picked up an image of a cloaked figure that seemingly appeared out of nowhere and ran down the catwalk the camera was pointed at. This piece of footage has been debated hotly on the TAPS official message board.

The footage is debated with such passion because, in attempting a re-creation, it was discovered that the effect that made it appear as though the cloaked figure materialized out of nowhere could only be created by altering the footage to 15 frames per second instead of the usual 30 frames per second TAPS records at. This would mean that the only people who had access to altering the footage were the TAPS crew themselves, as they are the ones who do the “reveal” at the end of each episode, where they share their findings with the owners of the location.

VIEW the entire debunk for episode 105 >

In Season One of “Ghost Hunters” TAPS used DVR cameras, IR cameras, EMF Detectors, Digital Thermometers, Digital Cameras, and Digital Voice Recorders in their attempts to debunk haunted locations. As the success of the show grew, Season Two brought in the Flir thermal camera. In Episode 223: Ghostly Soldier, a Flir camera captured an image of a person projected on a locker with a number “2” printed on it. TAPS was convinced that this was evidence of a deceased soldier’s spirit, who was said to haunt the location. However, analysis by a third party investigator revealed that, in fact, the image was more likely a reflection off the locker from Lead Investigator Grant Wilson. The apparition even appears to be looking down at something in its hand — the screen of the Flir camera as Grant held it.

TAPS maintains that they do not charge for their investigations and are only interested in researching the paranormal, not making money off of it. Evidence of this could be seen in the first season when, while not involved in investigations, Grant and Jason worked as plumbers for Roto-Rooter. This has led many fans to believe that TAPS is a charitable organization, and that they also do not receive income for their appearances on “Ghost Hunters”. However, in the second season of the show, Roto-Rooter was put on the back burner in favor of working in the majority for TAPS. Questions put to Jason Hawes through e-mail about his salary for “Ghost Hunters” were unanswered. TAPS also has a button on their main page where you can offer donations, and another link for purchasing “Official TAPS Gear” which will soon be available in department stores across the U.S.

The TAPS 18+ Message Board, home to nearly 4,000 members, is a favorite of fans for discussion of episodes, anecdotes about personal hauntings, and investigation techniques for the up-and-coming paranormal investigator. Members who have repeatedly posted skeptical evidence, or links to the above re-creations have been banned from use of the boards without explanation. I was one of these people, but I was far less likely to let it go. After repeated attempts to contact the forum’s technical administrator, I was informed that my ban was without any particular reason, and that the order to ban had come from Jason Hawes himself, who said simply that I would know the reason for the ban. The only reason I could fathom, having never broken any of the rules stated in the board’s TOS, was posting skeptical analyses of the TAPS footage. Third party review of evidence collected by TAPS is not encouraged, and members who have contacted the group asking for full footage from everything recorded at the haunted locations have also gone unanswered.

SAPS formed to balance the type of information that the public receives about paranormal investigations. While our intention is not to disprove that there are unexplainable phenomena, we hope to show how easy it is to duplicate the footage that TAPS uses as proof, and explain the psychological reasons that people are so eager to believe. One of the things we are most interested in concerning “Ghost Hunters” is not only the actual evidence presented, but the way that it is presented and the choice of words the TAPS members use when presenting it. The conversations bear striking resemblance to False Memory Implantation. TAPS, when finding paranormal evidence, tends to go through one particular cycle. First, something questionable happens, like a figure passing in front of a camera. A member then exclaims in shock, protesting that it isn’t possible since no one was around, and prepping the audience for what the investigators want them to see. Usually they show the exclamations before actually showing the footage, thus allowing their reaction to influence what the audience will later see. Then, when they finally reveal the footage, the TAPS members immediately shut down any possibility that the experience wasn’t paranormal at all by making a statement that sounds like fact but, in actuality, isn’t. For example, in Episode 104: Race Rock, when the chair seemed to move of its own accord, Grant and Jason both immediately jumped in while reviewing the evidence and stated that the chair could not possibly have been moved with fishing line, as a reflection off the line would be visible on camera. However, a fellow skeptic filmed fishing line attached to a chair leg under various lighting conditions, and it was never visible.

Other statements of supposed fact include that orbs — which sometimes appear in photographs as balls of light — are collections of energy, that spirits drop the temperature of a room by using thermal energy surrounding them in order to appear — sort of like energy sponges, that high EMF readings and high orb activity are usually found in haunted places, and that dowsing rods can be used to indicate the presence of spirits. These statements are all made without the blink of an eye, or a consideration of a reference. In fact, in some of the paranormal investigations, the only thing that makes it paranormal is the word of TAPS themselves. An example can be found in Episode 219: Haunted Lighthouse, where figures are seen on a DVR camera that was filming from the bottom of a spiral staircase looking up. In this footage, a figure can be seen some number of floors up, walking rapidly up the stairs. The TAPS crew perceives this as paranormal, despite their own timestamps, and the titles added during editing placing both Jason and Grant on the stairs at the time the footage was filmed.

However, during the reveal at the end of the show, the timestamp is removed from the footage, and Jason and Grant tell the owners of the lighthouse that no one was on the stairs at that time.

While it is possible that somewhere, somehow a spirit roams the earth, it would seem unlikely that TAPS has discovered it. At Skeptical Analysis of the Paranormal Society, we hope to undo the damage of falsehoods presented as truths by groups like TAPS and educate the public on belief systems, how they are formed, and how groups like TAPS can take advantage of our desires for proof of something beyond.

Please, visit us often, and feel free to contribute information or re-creations of your own. — Alison Smith, Founder of SAPS, [email protected]