In this week’s eSkeptic, we announce Dr. Michael Shermer’s latest book Why Darwin Matters: The Case Against Intelligent Design. Shermer is the founding publisher of Skeptic magazine, the Director of the Skeptics Society, a monthly columnist for Scientific American, and the host of the Skeptics Distinguished Lecture Series at Caltech. He is the author of Science Friction, The Science of Good and Evil, How We Believe, Why People Believe Weird Things, In Darwin’s Shadow, Denying History, and The Borderlands of Science. 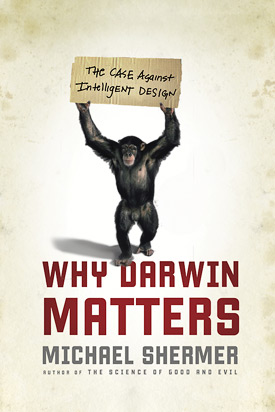 Michael Shermer is one of America’s necessary minds. A reformed fundamentalist who is now an experienced foe of pseudoscience and superstition, he does us the double favor of explaining exactly what creationists believe, and then of demonstrating that they have no case. With his forensic and polemical skill, he could have left them for dead: instead he generously urges them to stop wasting their time (and ours) and do some real work.

A readable and well-researched book on what is perhaps the most vital scientific topic of our age. Anyone who has been snowed into thinking that there is a real scientific controversy over evolution by natural selection will be enlightened by Why Darwin Matters, which is both genial and intellectually uncompromising.

None writes so fiercely in defense of evolution as Shermer … With the sustained indignation of a former creationist, Shermer is savage about the shortcomings of intelligent design and eloquent about the spirituality of science. In Why Darwin Matters, he has assembled an invaluable primer for anyone caught up in an argument with a well-intentioned intelligent design advocate.

In Why Darwin Matters, historian of science and bestselling author Michael Shermer defuses these fears by examining what evolution really is, how we know it happened, and how to test it. Shermer then discusses what science is through a brief history of the evolution-creation controversy from the Scopes “Monkey” trial of 1925, through the U.S. Supreme Court case of 1987, to the ongoing trials today, demonstrating clearly how and why creationism and Intelligent Design theory are not science. Dr. Shermer also builds a powerful case for evolution as the scientific theory that most closely parallels the Christian model of human nature and the conservative model of free market economics.

The most common reason people give for why they believe in God is the good design of the world and the life in it. The question is: who or what is the designer? Why Darwin Matters examines the difference between supernatural design (creationism) v. natural design (evolution) and how evolution can explain complex design.

Dr. Shermer was once an evangelical Christian and a creationist, and is now one of the best-known public intellectuals defending evolutionary theory, so Why Darwin Matters provides readers with an insiders’ guide to the evolution-creation debate, in which he shows why creationism and Intelligent Design are not only bad science, they are bad theology, and why science should be embraced by people of all beliefs.

Last week, Salon.com ran as its cover story an interview with Michael Shermer. The article is one in a series of interviews with leading scientists and thinkers on the topics of religion and science. In this interview “Michael Shermer explains why Darwin matters, how believing in God is the same as believing in astrology, and why it doesn’t take divine faith to experience something bigger than ourselves.”

Also of interest, LA Times writer Robert Lee Hotz and Washington Post writer David Brown review Why Darwin Matters along with other books on intelligent design. On the flip side, the liberal media watch group ‘NewsBusters’ presents their critique of the LA Times review.

an excerpt from
Why Darwin Matters

Charles Darwin is back in the news, with Kansas school board members once again shifting seats Left and Right (with liberals this time winning out), leaving us with a perplexing paradox: in science, evolution is one of the half dozen most well supported theories, right up there with the big bang theory of cosmology and the germ theory of disease; yet, a 2005 Pew Research Center poll found that 42 percent of Americans hold strict creationist views that “living things have existed in their present form since the beginning of time” and that 64 percent said they were open to the idea of teaching creationism in addition to evolution in public schools, while 38 percent said they think evolution should be replaced by creationism in biology classrooms.

How can we explain the great divide between what scientists think and what the public accepts? Being that I was once a creationist when I was a born-again Christian student at Pepperdine University, but have since devoted much of my scientific career to defending the teaching of evolution through popular science books and magazines, I think I have an answer in the form of one general and six specific reasons.

This is what bothers people about evolutionary theory, not the technical details of the science. Most people do not know, nor care about, adaptive radiation, allopatric speciation, phenotypic variation, assortative mating, adaptation and exaptation, gradualism and punctuated equilibrium, and the like. What people want to know is this: If my kids learn about evolution in school are they going to become atheists? Will we lose all meaning and morality? Will society go to hell in an immoral handbasket?

This general fear leads to six specific fears about evolution.

All of these fears are baseless. If one is a theist, it should not matter when God made the universe—10,000 years ago or 10,000,000,000 years ago. The difference of six zeros is meaningless to an omniscient and omnipotent being, and the glory of divine creation cries out for praise regardless of when it happened. Likewise, it should not matter how God created life—whether it was through a miraculous spoken word or through the natural forces of the universe that He created. The grandeur of God’s works command awe regardless of what processes He used.

As for meanings and morals, it is here where our humanity arises from our biology. We evolved as a social primate species with the tendency of being cooperative and altruistic within our own groups, but competitive and bellicose between groups. The purpose of civilization is to help us rise above our hearts of darkness and to accentuate the better angels of our nature.

Believers should embrace science, especially evolutionary theory, for what it has done to reveal the magnificence of the divinity in a depth never dreamed by our ancient ancestors. We have learned a lot in 4,000 years, and that knowledge should never be dreaded or denied. Instead, science should be welcomed by all who cherish human understanding and wisdom.

The one and only Bad Astronomer gives hosts Derek & Swoopy the lowdown on the ultimate taxonomic fate of the “planet” Pluto. Phil also takes a swing at sensational new claims regarding “over-unity” free energy devices. (Perpetual motion claims: the only thing that does go on forever!)