Why Darwin Matters:
The Case for Evolution & Against Intelligent Design

Evolution happened, and the theory describing it is one of the most well founded in all of science. Then why do half of all Americans reject it?…

Godless: The Church of Liberalism

a book review by Matthew Provonsha

Ann Coulter’s new book is vulgar propaganda that goes against both science and reason. She has made a living as the cruel darling of the Religious Right, and in this book she aims her harsh rhetoric against, among other things, evolutionary biology, atheism, and what she calls “liberalism.” The entire book in fact is a sustained attack on a group that doesn’t even exist, namely “liberals,” in the sense of the word that Coulter has made up.

In her own words, Coulter’s thesis is that “Liberalism IS a religion.” She even refers to liberalism as “the state-sanctioned religion.” This is borderline conspiracy theory, from the woman who called the Branch Davidians “harmless American citizens.” In a kind of transubstantiation, we are supposed to believe that despite all outward appearances, our government is actually controlled by atheists. She says, “Democrats revile religion,” and “liberals love to boast that they are not ‘religious.’”

This is absurd. Coulter sticks to generalizations because she can’t give any cogent examples. Martin Luther King Jr. was undeniably Christian and liberal, but I doubt she had him in mind when she wrote, “I would be crestfallen to discover any liberals in heaven.” Ann Coulter is going to heaven and Martin Luther King Jr. is not? For shame.

Coulter can’t name a godless president or member of Congress. The last two Democratic presidents have been born-again Christians, and the vast majority of liberals are Christian, yet Coulter defines “liberals” as people who reject notions of God and an immortal soul. Meanwhile, the overtly Christian Republican Party is in control of all three branches of government. In this aspect of the book, as in others, it is exceedingly difficult to take Coulter seriously, and it is hardly surprising that many commentators on the left and right have questioned her sincerity. 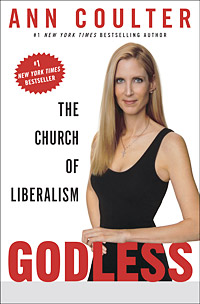 ID proponent William Dembski wrote on his blog that he takes full responsibility for any errors in the last few chapters of the book, which deal with evolution. Several websites have pointed out plenty of them, so if he was being honest, he has got his work cut out for him. But it doesn’t matter how much evidence there is against Coulter because she just lies when the truth gets in the way of her agenda. She lies brazenly in the book about the Dover trial, which ruled the teaching of ID in science classrooms unconstitutional. According to Coulter: “They won the way liberals always win: by finding a court to hand them everything they want on a silver platter.” Here Ann Coulter shows herself to be either completely incompetent or deliberately deceptive. The judge that presided over Kitzmiller v. Dover Area School District is a life-long Republican and a church-goer, appointed to the federal bench in 2002 by President George W. Bush. Clifford A. Rieders, the former president of the Pennsylvania Trial Lawyers Association and a Democrat, said Judge Jones is “universally well regarded.” Coulter’s attempt to smear him is transparently motivated by her ideological concerns, not the facts.

Like other bigots, Ann Coulter attacks what she perceives to be easy targets. In the past she has attacked Arabs, Muslims, and homosexuals, and in this book she saves some of her harshest words for environmentalists and America’s most mistrusted minority, atheists. She writes, “The theory of vegetarianism is that Americans consume ‘too much’ energy.” To the contrary, vegetarianism is not a theory at all, it is the practice of not eating meat. There are a variety of reasons for practicing vegetarianism, and an individual vegetarian’s choice to avoid meat may have nothing at all to do with concerns about over-consumption or inefficient consumption. She adds, “Environmentalists’ energy plan is the repudiation of America and Christian destiny, which is Jet Skis, steak on the electric grill, hot showers, and night skiing.”

This consumerist position is untenable in light of much of Christian and American intellectual history. Coulter can’t point to a verse in the New Testament promoting self-indulgence that could justify the conspicuous consumption of the rich while tens of thousands die every day due to malnutrition and easily treatable diseases. Jesus exhorts his followers, “Sell that which you have, and give gifts to the needy,” and seek treasures in heaven instead of on earth. Nowhere in Coulter’s book does she express concern for the troubled people of the third world where there are food and drug shortages, or for the poor in this country who can’t even afford healthcare, much less jet skis or night skiing.

Coulter’s religion is not like that of the author of the Book of Proverbs, who prayed for neither poverty nor riches but, “only the necessaries of life.” Her religion is not like St. Thomas Aquinas’s, who went so far as to say that anything held in superabundance must be given to provide for the sustenance of the poor. If we are to infer “Christian destiny” by looking at Christian history, we see that Coulter’s ideal is nothing like the ideal put forth by most Christian leaders of the past. St. Francis of Assisi prayed, “O Divine Master, grant that I may not so much seek,” but Coulter has said that the Biblical view is to “rape the planet.”

Coulter’s distortion of history in order to misrepresent atheism is particularly disturbing. She wants us to believe that the horrors of Nazi Germany, the USSR, and the People’s Republic of China are in some way due to atheism and acceptance of evolution. “Hitler’s world-view was based on Darwinism, not God,” she writes. This is clearly a lie designed to denounce Darwinism by association. It is contrary to Hitler’s own words, as even a cursory reading of Mein Kampf shows. In it Hitler writes, “Hence today I believe I am acting in accordance with the will of the Almighty Creator: by defending myself against the Jew, I am fighting for the work of the Lord.” Though she claims that Hitler cited Darwin, she can’t substantiate it, and thus this is yet another baseless assertion. Hitler was obviously either heavily influenced by Christian beliefs, or wanted to appear as though he was. Along with various other influences, Nazism undoubtedly drew from a long-standing Christian tradition of anti-Semitism. As far as I can discern, Hitler never even mentioned Darwin; rather, he repeatedly claimed to be doing the will of Providence.

Coulter’s attempt to blame Darwin for the horrific famines in China is ironic given that they occurred partly because Communist scientists rejected Darwin. Denying what they called “capitalist science,” they paved the way for agricultural catastrophe. Coulter even suggests that Darwin is to blame for “Stalinist gulags.” In reality, Stalin sent scientists to gulags for espousing Darwinian evolution.

Throughout the book Coulter never argues her points, but makes ad hominem attacks and false analogies, attacks straw-men and blatantly misrepresents history. She can’t even distinguish between Darwinism and Social Darwinism. She is as bad on ethics as she is on science, and is completely inept regarding logical reasoning. When she says atheists are always the ones practicing genocide, she shows that she hasn’t even read her scriptures.

There is no “church of liberalism,” there isn’t even “liberalism,” in Coulter’s sense. Liberals are not “pro-abortion,” and no atheist hates God. Godless is a ridiculous book and Ann Coulter lies flagrantly and is as self-righteous as she is malicious. The most controversial line in the book is her condemnation of four 9/11 widows who chose to involve themselves in politics: “I have never seen people enjoying their husbands’ death so much.” But it’s not the only nasty thing she wrote in the book and she has said even worse things in the past. She has used epithets like “raghead,” “paki,” and “gay boy.” She actually said, “My only regret with Timothy McVeigh is he did not go to the New York Times Building.”

Coulter’s fans apparently consider death threats and violent rhetoric humorous, and she doesn’t disappoint them. She is a hate-mongering reactionary who has said she is for public flogging, and against women’s suffrage. I wish I were making this up. Godless is a boring collection of rants filled with utterly mind-boggling absurdities, like, “public schools are the Left’s madrassas,” “The most important value to liberals is destroying human life” (in reference to abortion), and “liberals made up Watergate.” We needn’t worry about misinterpreting her words because she has repeatedly told interviewers that she believes everything she wrote in the book. She has even said that she never regrets anything she has ever said and she wouldn’t have said anything differently. Even if the cynics are right to say that Coulter is laughing all the way to the bank and that she doesn’t really believe any of it, it still reflects horribly on our media that gives her a national platform, and on our culture in which she is thriving with a lucrative speaking career and best-selling books.