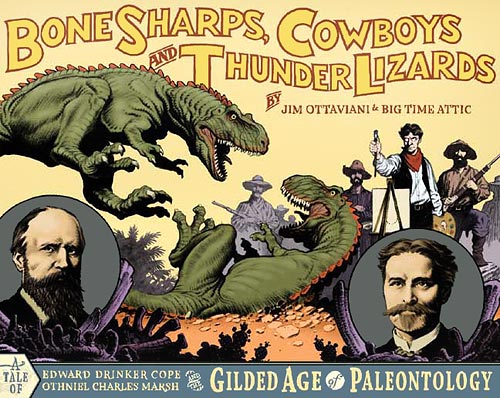 Wham! Pow! Ka-blam!
A special two-part Skepticality blasts
into the world of skepticism in comics!

You’re probably used to finding information on science and skepticism in periodicals like Skeptic magazine, but did you know there were comic books chock full of pure science? Yes, comics!

This week we interview not one, but two authors of comic books and graphic novels dealing with the themes of science and skepticism: Chris Wisnia (creator of the irrepressible Dr. DeBunko) and Jim Ottaviani (creator of graphic novels about scientists from Niels Bohr to Othniel Marsh). There was so much great information, we had to make two complete episodes — and we’ve released them for you back-to-back!

Graphic novel creator Jim Ottaviani shares his adventures telling stories from the lives of renowned scientists — with a little help from Ray Bradbury and Ray Harryhausen, the granddaughter of legendary paleo-artist Charles R. Knight, the Teenage Mutant Ninja Turtles, and the Nobel museum.

Is there a scientific connection between prayer and healing? A majority of Americans believe there is, but by taking a hard look at the scientific evidence, Columbia University Professor of Behavioral Medicine, Richard Sloan, believes there is no proven curative power to prayer and that the use of it as a medical treatment undermines effective patient care. Sloan exposes the questionable research practices and unfounded claims made by scientists who manipulate scientific data and research results to support their claim of effective mystical intervention in healing.

In this week’s eSkeptic, William A. Wisdom responds to Robert K. Eberle’s review of Francis S. Collins’ The Language of God (eSkeptic, Tuesday 3 October 2006). In the review Eberle wrote:

Beyond this, however, Collins has logical issues. Aside from his simple declarations without any foundation that he believes certain biblical stories and miracles are true, he runs into major problems. One is the claim that God knows what was, is and will be. Collins asserts that there is still free will, but fails to explain his logic for arriving at this extraordinary conclusion. Either what will be is known and fixed or it is not. An infallible god that knows what is going to happen is in conflict with the idea that there is free choice and thus a responsibility for one’s actions.

Below W.A. Wisdom shows that God’s knowledge of all future events is not “in conflict with the idea that there is free choice and thus a responsibility for one’s actions.”

by William A. Wisdom

Here I intend not to address the compatibility of freedom and determinism, but to address a closely related issue: the compatibility of freedom and foreknowledge. People are free if they are able to choose and act according to the dictates of their own will. This closely parallels David Hume’s formula: By freedom we can only mean “a power of acting or not acting, according to the determinations of the will; that is, if we choose to remain at rest, we may; if we choose to move, we also may.” Perhaps this expresses the same point: A person’s action is free just in case he would have acted differently if he had chosen differently.

When I say that some person’s action is foreknown, I mean that prior to that action, somebody knows (not just has good reason strongly to believe, but knows) that it will occur. By virtue of what knowledge is, any statement that is known is true; you can’t know something that is false. So, to use Aristotle’s example, if I now know that there will be a sea-battle tomorrow, then it is now true that there will be a sea-battle tomorrow.

It certainly seems, at first blush, that these theses can’t all be true. If the omniscient God has always known that I would write this paper today, then it has been true from all eternity that I would do so. It certainly looks like I have no choice — at least no effective choice — in the matter. It makes no difference at all what I choose to do. I will write this paper no matter what. It looks like my choices are irrelevant, and that the writing of the paper is inevitable. The same applies to everything that everybody does. Given that, it certainly looks like we are never free.

This conclusion has led some people to deny that God is omniscient. On the other hand, it has led some Christians, focusing on Scriptural talk about election and predestination, to deny that we are free. I mean to show that such dodges are quite unnecessary, since God’s foreknowledge of our actions is compatible with our freedom.

Here we take some cues from G. W. Leibniz (1646–1716), German philosopher, mathematician, and logician. A possible world is a way things might unfold or develop in reality. Of course, we live in one possible world. But there are infinitely many other possible worlds — other collections of things that would develop in other ways. If you need to picture them, suppose that they are all held in God’s imagination, none of them yet “actualized.” Some are similar to ours and others are quite different. Some have more things in them than ours, and some less. Some are governed by simpler or fewer principles or “laws of nature” and some by more complex or more numerous laws. If you want to picture a possible world other than our own, just imagine this world different in some major or minor way. And some possible worlds are so radically different from our own that we can’t even imagine them. All that’s required is that they be possible worlds — that the concepts thereof contain no self-contradictions. None is yet a real world.

God scans the infinitely many details of each of these infinitely many possible worlds. For reasons that are irrelevant here, He decides to “actualize” or bring into reality one of these possible worlds. As it turns out, He chooses one of the possibilities in which some human conduct is free. And of course He knows everything that will ever happen in that world. After all, He understood every detail before He decided to bring it into existence.

Now think about it. His having chosen to actualize a possible world in which action is free doesn’t change that action from free to necessitated or compelled. Why? Because the actualized world is exactly the same world the concept of which was in God’s mind prior to creation — a world of free creatures. If people’s behavior in this real world were necessitated, it wouldn’t be the possible world that God selected; it would be a different possible world.

I’m not arguing that this is the way the world came to be. Nor am I arguing that some human action is free. I have only established that human freedom is fully compatible with God’s foreknowledge of all our (mis)behavior.