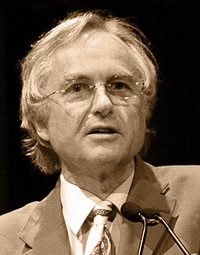 In a lecture based on his new book The God Delusion, celebrated Oxford biologist Dawkins fires a direct no holds barred salvo against organized religion. He argues that belief in “The God Hypothesis” is both intellectually wrong, and a divisive and oppressive force that contributes to social backwardness and bigotry. He states, “I am hostile to fundamentalist religion because it actively debauches the scientific enterprise. It teaches us not to change our minds, and not to want to know exciting things that are available to be known. It subverts science and saps the intellect.” This carefully-reasoned, yet entertaining and insightful analysis by one of the great minds of our time will give both atheists and believers something to think about.

Long-time fans of Derek & Swoopy, here’s the episode you’ve been clamoring for! This week, Skepticality delivers a full episode of discussion and listener commentary on one of our most popular shows to date: Episode 34, Michael Shermer’s in-depth interview with the legendary James Randi, deep in the dreaded (yet balmy) Bermuda Triangle.

The press release which follows this introduction was sent to me recently by Jon-Erik Beckjord, a long-time Bigfoot hunter. It came attached with four photographs, which we present here untouched, along with the release accompanying them. Maybe I’m just a lousy pattern-seeking primate, but I just can’t see Bigfoot at all, even when I squint and use my imagination.

As an interesting back story to this, I emailed Beckjord to make sure it was okay to post his photographs. He agreed that it was fine, but insisted that I call him first, which I did. It was a most enlightening conversation. When I explained that, try as I may, I could not for the life of me see the creature in the phone, he insisted that everyone he showed these photos to without hesitation said things like “what’s that monkey doing there?” I then asked him, “Why are there no Bigfoot bodies?” That is, if you want to name a new species, you have to actually present to the scientific community a type specimen. Beckjord’s answer was most interesting: turns out that Bigfoot is not a primate evolved here on Earth, but is in fact a being from a parallel universe who pops in and out of our universe through worm holes. He referenced Einstein and Michio Kaku for this particular interpretation of quantum physics, and went on to explain that the worm hole/parallel universe theory also explains why we have no crashed UFOs, no alien bodies, along with ghost sightings, visitations from lost loved ones, and the like. So, in conclusion, Beckjord said that we do not now have—and never will have—physical evidence of Bigfoot.

The text follows and all the photos can be found on Beckjord’s website. I don’t think they need any further commentary.

a press release from Jon-Erik Beckjord

Press Release — For Immediate Release
(These are absolutely not hoaxed nor faked. No Photoshop, only 35mm film.)

After quality printing and enhancement, a Bigfoot photo taken 9/27/06 on an expedition in CA can now be shown.

Bigfoot was photographed while unseen in High Sierras of CA, when members of a camping trip encountered screams by a possible Bigfoot in response to “Call blasting” of other bigfoot screams, and found several old Bigfoot tracks. However, during a walk around the other side of a pond at the El Dorado National Forest Site (between Stockton and Lake Tahoe), Jon-Erik Beckjord investigated a spot where girlfriend Chris Pitts had seen a brief flash of what seemed like Bigfoot from the previous day, and while standing there, took several photos of the campsite looking across the pond. In two photos in 35mm color, using a pocket camera, there appears to be a Bigfoot creature standing by a camp vehicle, looking back at the camera. A head, torso, and a well-muscled arm are visible.

“Long photo cropped to show Ms. Pitts (right) in blue shirt, and Bigfoot by car, on left by tree. The green brush seen in the center obscured her view of the Bigfoot.” (above photograph © 2006 Jon-Erik Beckjord, used here with permission. View other images on Beckjord’s website.)

Also, many people are able to see a male organ on the creature in the photo. (Note — there was a tent rope to the tree, on which a pair of white shorts were drying. Also the tent rope supported a blue tarp. Let there be no absurd comments about the drying shorts, they had nothing to do with the creature but they did obscure part of the abdomen.) The head has a strong and wide nose. In one shot, Ms. Pitts is standing 30 feet away and in the other, she is not visible. The film was 200 ASA Kodak color print film. Shot 5 was normal view, and shot 6 was telephoto. Beckjord, the photographer, did not see the creature, some 200 feet away, as often happens at this site during previous expeditions. Assuming the car is 5.5 ft in height, the creature looks to be about 10 ft. For some reason, these creatures feel safer when men are out of the camp area, such as across a creek or pond, at least 200 feet away. (Perhaps they are traumatized by deer hunters with rifles, and are cautious.) In any case, they are more timid than chimps at Gombe Stream, where Dr. Jane Goodall did her research. Dr. Goodall has stated several times that she feels there is a possibility that such large primates as these may inhabit North America.

Several biologists have viewed the image, and one has been willing to make a limited statement. Dr. Thomas Tomasi of SW Missouri State Univ., says that it looks to him like “a large unidentified primate.” People on the street, of all backgrounds, from doctors to clerks, say: “What’s that big monkey?”

View images at this page.

Former images from other years may be seen at www.beckjord.com/bigfoottribephotos

Other expeditions are planned for other parts of the US, depending on how many sign up. See this page.

Photo is © 2006 Jon-Erik Beckjord but press can have one-time use at no charge.