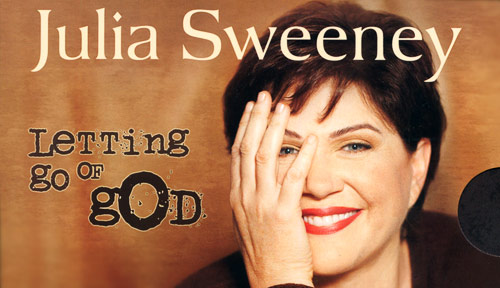 An excerpt of this show, “Letting Go of God” is the single most popular story we’ve ever put on our show in over ten years on the air. We were deluged with email. Flooded. Overwhelmed. Somehow, against all common sense Julia is making something funny that has no business being funny. So buy this CD … if you dare.

This two CD set includes a 102 page CD-sized illustrated transcript of the performance illustrated with engravings by Gustave Doré.

Julia Sweeney was a cast member of Saturday Night Live from 1989 to 1994. She starred in and co-wrote It’s Pat — The Movie released in 1995. In addition to many other television and small movie roles she served as a consulting producer on the last three seasons of Sex and the City and was a consulting producer for the second season of Desperate Housewives. This is Julia Sweeney’s third monologue. Her first monologue And God Said Ha! was nominated for a Grammy. 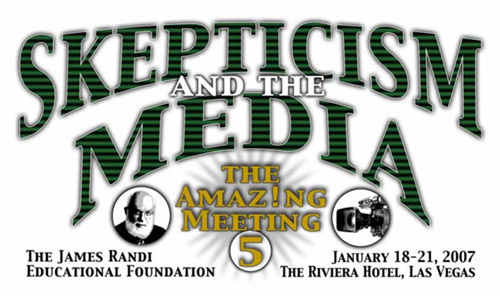 Randi has once again compiled a remarkable line-up of speakers, including:

Oh, and that Shermer guy is going to lecture on the topic of his next book (evolutionary economics) that he is presently writing, in order to try out some new ideas on some very skeptical people. Double oh, and that Randi guy may regale us with a few stories and acts of prestidigitation.

What Happens at The Amazing Meeting?

The Amazing Meeting is a celebration of skepticism and critical thinking. Skeptics and thinkers from around the world come together once a year to be educated and entertained by distinguished scientists, outspoken journalists, and cutting-edge entertainers. Panel discussions will provide much food for thought.

In addition to all the lectures, discussions, panels, and entertainment, there will be two workshops to choose from this year:

Grassroots Media Training
This critical thinking workshop will prepare you to get behind the microphone or camera and get your point across, despite the intentions of the host. Learn how to dress, what to say, and most importantly, how to stay on message so that the things you mean are heard by the audience. Whether you’re someone who writes letters to the editor or you appear on Larry King Live, this training will prepare you to make the most of your time in the spotlight.
Getting Critical Thinking Curricula into the Classroom
This intensive will examine the challenges that face teachers and curriculum developers from the elementary school to the university level. Methods for meeting those challenges and practical exercises for teachers to take back with them to the classroom with be discussed.

What is the James Randi Educational Foundation?

The James Randi Educational Foundation is a not-for-profit organization founded in 1996. Its aim is to promote critical thinking by reaching out to the public and media with reliable information about paranormal and supernatural ideas so widespread in our society today.

Don’t miss what promises to be another terrific conference.
Also, for the next two days, an early registration discount is available!

A History of the End of the World:
How the Most Controversial Book in the Bible
Changed the Course of Western Civilization

Jonathan Kirsch is the author of God Against the Gods, The Woman Who Laughed at God, King David, Moses, and The Harlot by the Side of the Road.

The question of how and when the world will end has captivated thinkers for centuries. Wars, natural disasters, social upheaval and personal suffering often send believers back to the writings of their prophets and seers, whose gift is to bring satisfying answers to such questions. The book most studied in the Western tradition is Revelation, the last entry in the Christian canon. Kirsch, a book columnist for the Los Angeles Times and the author of numerous bestsellers about the Bible, takes the reader on a delightful 2,000-year journey and shows how churches, philosophers, clergy and armchair interpreters have promoted their political, social and religious agendas based on their belief that the end was imminent. Some of this history can be quite sobering, as the powerful have waged wars and built societies based on their varying perceptions of Revelation’s message. However, consistent with Kirsch’s earlier literary efforts, in particular The Harlot by the Side of the Road, the author exercises great care while treating his material with both sobriety and a healthy sense of the ironic. 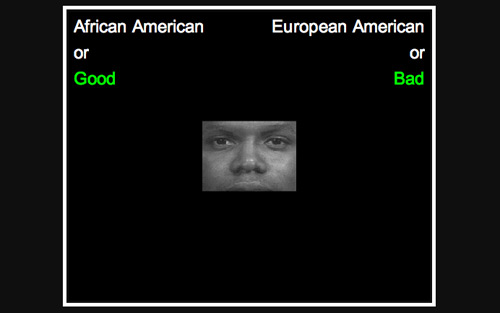 an opinion editorial by Michael Shermer

After a paroxysm of racial viciousness at the Laugh Factory Friday night, November 17, 2006, Michael Richards, the 57-year old comedian who played Kramer on Seinfeld, explained to David Letterman and his Late Night audience the following Monday, after a barrage of negative publicity: “I’m not a racist. That’s what’s so insane about this.”

Michael’s shattered demeanor and heartfelt repentance leaves us with what I shall call Kramer’s Conundrum: how can someone who spews racial epithets genuinely believe he is not a racist? The answer is to be found in the difference between our conscious and unconscious attitudes, and our public and private thoughts.

Consciously and publicly, most of us are colorblind. And most of us, most of the time, under most conditions, believe and act on that cultural requisite. You’d have to be insane to publicly utter racist remarks in today’s society … or temporarily insane, which both science and the law recognize as being sometimes triggered by anger. And alcohol — recall Mel Gibson’s drunken eruption about Jews, or the college Frat boys slurring alcohol-induced insanities about blacks and slavery in Sacha Baron Cohen’s film Borat.

The insidiousness of racism is due to the fact that it arises out of the deep recesses of our unconscious. We may be utterly unaware of it, yet it lurks there ready to erupt under certain circumstances. How can we know this? Even without anger and alcohol, Harvard scientists have found a method in an instrument called the Implicit Association Test (IAT), which asks subjects to pair words and concepts. The more closely associated the words and concepts are, the quicker the response to them will be in the key-pressing sorting task (try it yourself at https://implicit.harvard.edu/implicit/).

The next task is a little more complicated. The words and black and white faces appear on the screen one at a time, and you sort them into one of these categories: African American/Good or European American/Bad. Again you match the words with the concepts of good or bad, and faces with national origin. So the word “joy” would go into the first category and a white face would go into the second category. This sorting goes noticeably slower, but you might expect that since the combined categories are more cognitively complex.

But I’m not a racist. How can this be? It turns out that this subconscious association of good with European Americans is true for everyone, even African Americans, no matter how color blind we all claim to be. Such is the power of culture.

We are by nature sorters. Evolutionists theorize that we evolved in small bands of hunter-gatherers where there was a selection for within-group amity and between-group enmity. With our fellow in-group members, we are cooperative and altruistic. Unfortunately, the down side to this pro-social bonding is that we are also quite tribal and xenophobic to out-group members.

This natural tendency to sort people into Within-Group/Good and Between-Group/Bad is shaped by culture, such that all Americans, including those whose ancestry is African, implicitly inculcate the cultural association, which includes additional prejudices.

The IAT, in fact, also demonstrates that we prefer young to old, thin to fat, straight to gay, and such associations as family-females and career-males, liberal arts-females and science-males. Such associations bubble just below the surface, inhibited by cultural restraints but susceptible to eruption under extreme inebriation or duress.

Michael Richards’ sin was his deed; his thoughts are the sin of all humanity. Only when all people are considered to be members of one global in-group (in principle, if not in practice) can we begin to attenuate these out-group associations. But it won’t be easy. Vigilance is the watchword of both freedom and dignity.

We should accept Mr. Richards’ apology for losing his temper and acting out those hateful thoughts. Perhaps we also ought to thank him for having the courage to confess in public what far too many of us still harbor in private, often in the privacy of our unconscious minds. As the Russian novelist Fyodor Dostoyevsky wrote:

Every man has reminiscences which he would not tell to everyone but only his friends. He has other matters in his mind which he would not reveal even to his friends, but only to himself, and that in secret. But there are other things which a man is afraid to tell even to himself, and every decent man has a number of such things stored away in his mind.