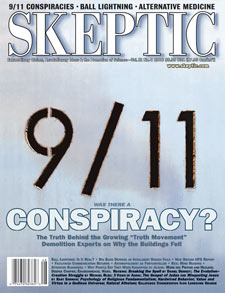 In this issue of Skeptic magazine, Phil Molé puts the 9/11 Truth Movement in perspective and demolition experts examine the arguments of conspiracy theorists. Also, you’ll get James Randi on psychics, the SkepDoc on alternative medicine; a critique of Michael Behe’s Big Bang defense of Intelligent Design; and an anthropologist’s first hand experience on the function of fortune telling in an impoverished society. Plus: who are the people who say they were abducted by aliens?, artificial intelligence, prayer & healing, the ball lightning conundrum, and 3 views of anti-aging. Reviews of The Gospel of Judas, Lonesome George, Conservation Icon; Religion as a Natural Phenomenon, by Daniel Dennett The Evolution-Creation Struggle, by Michael Ruse; Misquoting Jesus, by Bart Ehrman, and more…

Zimmerman founded and wrote all the material for the satirical folk quartet The Foremen, who recorded for Warner Reprise throughout the nineties. As a solo artist, he’s released five albums, the latest of which is Faulty Intelligence. “I hope it gets good reviews,” he says, “but mostly I hope it gets denied under oath by Karl Rove.”

Cheesecake (and Beefcake!)
in Support of Critical Thinking? 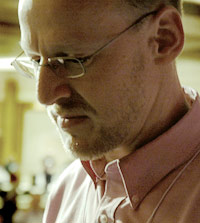 Quick — what do pin-up photos of famous skeptics and the James Randi Educational Foundation’s The Amazing Meeting conference have in common? Why, this week’s episode of Skepticality, of course!

Plus: a sneak peak at next episode’s MythBusters interviews! 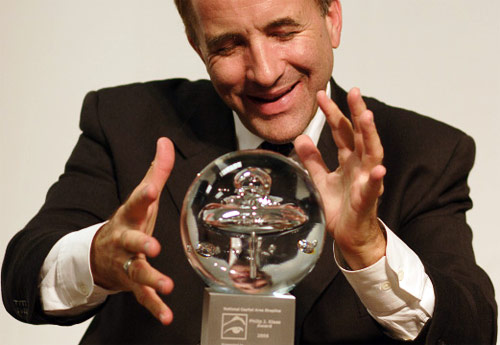 Double accolades for Why Darwin Matters

In October 2006, during a book tour for Why Darwin Matters, the National Capital Area Skeptics presented to Michael Shermer the Philip J. Klass award for outstanding contributions in promoting critical thinking and scientific understanding.

Also last month, the Kansas City Star named Why Darwin Matters on its list of 100 noteworthy books chosen by The Star’s literary panel.

Michael Shermer’s lecture at Caltech on the topic of Why Darwin Matters is now available at shop skeptic on DVD, VHS, and other audio visual formats.

In this lecture, Dr. Shermer defuses objections to the theory of evolution by examining what it really is, how we know it happened, and how to test it. He discusses what science is, demonstrating clearly how and why creationism and Intelligent Design are not science. Then, he builds a powerful case for evolution as the scientific theory that most closely parallels the Christian model of human nature and the conservative model of free market economics. Once an evangelical Christian and a creationist, Michael Shermer provides readers with an insider’s guide to the evolution-creation debate, and why science should be embraced by people of all beliefs.

Looking for good gift ideas
for skeptical loved ones?

stocking stuffers (each are $5)