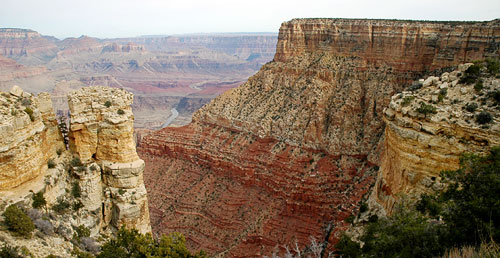 The first sentence of the release reads:

Washington, DC — Grand Canyon National Park is not permitted to give an official estimate of the geologic age of its principal feature, due to pressure from Bush administration appointees.

Unfortunately, in our eagerness to find additional examples of the inappropriate intrusion of religion in American public life (as if we actually needed more), we accepted this claim by PEER without calling the National Park Service (NPS) or the Grand Canyon National Park (GCNP) to check it. As a testimony to the quality of our readers, however, dozens immediately phoned both NPS and GCNP, only to discover that the claim is absolutely false. Callers were told that the Grand Canyon is millions of years old, that no one is being pressured from Bush administration appointees — or by anyone else — to withhold scientific information, and all were referred to a statement by David Barna, Chief of Public Affairs, National Park Service as to the park’s official position. “Therefore, our interpretive talks, way-side exhibits, visitor center films, etc. use the following explanation for the age of the geologic features at Grand Canyon,” the document explains.

If asked the age of the Grand Canyon, our rangers use the following answer: ‘The principal consensus among geologists is that the Colorado River basin has developed in the past 40 million years and that the Grand Canyon itself is probably less than five to six million years old. The result of all this erosion is one of the most complete geologic columns on the planet.’

Understandably, many of our readers were outraged by both the duplicity of the claim and our failure to fact check it. One park ranger wrote us:

You’re a day late and a dollar short on this one. As a national park ranger, I found most of PEER’s findings to be bogus. So have others: http://parkrangerx.blogspot.com

This is incorrect. I have NEVER been told to present non-science based programs. In fact, I received “talking points” demanding that Grand Canyon employees present programs BASED ON SCIENCE and that we must use the scientific version supported by the National Science Foundation and the National Academy of Sciences. As an interpreter I have shared the “creation” story of the Hopi people and the Paiute people because it is culturally relative. I used these stories as a tool to introduce the scientific story. Be confident there are good people running government, too.

One of our readers directly challenged Jeff Ruch, the Executive Director of PEER:

When I challenged that PEER guy to show me some evidence and provided him evidence to the contrary, he didn’t have much. I would say PEER did more than jump the gun. I’d say they are spreading misinformation.

Ruch’s attempts to insinuate a conspiratorial link between the NPS and organized religion are misguided and founded in fervent anti-Christian opposition, not reason or the law. Ruch’s anti-Judeo-Christian bias is evidence by his lack of opposition to GCA’s selling of Native American creation myths. His misinformation campaign aims to tarnish the reputation of the NPS to leverage his position that creationism books should not be sold in the GCA bookstore. I’ve emailed a few of my contacts at GRCA, and so far, all deny any conspiracy and all freely give the canyon’s age in education programs (as does all official GRCA print material). I’ll post updates as information becomes available. Until then, don’t believe everything you read.

The reference to the creationism book being sold in the Grand Canyon bookstore — Grand Canyon: A Different View by Tom Vail — is true. It is sold in the “inspiration” section of the bookstore, alongside other books of myth and spirituality. In any case, the story is an old one now, and completely irrelevant to the claim that NPS employees are withholding information about the age of the canyon, and/or are being pressured to do so by Bush administration appointees.

Embarrassed and angered by all of this, I promptly phoned Jeff Ruch myself and inquired what evidence he has to support this claim. He initially pointed to the creationism book and the fact that the NPS has failed to address numerous challenges to the sale of same in their bookstore. When I pointed out that this is irrelevant to the claim in the press release, he then reminded me of the biblical passages that have been posted at places along the rim of the canyon. Again, I admonished, this is not evidence for his central claim. We went round and round on the phone until I finally gave up and hung up, convinced that he simply made up the claim out of whole cloth.

Not wishing to simply call Ruch a liar, and allowing myself to calm down a bit, I emailed him and asked:

Can you tell us who in the Bush administration put pressure on park service employees? Can you name one person in the GCNP staff who says that they are not permitted to give the official estimate of the age of the canyon?

I contacted Julie Cart at the Los Angeles Times, who was out of town on assignment, and got her editor, Frank Clifford, on the phone. Clifford knew all about the creationism book and the biblical passages on the rim of the canyon, but said that he had heard nothing about this new claim of Bush administration appointees silencing park service staff, and that if Julie knew of such a thing the Times would be most interested in following up with the story. I then reached Julie by email, who said that she too knew of no such silence on the part of park staffers regarding the age of the canyon.

Once again outraged and enraged , I emailed Ruch to ask him why he referenced Cart, who denied his central claim. He responded:

I referred you to Julie because of the response she got from the superintendent’s office when she covered the issue earlier — not for any new claim.

Thanks a lot. I wasted several hours tracking down that false lead. Now at my wit’s end with this guy, I point blank asked him if he made it all up. He responded:

The interpretive staff at GCNP we are working with do not want to be identified and have gone into deep underground as the atmosphere at the park is now somewhat volatile.

Well, it would have been nice (not to mention ethical) if he would have said so in the first place. (I have now wasted about 10 hours of research time on this instead of other projects.) The referencing of sources who wish to remain anonymous is quite common in journalism and, in fact, there are laws protecting whistleblowers . The fact that no such reference was made until I pointedly accused Ruch of flatout lying makes me, well, skeptical of this explanation. His final statement to me doesn’t make me any less skeptical:

We are issuing an amended release today that

Then why did PEER issue that statement in the first place? In my opinion, this is why:

PEER is an anti-Bush, anti-religion liberal activist watchdog group in search of demons to exorcise and dragons to slay. On one level, that’s how the system works in a free society, and there are plenty of pro-Bush, pro-religion conservative activist watchdog groups who do the same thing on the other side. Maybe in a Hegelian process of thesis-antithesis-synthesis we find truth that way; at least at the level of talk radio. But journalistic standards and scholarly ethics still hold sway at all levels of discourse that matter, and to that end I believe we were duped by an activist group who at the very least exaggerated a claim and published it in order to gain notoriety for itself, or worse, simply made it up.

To that end I apologize to all of our readers for not fact checking this story before publishing it on eSkeptic and www.skeptic.com. Shame on us. But shame on you too, Mr. Ruch, and shame on PEER, for this egregious display of poor judgment and unethical behavior.

Michael A. Stackpole (photograph by Swoopy)

This week on Skepticality, Derek & Swoopy are practically out the door on the way to The Amazing Meeting 5! But before they go, they talk with New York Times Best Selling author Michael A. Stackpole, Chairman of the Phoenix Skeptics Society, about the group’s 2007 predictions list and the accuracy of their 2006 predictions. Mr. Stackpole discusses balancing skepticism in his daily life with his work as a science fiction author and role playing game designer, and gives his views on practical methods for teaching critical thinking.