We have a special treat in the form of four short films produced, written, and starring Brian Dalton, a long-time friend of the Skeptics Society and Skeptic magazine who, in fact, redesigned Skeptic magazine for us a few years ago. Brian is a creative genius who has many talents and interests, and in his latest project he explores the lighter side of religion through these humorous short films. Launched only last Monday, January 17, within a few days there were over 200,000 downloads of them from YouTube, iTunes, and at his own webpage, mrdeity.com. Everyone who watches them — whether religious, nonreligious, or antireligious — enjoys the wit and humor.

Brian is an ex-Mormon who came to skepticism in the late 1990s through the Skeptics Society, because he liked our nonconfrontational approach that allowed him to explore the many options available to believers who harbor doubts. In time he gave up his religion, but remains utterly fascinated by religion in general, and he has written a pilot for a television series based on his character, Mr. Deity. Enjoy!

In this week’s eSkeptic Kenneth W. Krause reviews Sam Harris’ book Letter to a Christian Nation (Knopf, 2006, ISBN 0307265773). Krause lives in Wisconsin, along the Mississippi River. He is a former prosecutor and criminal defense attorney with degrees in law, history, literature, and fine art. Books editor for Secular Nation, Kenneth has recently contributed as well to Free Inquiry, Skeptic, and The Humanist. 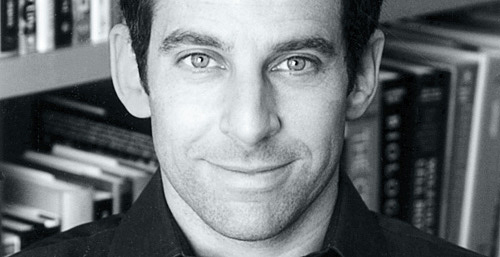 Sam Harris, author of Letter to a Christian Nation (photograph by Sara Allan)

The End of Faith Revisited: a Good Start

Reason is to morality what design is to construction, and monotheism is a collective intellectual disaster that necessarily implies an international moral emergency. So says Sam Harris in his predictably candid, derisive and hyper-focused Letter to a Christian Nation, as he lectures an audience of agitated religionists who protested similar and, in some instances, identical scolds dispensed through his first book, The End of Faith.

Faith, by some accounts, is conviction to a belief despite facts and reason. When overwhelming majorities accept lesser standards of intellectual integrity, faith becomes institutionalized and potentially dangerous. Faith in omnipotence only exacerbates the problem. Christianity and Islam, especially, because they define in- and out-groups in terms of perpetual rewards and punishments, are inherently dangerous. Monotheists define morality according to no objective standard outside the Bible. Instead, religious affiliation necessarily depends upon the foundational texts that attempt in vain to identify both ethical and non-ethical behavior. Hence, for the faithful, any conceivable act may be defined as moral so long as the relevant god’s text can be interpreted to support it. Humans may piously slaughter other humans in any number, in any imaginable way, simply because their faith allows them to trust in an omnipotent and omni-benevolent creator who desires or all too regularly demands that they do so.

The Christian faithful, Harris contends, have inherited some of the most unethical standards imaginable. Consistent with Proverbs, Leviticus, Deuteronomy, Exodus, Mark and Matthew, pious parents are obliged to thrash or kill their disobedient children. The Abrahamic texts insist that followers stone not only the adulterer, but also those who labor on the Sabbath. Although some Christians will argue that New Testament morals have superseded those of the Old, Harris counters that, according to the former, Jesus instructed his followers to remain true to the ancient laws. The Church incinerated heretics for more than 500 years as it cited allegedly validating chapter and verse. Augustine supposed that dissenters should be tortured; Aquinas directed that they be murdered. Both Luther and Calvin encouraged the slaughter of innocent apostates and Jews. In no Christian text was Jesus said to have objected to slavery; in many was the practice condoned.

The first four of the Ten Commandments, Harris observes, had nothing to do with morality. The rest clearly did, but were hardly original. Virtually every culture edified similar principles in its annals, laws, and myths. Regardless, morality predates recorded history and, perhaps, humanity itself. Our closest primate relatives demonstrate some degree of kin altruism and broader social concern. The point, of course, is that religious ethics represent only one phase of our moral evolution, a phase that humanity can and must transcend.

Hopelessly antiquated religions have grown increasingly counterproductive as sources of moral guidance. Christians delight in imagining themselves supremely ethical in their opposition to embryonic stem cell research and abortion. But neither stem cell use nor legal abortions harm anything capable of either experiencing loss or inspiring a reasonable sense of loss in others. Insisting that human “souls” can inhabit the microscopic recesses of a Petri dish is not a moral argument. Rather, it is the imposition of both intellectual and moral primitivism.

Indeed, religious ethics often seem impervious to empathy. Many Christian conservatives oppose vaccination for the human papillomavirus, now the most common sexually transmitted disease in America, largely because they consider HPV an obstacle to premarital sex. The Vatican contests condom use even to thwart the spread of HIV. Christopher Hitchens summarized the crisis well when he pointed out that Mother Teresa “was not a friend of the poor. She was a friend of poverty. She said that suffering was a gift from God.” Teresa might have performed admirable deeds for humanity as an individual, but it should be clear that she brought such goodness despite, rather than because of, her religion. That so much suffering can be directly attributed to religion, Harris concludes, should inform us that honest and thorough criticism of religious faith is both our intellectual and our moral responsibility.

To religious moderates, Harris offers neither sanctuary nor convenient alliance. Temperance and tolerance are not solutions to this deadly predicament. To the contrary, religious liberalism’s demand for respect only lends ostensible though certainly not actual credibility to religious dogma and fanaticism. Moderates simply cannot continue to have it both ways, the author demands. Either human beings created the Bible, or they did not. Either Christ was a man, or he was not. If so, the fundamental and necessary tenets of Christianity are and have always been false. At some point, Harris persists, one side will win and the other will lose.

Speaking truth to both religious and secular power, however redundantly, has become Sam Harris’s claim to fame, perhaps even his raison d’être. Although the underlying problem is a bit more complex than the author appears to recognize, his assessment of faith’s threat to human survival is sound. Arguably, much of the developed world seems well on its way to begetting the end of faith, or, more precisely, faith of the licensed, monotheistic variety. In America, of course, the crisis is more severe; a mere letter to a Christian nation will never suffice. But if such letters are read and rejoined by the right Christians, perhaps history might prove them to have been a very good start indeed.