Report from The Amazing Meeting 5! (part 2)

This week on Skepticality, we continue our coverage of James Randi’s The Amazing Meeting 5 conference in Las Vegas. Derek & Swoopy talk with some of their favorite Real Skeptical Heroes, including author and CSICOP spokesperson Benjamin Radford, MythBuster Adam Savage — and the first Congressional lobbyist for nontheists and director of the Secular Coalition for America, former Nevada State Senator Lori Lipman Brown.

In this week’s eSkeptic Kenneth Krause reviews Nicholas Wade’s book, Before the Dawn: Recovering the Lost History of Our Ancestors (Penguin, 2006, ISBN 1594200793).

Kenneth W. Krause is a former prosecutor and criminal defense attorney with degrees in law, history, literature, and fine art. Books editor for Secular Nation, Kenneth has recently contributed as well to Free Inquiry, Skeptic, Skeptical Inquirer, and The Humanist.

In Before the Dawn, Nicholas Wade, science writer for the New York Times, traces our ancestral population’s unlikely prehistoric passage out of Africa through the Gate of Grief, eastward into Sunda and Sahul for some, northward into modern day Turkey and Iran for others. Mastery of language, pair mating, and a swiftly swelling intellect were among the crucial innovations that allowed humans to embark on this epic voyage, to overcome their aggressive hunter-gatherer past, and embrace a settled, cooperative, and civilized future.

Wade relies on a recent “cascade of DNA data” that has enabled scientists to reconstruct an especially critical leg of the modern human journey. During the last 50,000 years, Wade explains, an anatomically consistent population has fashioned and been fashioned by an entirely new social structure based on trust instead of tyranny, reciprocity rather than retribution. A fully articulate language probably co-evolved with some form of religion approximately 50,000 years ago, the former facilitating, among other things, deception and economic interaction, the latter providing a means, albeit imperfect, by which to deter dishonesty and freeloading. 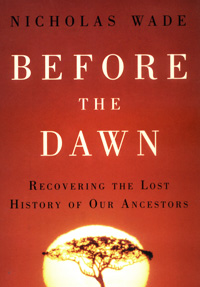 And it was language as well that supplied the ancestral population with the organizational and executive talents required to traverse the African border and compete against the Neanderthals, evidence of which vanished from the archeological record about 30,000 years ago.

Wade suggests that, in many important ways, the ancestral population might have resembled the modern !Kung San, many of whom lived as hunter-gatherers in Africa well into the 1970s. He deduces this hypothesis from the San population’s unique Y chromosomes and mitochondrial DNA, each of which can be distinguished as descending from the oldest branches of the human genetic trees, plus the fact that, although populations generally continue to adapt to their surroundings, hunter-gatherers tend toward genetic consistency consequent to their presumably static environment. The author infers as well that, like the !Kung San, the ancestral people might have developed a click language (the “!” in !Kung represents a specific click sound), since such languages are often lost but seldom invented. Similarly, our ancestors likely thrived in small, egalitarian societies of no more than 150 persons or so that constantly battled one another. Undoubtedly, religion served to unite them in war when mere kinship could not.

But the rate of human evolution probably accelerated following the ancestral population’s exodus from eastern Africa, given the extraordinary environmental changes they must have experienced throughout their migrations. According to Wade, “specific evidence has now emerged suggesting that the human brain has continued to evolve over the last 50,000 years.” Indeed, two genes determining brain capacity were recently discovered by the University of Chicago geneticist Bruce Lahn. Lahn found that an alternative version of the microcephalin gene appeared some 37,000 years ago and is currently carried by approximately 70 percent of Europeans and East Asians, but only 0 to 25 percent of sub-Saharan Africans. Similarly, the ASPM allele surfaced in the Middle East or in Europe some 6,000 years ago and is now carried by 50 percent of those populations, being far less common in both East Asia and sub-Saharan Africa.

Although it “seems likely that each new allele conferred some cognitive advantage,” Wade concludes, “there is at present no evidence that the microcephalin or ASPM genes do anything other than determine brain size.” At this time, perhaps the most one can infer from Lahn’s findings is that human evolution continues and that it takes divergent forms and proceeds at different paces among dissimilarly situated populations. No matter how it is interpreted, this data apparently offers a more complex, if not a completely alternative, theory of civilization’s genesis than the geographically based model proposed by Jared Diamond in Guns, Germs & Steel. For Diamond, geography was the key to agriculture, and agriculture was the key to civilization. For Wade, an initial round of genetic revisions resulted in sedentism, which triggered more genetic changes that led to agriculture, trade, and finally complex societies.

Before a hunting and gathering species can settle into large communities, its members must first learn to cooperate with strangers. Both freedom and egalitarianism must be sacrificed to social order and hierarchy. Such was the ancestral people’s revolutionary onus during the Upper Paleolithic age, from about 45,000 to 15,000 years ago. As the Last Glacial Maximum receded, approximately 15,000 years ago, humans began settling in the Near East. “Almost all subsequent human history and development,” Wade surmises, “seems in one sense a consequence of the pivotal transition from a foraging lifestyle to a settled, structured society.” This profound transition marked the beginning of the Neolithic Age.

So, if “behaviorally modern” humans evolved at least 50,000 years ago, why did they not become sedentary and develop agriculture much sooner than they did? The answer is implied in the author’s conclusion that human evolution is both stepwise and continuing. In other words, “behaviorally modern” is a relative expression. While some have theorized that agriculture resulted from population pressures or from momentous climate changes, Wade points out that human populations burgeoned only after the advent of agriculture and that temperatures improved in several regions while agriculture emerged in few. Instead, he professes, both sedentism and agriculture resulted from “a suite of genetic changes” that rendered the ancestral population less aggressive and more amenable to abstract thought and economic interaction.

Thus, hunters and warriors ceded their reproductive advantage to farmers, administrators, and clerics. Although he admits that scientists have yet to identify the genes responsible for specific human behaviors, Wade emphasizes “the ease with which the human genome responds to cultural changes in society,” citing lactose tolerance as an especially prominent and relatable example. In humans, lactase, the enzyme that digests milk lactose, is usually switched on before birth and off after weaning. In a pre-agricultural world, human adult bodies would no longer produce lactase for lack of advantage. But in contemporary populations descended from northern Europeans and certain milk-drinking African and Bedouin tribes, the lactase gene remains turned on into adulthood or even throughout life. Lactose tolerant Europeans have inherited a very large block of DNA including the lactase gene, and large blocks of DNA shared by many people tend to indicate recent selection. Most importantly, however, lactose tolerance demonstrates quite clearly that human physiology adapts to cultural changes that affect the environment. Thus, in theory, humans are to some extent capable of directing their own evolutionary destinies.

One must not, of course, confuse evolution generally with the romantic concept of progress. Even so, a person might be excused for reflecting upon humanity’s recent development with nominal pride. And perhaps Wade is correct to point out that human evolution specifically might one day prove to be different. Humans, after all, make choices, both personal and collective. In The Descent of Man, Darwin himself observed that man’s advancement, though in no way due to his own exertions, might still give him “hope for a still higher destiny” in the future.