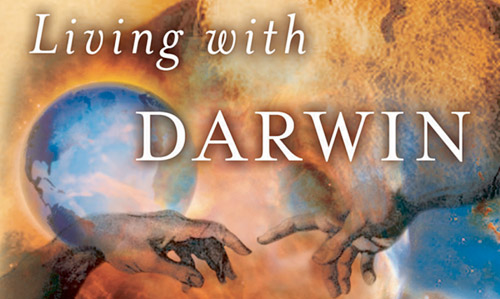 Living with Darwin (detail of cover)

Modern biology tells a story of human beings emerging as the highly contingent result of four billion years of evolution by natural selection. Christianity teaches that the Earth was created by an omnipotent and omnibenevolent God specifically for humans. Francisco Ayala argues that it is reasonable to see in this dichotomy two sides of the same coin. Phillip Kitcher demurs.

A glut of recent books has addressed the perennial question of the proper relationship between evolution and Christianity. Whether written by scientists such as Ken Miller, Francis Collins and Joan Roughgarden, or theologians such as Alister McGrath or John Haught, the conclusion is invariably the same. No conflict is found. Several gambits are offered to attain this reconciliation: perhaps evolution is God’s means of creation, the creation story in Genesis is intended allegorically, or science and religion address different questions. Representative of this genre is Ayala’s short book. He opens as follows:

The message that this little book seeks to convey is that science and religious beliefs need not be in contradiction. This message has a long Christian tradition that extends since the time of Augustine in the fourth century, and even earlier, to Pope John Paul II and other religious authorities of the present. There are many believers in the United States and elsewhere who think that science, particularly the theory of evolution, is contrary to the teachings of the Bible and to religious beliefs, such as Creation by God. Science has demonstrated again and again, beyond reasonable doubt, that living organisms evolve and diversify over time, and that their features have come about by natural selection, a process that accounts for their “design.” I will seek to convince you, dear reader, that we may accept the scientific knowledge without denying the existence of God or God’s presence in the universe and all natural phenomena.

After such an opening, you might be surprised to learn that fully 89 of the book’s 104 pages say almost nothing about the reconciliation of science with faith. Instead we are treated to a brief historical introduction to Darwin and his work, a lucid explanation of the most basic elements of evolutionary theory and the evidence supporting it, and a brief discussion of the scientific and theological difficulties of intelligent design and creationism. This portion of the book is certainly competent and worthwhile, but it contains very little that is new.

It is the book’s final chapter that addresses the faith question. Ayala opens with this bit of bravado: 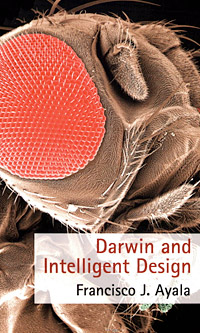 I want to make in this final chapter two main points, which to me seem obvious or at least beyond reasonable doubt. One point is that the theory of evolution is not incompatible with belief in the existence of God and God’s presence in the workings of the universe. The second point is that science is a powerful and successful way of acquiring knowledge about the universe, but it is not the only way: other valid ways of acquiring knowledge about the universe include imaginative literature and other forms of art, common sense, philosophy and religion.

Obvious? Beyond reasonable doubt? How does the author back up his claim?

Ayala first addresses the conflict between evolution and Genesis. He argues that numerous religious scholars reject the idea of a literal interpretation of Genesis.

Many Bible scholars and theologians have long rejected a literal interpretation as untenable, however, because the Bible contains incompatible statements. The very beginning of Genesis presents two different creation narratives. Extending through chapter 1 and the first verses of chapter 2 is the familiar six-day narrative, in which God creates human beings — both male and female — in his own image on the sixth day, after creating light, earth, firmament, fish, fowl, and cattle. But in verse 4 of chapter 2 a different narrative starts, in which God creates a male human, then plants a garden and creates animals, and only then proceeds to take a rib from the man to make a woman.

Ayala endorses the position of Pope John Paul II that the Genesis story is intended not as a scientific treatise on the origin of the universe, but rather as a declaration of God’s sovereignty over his creation.

We can certainly agree with Ayala that these are common sentiments among Christians. But you cannot reconcile evolution with Christianity simply by declaring that many people see no conflict. The issue is whether they have a sound basis for their opinions.

The problem, as many creationists are keen to note, is that Genesis does not read like an allegory; it reads like history. It is an unambiguous accounting of a specific sequence of actions taken by God. A sequence, incidentally, that conflicts with the scientific account at nearly every turn. Why would a story teaching something as simple as God’s sovereignty be told via a fictitious sequence of events? That aside, this is hardly the main front in the battle between science and faith. How does Ayala presume to explain why an all-loving, all-powerful God creates via such cruelty as found in nature?

He does not even try. After his catalog of banalities about dismissing Genesis as an allegory, Ayala provides a brief history of the legal conflicts over the teaching of evolution in public schools, and closes with some familiar sentiments about science being only methodologically, and not metaphysically, materialistic. These are worthy sentiments to be sure, but they have little relevance to the main issue. Reconciling evolution and Christianity is more difficult than Ayala seems willing to admit.

One person who is not so reticent in that regard is Columbia University philosopher Phillip Kitcher, who writes in his book on the same topic:

They recognize that the Darwinian picture of life is at odds with a particular kind of religion, providentialist religion, as I shall call it. A large number of Christians, not merely those who maintain that virtually all of the Bible must be read literally, are providentialists. For they believe that the universe has been created by a Being who has a great design, a Being who cares for his creatures, who observes the fall of every sparrow and who is especially concerned with humanity. Yet the story of a wise and loving Creator who has planned life on earth, letting it unfold over four billion years by the processes envisaged in evolutionary theory, is hard to sustain when you think about the details.

And later in the book:

The general inefficiency of the processes, the extreme length of time, the haphazard sequence of environments, the undirected variations, the cruel competition through which selection so frequently works, is all foreseen. And the individual nastinesses to which Darwin points are expected outcomes of deploying these sorts of processes. If we search the creation for clues to the character of the Creator, a judgment of whimsy is a relatively kind one. For we easily might take life as it has been generated on our planet as the handiwork of a bungling, or a chillingly indifferent, god. 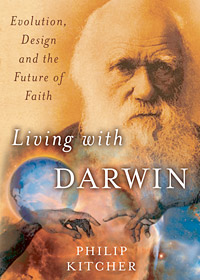 Kitcher goes on to consider, and find wanting, various attempts to salvage providentialist religion from the jaws of the enlightenment. He suggests the possibility of “spiritual religion,” in which belief in the supernatural is discarded in favor of recognizing the moral vision to be gained from holy texts. Alas, he is quite right to suggest that it is unclear how such a religion differs in any substantial way from plain, vanilla secular humanism.

This is a far harder line than the one taken by Kitcher in his earlier anti-creationist book Abusing Science, in which he hewed closely to the Ayala line that Genesis is an allegory and that there is no cause for Christians to feel threatened by evolution. In the present book Kitcher bluntly admits the relative hardening of his views.

Like Ayala, Kitcher postpones to the final chapter his discussions of evolution and Christian faith. Also like Ayala, Kitcher discusses the nature of and the case for evolution, and discusses some of the major arguments offered by creationists and ID proponents. Kitcher provides considerably more detail than Ayala, but, once again, readers with experience in this subject are unlikely to find anything new.

I can recommend both of these books to people looking for a fast overview of the basic issues. Though Ayala has not adequately considered the full force of the scientific case against religious faith, the remainder of his short book is admirably clear and readable. Kitcher deserves credit not only for his forthright consideration of the difficulties posed to traditional religion by modern science, but also for his blunt, and in my view correct, conclusion that the difficulties are insurmountable without fundamentally altering the nature of Christian faith.

Disputes over the scientific legitimacy and religious implications of evolution frequently take place in the context of school board disputes. There is much grassroots sympathy for teaching some form of creationism in public schools as a legitimate scientific alternative to evolution. Crucial to resisting such efforts is the enlistment of religious people who have made their peace with what evolution is telling us. In that light, many on the pro-science side are critical of people like Richard Dawkins, Daniel Dennett, and now Phillip Kitcher, who state bluntly that evolution and religion are not so easily reconciled.

This presents a problem. In terms of political tactics, the critics have a point. Most Americans believe in God, and alienating them by stressing the conflict between evolution and religion hardly seems like a wise method of protecting decent science education. The only thing the anti-reconcilers have going for them is that all the really good arguments are on their side. I regret that I lack a clever resolution to this impasse. In the end, however, the truth ought to count for something. Perhaps the time has come to stop worrying about political tactics and to worry instead about making the best arguments we can. After all, evolution is already marginalized in many school districts and large majorities support introducing creationism in some form. Are we really worried that some sharp rhetoric from the academic community is going to make things worse? 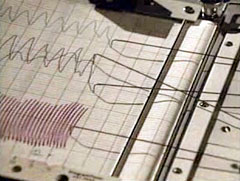 Can the polygraph machine really scientifically measure if someone is lying, or are all those graphs and numbers just pseudoscience in the service of law enforcement? Can we tell if someone is lying to us by their body language or facial expressions? Michael Shermer puts both the polygraph and lie detection to the test in this dramatic episode that features O.J.’s jury consultant lie detection expert.

The author of the highly acclaimed and controversial book, Taboo: Why Black Athletes Dominate Sports and Why We’re Afraid to Talk About It, investigative journalist Jon Entine, in his new book Abraham’s Children, attempts to answer new taboo topics, such as: Did Moses really live? What was the real fate of the Lost Tribes? …