the next lecture in our fall season…

In this debate on what are arguably two of the most important questions in the culture wars today — Is Religion a Force for Good or Evil? and Can you be Good without God? — the conservative Christian author and cultural scholar Dinesh D’Souza and the libertarian skeptic writer and social scientist Michael Shermer, square off to resolve these and related issues, such as the relationship between science and religion and the nature and existence of God. This event promises to be one of the liveliest ever hosted by the Skeptics Society at Caltech, mixing science, religion, politics, and culture.…

with Master of Ceremonies, Hal Bidlack

Escape the cold and snow, and join us this January in sunny Florida for a very special Amaz!ng Meeting. The Amaz!ng Meeting 5.5 is a unique opportunity to experience a more intimate gathering with new speakers, a new format, and more audience interaction.

Events include a fundraising dinner with James Randi and his special guests, an open house at the James Randi Educational Foundation headquarters, and an optional four-hour workshop on podcasting, blogging and building your own website. For more information and full details:

With all the buzz this week about UFOs and the call for an investigation into what the government is hiding from us about extraterrestrial aliens, we thought we would ask a NASA official in charge of dealing with the public about such matters, and that is NASA scientist David Morrison. Read on for how Dr. Morrison handles such queries as “where are you hiding the alien bodies?” and other such matters.

Dr. David Morrison is Senior Scientist of the NASA Astrobiology Institute. He is a recent recipient of the American Astronomical Society’s Carl Sagan Medal honoring his efforts to explain science to the public. 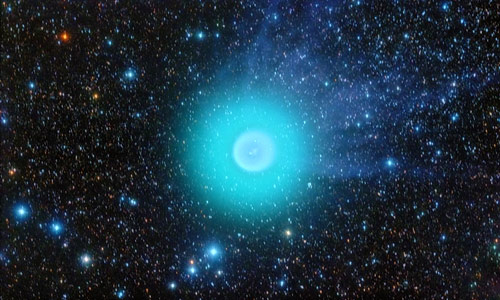 Amateur astronomers all saw the remarkable explosion in brightness of Comet Holmes, and yet none have ever managed to see a UFO. Likewise, hundreds of thousands of video cameras and security surveillance cameras have failed to find a UFO. (photograph copyright Vicent Peris and José Luis Lamadrid (astrofoto.es)

As Senior Scientist of the NASA Astrobiology Institute I receive many questions submitted to NASA’s website Ask an Astrobiologist. A great many of these concern UFOs, especially the notion that there is a government cover-up. Interestingly, an increasing fraction of these are coming from India. Readers of Skeptic might be interested in how I answer these questions.

A google search on “UFO” quickly reveals how pervasive such ideas are, with only a couple of skeptical entries listed in the first several pages. It is therefore not surprising that almost all my questioners seem to accept the reality of alien visitation. One recent writer asked: “If NASA is not hiding anything, and there has been not one evidence of UFO or Alien, how can some evidence on TV or internet be explained? If they are all fake, why not NASA explain this, and why are they not stopped from telling lies? How do you explain all those people who have proof, including many scientists, doctors for example who found real alien object in someone who was kidnapped by alien. NASA or some officials should make documentary that explains all about these on TV. If not, anyone would think that they are hiding something from us.”

Here is my reply: First, these stories you have heard are not true, for instance about photos of UFOs from NASA spaceships, or doctors finding an alien object in someone. If any of these stories were true, or if there were any scientific evidence for aliens, you would see it all over reputable newspapers and TV news shows. There is a tremendous amount of misinformation out there, especially on the Internet. I know of no simple rule to separate the truth from the lies, except to learn which sources are trustworthy. Second, you raise the question why “they are not stopped telling lies” and why NASA is not making a documentary “that explains all about this on TV”. The government is not in the business of making documentaries or broadcasting on television. NASA officials and other scientists have explained many times the difference between truth and fiction in this area. But we cannot — and would not want to — control what news and opinions are in the media.

One of my first UFO questions stated that Apollo astronaut Buzz Aldrin had reported that he and his crew members saw a UFO on Apollo 11. “Edwin Aldrin recently came out in a special on the Science Channel and stated that the astronauts aboard Apollo 11 all saw unidentified objects which seemed to have been following them. He also mentions that they were briefed not to talk about what they had seen. What does NASA have to say in response to this? What were those objects they all saw?”

To get a straight story, I called Buzz Aldrin, who was happy to explain what had happened. He said that the quotations were taken out of context and did not convey the intended meaning. After the Apollo 11 crew verified that the object they were seeing was not the SIVB upper stage, which was about 6000 miles away at that time, they concluded that they were probably seeing one of the panels from the separation of the spacecraft from the upper stage. These panels were not tracked from Earth and were likely much closer to the Apollo spacecraft. They chose not to discuss this on the open communications channel since they were concerned that their comments might be misinterpreted (as they are being now). All of this explanation about the panels was cut from the broadcast interview, thus giving the impression that the Apollo 11 crew had seen a UFO. Buzz said that he was angry about the deceptive editing and asked them to correct this reversal of what he had said, but they refused.

With the popularity of Youtube, such claims are getting a new life. I recently received this: “Check out this video on YouTube with Buzz Aldrin saying he saw a UFO on Apollo 11. Whose fibbing, NASA or the great American hero, Buzz Aldrin?” My answer was that the fibbing was being done by the producers of the video, who cut the second half of the interview.

How can we argue effectively against beliefs that we are being visited constantly by alien spaceships? The simple assertion from authority — that none of these claims are to be found in mainstream publications or television — is probably not very convincing. Instead, I point out that the evidence for UFOs and alien visitation is weak. It is easy to see how weak the evidence is when we compare with other phenomena that are increasingly well documented. For example:

One can never prove a negative. But to me, these examples provide compelling evidence against the reality of UFOs, unless you are so enamored of the idea of alien visits that you think these aliens are carefully avoiding amateur astronomers, people with video cameras, and security video systems.