It’s the 2007 Skeptics Holiday Special. Giving gifts on December 25, Sir Isaac Newton’s birthday (he’s 365 this year!), has long been a tradition amongst skeptics, so here’s a few gems we plucked out of our catalogue that we think your friends and family members will enjoy receiving as gifts (and it’s okay to buy yourself a gift as well!). Check out these gems… 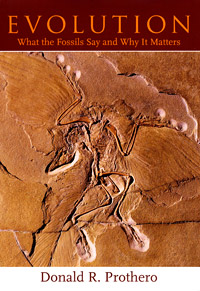 Evolution: What the Fossils Say
& Why it Matters
This is it, just published by Columbia University Press, geologist and paleontologist Donald Prothero’s magisterial masterpiece on what evolution is, how we know it happened, and why creationists and Intelligent Design theorists are wrong. This book is produced on the highest quality paper with professional quality photographs, making it a bargain at only $30. A beautiful gift. 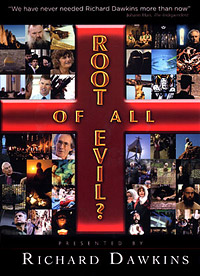 Root of All Evil? The Original Program
In this two-part documentary, Oxford Professor Richard Dawkins examines how religious faith is gaining ground in the face of rational, scientific truth. The program takes you to some of the world’s religious hot-spots, both in America and the Middle East, plus Dawkins meets with religious leaders and their followers, as well as scientists and skeptics to examine the power of religion. New edition on 2 discs: Disc 1: Episode 1: The God Delusion; Episode 2: The Virus of FaithDisc 2: Bonus Features: Commentary by Dawkins, a Dawkins reading of the preface to the paperback edition of The God Delusion, and Q&A with Dawkins. ORDER the DVD >
Root of All Evil? The Uncut Interviews
Eight uncut and never before seen interviews filmed for the Root of All Evil? Eight raw and uncut interviews from the original tapes, allowing the viewer a rare vantage point into these revealing exchanges. ORDER the DVD >
Growing Up in the Universe
Dawkins’ Royal Institution Christmas Lectures for Children on life, the universe, and our place in it. With brilliance and clarity, Dawkins unravels an educational gem that will mesmerize young and old alike. Illuminating demonstrations, wildlife, virtual reality, and special guests (including Douglas Adams) all combine to make this collection a timeless classic. ORDER the DVD >
The God Delusion, a Caltech reading and lecture
In a lecture based on his new book The God Delusion, Dawkins fires a direct no holds barred salvo against organized religion. He argues that belief in “The God Hypothesis” is both intellectually wrong, and a divisive and oppressive force that contributes to social backwardness and bigotry. Dawkins received an extended standing ovation. ORDER the lecture > 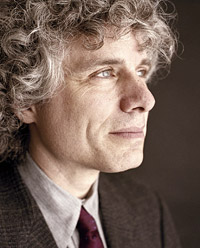 The Stuff of Thought
Pinker marries two of the subjects he knows best — language and human nature — into this lecture based on his new book on how words can help explain our nature (for example, what swearing reveals about our emotions or what innuendo discloses about relationships). Pinker reveals how our use of prepositions and tenses taps into peculiarly human concepts of space and time, and how our nouns and verbs speak to our notions of matter. Even the names we give our babies have important things to say about our relations to our children and society. ORDER the lecture >
The Blank Slate
Pinker brilliantly reexamines human nature and addresses the fears raised that a biological understanding of the mind will be used to justify inequality, subvert social change, dissolve personal responsibility, and strip life of meaning and purpose. ORDER the lecture >

The Lucifer Effect, by Dr. Philip Zimbardo
How is it possible for ordinary, average, even good people to become perpetrators of evil? Dr. Zimbardo ran the famous “Stanford Prison Experiment” in the late 1960s that revealed how susceptible anyone is to obey authorities. In this lecture Zimbardo applies his theories to understanding torture in the Inquisition, the massacre in Rwanda, the rape of Nanking, and the abuse & torture of in Iraq’s infamous Abu Ghraib prison. ORDER the lecture > 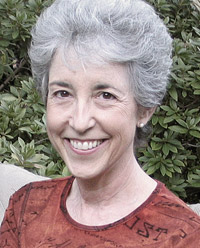 Mistakes Were Made (But Not by Me), by Carol Tavris
Renowned social psychologist Dr. Carol Tavris takes a compelling look into how the brain is wired for self-justification. When we make mistakes, we must calm the cognitive dissonance that jars our feelings of self-worth. And so we create fictions that absolve us of responsibility, restoring our belief that we are smart, moral, and right — a belief that often keeps us on a course that is dumb, immoral, and wrong. ORDER the lecture >

All books will be autographed, personally if requested (just make a note in the “comments” box when you checkout of the store).

Science Friction
Shermer becomes a psychic for a day, investigates quack cancer and alternative medicine, evolutionary psychology and the mutiny on the Bounty, chaos theory and history, intelligent design creationism, sports psychology, and more. Lively and fun reading. ORDER the book >
The Science of Good & Evil
Shermer’s theory on the evolutionary origins of morality and how to be good without God. Broad in scope, deep in analysis, and controversial. Shermer Examines the scientific evidence that shows that morality is deeply embedded in our being and behavior. Covers pre-moral animal behavior, neuroscience, game theory, free will, and more. ORDER the book > 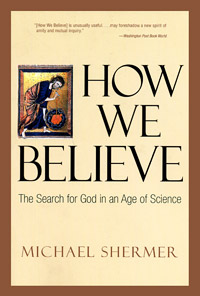 How We Believe
Shermer’s theory on why people believe in God and the evolutionary origins of religion. He offers fresh and often startling insights into age-old questions, including how and why humans put their faith in a higher power, even in the face of scientific skepticism. Whether believers or nonbelievers, we are all driven by the need to understand the universe and our place in it. ORDER the book >
The Borderlands of Science
Where does valid science leave off and borderland science begin? Examines the theories, the people and the history involved in areas of controversy where sense is in danger of turning into nonsense. ORDER the book >
In Darwin’s Shadow
A landmark biography of the co-discoverer of natural selection and the greatest naturalist of his age. Shermer applies modern psychological theories to understand why Wallace also crossed disciplines to become involved in spiritualism, seances, and life after death belief systems. ORDER the book >
Denying History
A splendid study of Holocaust denial. Shows how historical facts are proven. Deals with specific denier falsifications. Also covers other forms of historical denial, such as the rape of Nanking, and presents Shermer’s theory of history. ORDER the book >

For the Junior Skeptics in Your Family 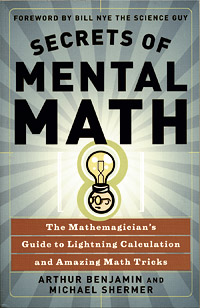 Secrets of Mental Math: The Mathemagician’s Guide to Lightning Calculation and Amazing Math Tricks, by Arthur Benjamin and Michael Shermer, foreword by Bill Nye the Science Guy.
Get ready to amaze your friends — and yourself — with incredible calculations you never thought you could master, as renowned “mathemagician” Arthur Benjamin shares his techniques for lightning-quick calculations and amazing number tricks. This book will teach you to do math in your head faster than you ever thought possible, dramatically improve your memory for numbers, and — maybe for the first time — make mathematics fun. ORDER the book >
Big Blast of Science, by Bill Nye the Science Guy
A great introduction to the basic laws of nature and scientific thinking using everyday examples and experiments that can be done with common household items. Sure to stimulate curiosity and change the way the reader looks at the world. ORDER the book >
The Magic Detectives, by Joe Nickell
30 mysteries encourages readers to think for themselves before the solution is offered. Historical ghost incidents, Mummy’s Curse, UFO creatures, Holy shroud, Lock Ness, and more. (ages 9–14 years). ORDER the book > 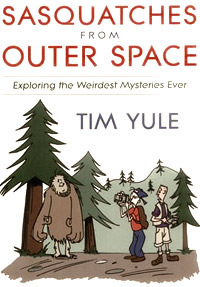 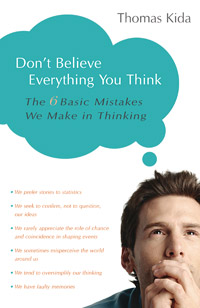 Don’t Believe Everything You Think: The 6 Basic Mistakes We Make in Thinking, by Thomas Kida
This enlightening book discusses how to recognize faulty thinking and develop the necessary skills to become a more effective problem solver. Identifies the “six-pack of problems” that leads us unconsciously to accept false ideas, and vividly illustrates these tendencies with numerous examples that demonstrate how easily we can be fooled into believing something that isn’t true. ORDER the book >

Secret Origins of the Bible (hardback), by Tim Callahan
Callahan uses ancient history, linguistics, archaeology, mythology, numismatics to reveal that all major stories in the Bible have historical antecedents that can be traced to very non-divinely produced works by other cultures. A must-read for anyone wishing to understand the Bible. ORDER the book > 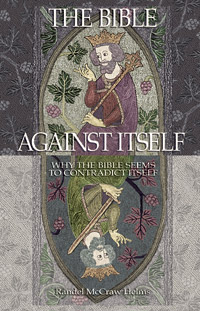 The Bible Against Itself (paperback), by Randel Helms
Before the Bible was the Bible it was a lot of little books written by many writers with many different viewpoints. If you open up the Bible and read it straight through, you will notice two things that should not be true if it had been written as a coherent whole and with a single purpose. First, the Bible is quite repetitious; second, the Bible frequently seems to contradict itself. Readers have often ignored these contradictions, and apologists have long tried to reconcile them. Randel Helms chooses a third course — to understand the contradictions by looking at the cultural and historical factors that produced them. ORDER the book >

Peter Sagal, author of The Book of Vice 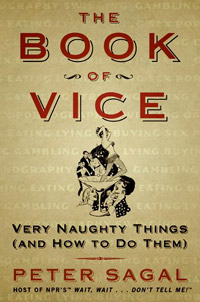 With the specter of the holidays looming and conspicuous consumerism running amok, Skepticality delves into the topic of vice with Peter Sagal, host of the popular quiz show Wait, Wait, Don’t Tell Me on NPR (National Public Radio). Peter is the author of The Book of Vice: Very Naughty Things and How to Do Them. 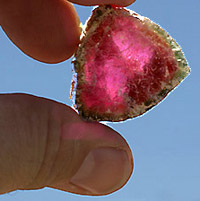 Oceanview Mine
in Pala, California

There are a few spots left to tour the Oceanview Mine in the Pala mining district of northern San Diego County — the last operating mine, producing beautiful gemstones, from a region that once had 73 mines. Screen as many buckets of fresh material from the mine as you like and keep any gems you find!

READ about this lecture >