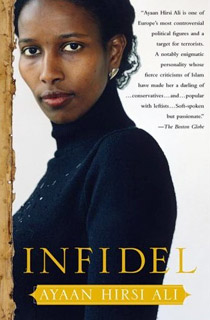 Most of you will recall the brutal murder of Theo van Gogh (a descendent of the brother of the famous artist) in Amsterdam in 2004 at the hands of a Muslim thug who was offended by Van Gogh’s film about violence against women in the Muslim world (yes, that’s right, for accusing Muslims of being violent he was violently killed — shot eight times and nearly decapitated). The killer left a note proclaiming that the author of the script upon which the film was based, Ayaan Hirsi Ali, would be next. Since then, and especially since her book Infidel became a bestseller, Ali has lived in fear and under Dutch government security. The Dutch government has now removed its protection, leaving Ali to fend for herself, scrambling to find the means to hire private professional security.

I thank my friend Sam Harris for calling my attention to a new fund recently established in her name to raise money to pay for her security. I believe that this is a great moral cause that skeptics, humanists, and believers in civil liberties and freedom of speech can and should rally behind. Normally we call for general assistance in combatting irrationality in its generic form so pervasive in our world; here is a golden opportunity to give to a very specific cause in which irrationality threatens the life of a courageous free thinker and champion of liberty. I’ve made my donation. I hope you will as well. — Michael Shermer, Executive Director 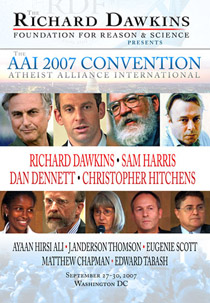 In 2007, the Richard Dawkins Foundation for Reason & Science (RDFRS) convened a two-hour meeting between Christopher Hitchens, Daniel Dennett, Sam Harris and Richard Dawkins (jocularly known as the “Four Horsemen”) in Christopher Hitchens’s apartment in Washington DC. Josh Timonen filmed their conversation using two high definition video cameras. Ayaan Hirsi Ali was originally invited to join them, but at the last minute she had to fly unexpectedly to the Netherlands. The remaining four discussants agreed with RDFRS’s proposal to donate to the Ayaan Hirsi Ali security fund all profits from sales of the DVDs from this remarkable conversation. The price will be $20, available at the end of December 2007. RDFRS also proposes to donate to the same fund the profits from a set of two DVDs, again filmed by Josh Timonen. This set features lectures by Ayaan Hirsi Ali, Daniel Dennett, Christopher Hitchens, Sam Harris, Richard Dawkins, J. Anderson Thomson, Matthew Chapman, Eugenie Scott and Edward Tabash, at the 2007 conference of the Atheist Alliance International, held in Washington DC in 2007. The price of this set of two DVDs is also $20. he price of this 2-DVD set is also $20, and is available now through the RichardDawkins.net online store. All DVDs are NTSC, Region Free. READ more about the DVDs > 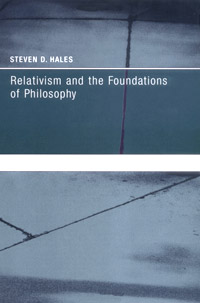 In this week’s feature article Steven D. Hales says “you can prove a negative” and that skeptics need not concede this point in debates. Steven Hales is Professor of Philosophy at Bloomsburg University, where he was the 2006 Outstanding Teacher of the Year. He received his Ph.D. from Brown University and specializes in metaphysics and epistemology. His recent books include Relativism and the Foundations of Philosophy (MIT Press, 2006) and Beer and Philosophy (Blackwell, 2007).

You Can Prove a Negative

A principle of folk logic is that you can’t prove a negative. Skeptics and scientists routinely concede the point in debates about the possible existence of everything from Big Foot and Loch Ness to aliens and even God. In a recent television interview on Comedy Central’s The Colbert Report, for example, Skeptic publisher Michael Shermer admitted as much when Stephen Colbert pressed him on the point when discussing Weapons of Mass Destruction, the comedian adding that once it is admitted that scientists cannot prove the nonexistence of a thing, then belief in anything is possible. Even Richard Dawkins writes in The God Delusion that “you cannot prove God’s non-existence is accepted and trivial, if only in the sense that we can never absolutely prove the non-existence of anything.”

There is one big problem with this. Among professional logicians, guess how many think that you can’t prove a negative? That’s right, zero. Yes, Virginia, you can prove a negative, and it’s easy, too. For one thing, a real, actual law of logic is a negative, namely the law of non-contradiction. This law states that that a proposition cannot be both true and not true. Nothing is both true and false. Furthermore, you can prove this law. It can be formally derived from the empty set using provably valid rules of inference. (I’ll spare you the boring details). One of the laws of logic is a provable negative. Wait … this means we’ve just proven that it is not the case that one of the laws of logic is that you can’t prove a negative. So we’ve proven yet another negative! In fact, “you can’t prove a negative” is a negative — so if you could prove it true, it wouldn’t be true! Uh-oh.

Not only that, but any claim can be expressed as a negative, thanks to the rule of double negation. This rule states that any proposition P is logically equivalent to not-not-P. So pick anything you think you can prove. Think you can prove your own existence? At least to your own satisfaction? Then, using the exact same reasoning, plus the little step of double negation, you can prove that you are not nonexistent. Congratulations, you’ve just proven a negative. The beautiful part is that you can do this trick with absolutely any proposition whatsoever. Prove P is true and you can prove that P is not false.

You can easily construct a valid deductive argument with all true premises that yields the conclusion that there are no unicorns. Here’s one, using the valid inference procedure of modus tollens (Latin for “mode that affirms by denying”):

Someone might object that that was a bit too fast — after all, I didn’t prove that the two premises were true. I just asserted that they were true. Well, that’s right. However, it would be a grievous mistake to insist that someone prove all the premises of any argument they might give. Here’s why. The only way to prove, say, that there is no evidence of unicorns in the fossil record, is by giving an argument to that conclusion. Of course one would then have to prove the premises of that argument by giving further arguments, and then prove the premises of those further arguments, ad infinitum. Which premises we should take on credit and which need payment up front is a matter of long and involved debate among epistemologists. But one thing is certain: if proving things requires that an infinite number of premises get proved first, we’re not going to prove much of anything at all, positive or negative.

Maybe people mean that no inductive argument will conclusively, indubitably prove a negative proposition beyond all shadow of a doubt. For example, suppose someone argues that we’ve scoured the world for Bigfoot, found no credible evidence of Bigfoot’s existence, and therefore there is no Bigfoot. This is a classic inductive argument. A Sasquatch defender can always rejoin that Bigfoot is reclusive, and might just be hiding in that next stand of trees. You can’t prove he’s not! (until the search of that tree stand comes up empty too). The problem here isn’t that inductive arguments won’t give us certainty about negative claims (like the nonexistence of Bigfoot), but that inductive arguments won’t give us certainty about anything at all, positive or negative. All observed swans are white, therefore all swans are white looked like a pretty good inductive argument until black swans were discovered in Australia.

The very nature of an inductive argument is to make a conclusion probable, but not certain, given the truth of the premises. That is just what an inductive argument is. We’d better not dismiss induction because we’re not getting certainty out of it, though. Why do you think that the sun will rise tomorrow? Not because of observation (you can’t observe the future!), but because that’s what it has always done in the past. Why do you think that if you turn on the kitchen tap that water will come out instead of chocolate? Why do you think you’ll find your house where you last left it? Again, because that’s the way things have always been in the past. In other words, we use inferences — induction — from past experiences in every aspect of our lives. As Bertrand Russell once pointed out, the chicken who expects to be fed when he sees the farmer approaching, since that is what had always happened in the past, is in for a big surprise when instead of receiving dinner, he becomes dinner. But if the chicken had rejected inductive reasoning altogether, then every appearance of the farmer would be a surprise.

So why is it that people insist that you can’t prove a negative? I think it is the result of two things: (1) Disappointment that induction is not bulletproof, airtight, and infallible, and (2) A desperate desire to keep believing whatever one believes, even if all the evidence is against it. That’s why people keep believing in alien abductions, even when flying saucers always turn out to be weather balloons, stealth jets, comets, or too much alcohol. You can’t prove a negative! You can’t prove that there are no alien abductions! Meaning: your argument against aliens is inductive, therefore not incontrovertible. Since I want to believe in aliens, I’m going to dismiss the argument no matter how overwhelming the evidence against aliens, and no matter how vanishingly small the chance of extraterrestrial abduction.

If we’re going to dismiss inductive arguments because they produce conclusions that are probable but not definite, then we are in deep manure. Despite its fallibility, induction is vital in every aspect of our lives, from the mundane to the most sophisticated science. Without induction we know basically nothing about the world apart from our own immediate perceptions. So we’d better keep induction, warts and all, and use it to form negative beliefs as well as positive ones.

Shermer on The Science of Good & Evil 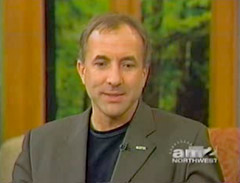 Michael Shermer’s tour for his book The Science of Good & Evil, found him here explaining why we are moral, the evolutionary origins of moral sentiments, and how to be good without God.

Skeptics around the world are sometimes surprised to learn that there may be an active skeptics organization in their own country or region. To get involved with skeptical activism in your area, you may wish to check the extensive list of international skeptical organizations and other resources maintained by the Committee for Skeptical Inquiry (formerly CSICOP)

Links to many international skeptics groups are also available here at Skeptic.com. If you know of any other national or major regional skeptics organizations that you feel should be added to our links page, please do let us know.

READ about this lecture >