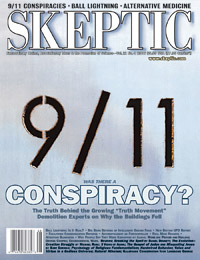 cover of back issue vol. 11 no. 4
ORDER the back issue

The latest mother-of-all-conspiracy-theories — that 9/11 was an inside job by the Bush administration — finds its members following Michael Shermer around on his book tour.

Ever since Skeptic magazine published an investigative article on the 9/11 “Truth Movement” and analyzed their claims, which were found wanting, I have been hounded by the so-called 9/11 “truthers” because I am the editor of the magazine and therefore am suppose to be a “skeptic” of the official explanation for 9/11.

In fact, throughout January, I have been on a book tour for The Mind of the Market, my book on behavioral economics and evolutionary economics, and at every event during the Q&A one of these “truthers” pretends to ask a question about economics but then quickly shifts to a rant about what “really happened” on September 11, 2001…

In this week’s eSkeptic we feature Michael Shermer’s contribution to the Annual Edge.org Question “What Have You Changed Your Mind About?”.

The 2008 Annual Edge Question:
What Have You Changed Your Mind About?

The Nature of Human Nature

When I was a graduate student in experimental psychology, I cut my teeth in a Skinnerian behavioral laboratory. As a behaviorist I believed that human nature was largely a blank slate on which we could impose positive and negative reinforcements (and punishments if necessary) to shape people and society into almost anything we want. As a young college professor I taught psychology from this perspective and even created a new course on the history and psychology of war, in which I argued that people are by nature peaceful and nonviolent, and that wars were thus a byproduct of corrupt governments and misguided societies.

The data from evolutionary psychology has now convinced me that we evolved a dual set of moral sentiments: within groups we tend to be pro-social and cooperative, but between groups we are tribal and xenophobic. Archaeological evidence indicates that Paleolithic humans were anything but noble savages, and that civilization has gradually but ineluctably reduced the amount of within-group aggression and between-group violence. And behavior genetics has erased the tabula rasa and replaced it with a highly constrained biological template upon which the environment can act.

I have thus changed my mind about this theory of human nature in its extreme form. Human nature is more evolutionarily determined, more cognitively irrational, and more morally complex than I thought.

READ over 150 other
Edge.org contributions

During his book tour Michael Shermer visited the offices of Reason magazine, who have recently added Reason.TV to their media package, a project helped launched by Drew Carey, who turns out to be a big fan of Skeptic magazine and all things skeptical. In this interview Reason magazine editor Nick Gillespie interviews Shermer on his new book, The Mind of the Market.

WATCH the video
on MichaelShermer.com

new this week on MichaelShermer.com
(in addition to those already mentioned in this week’s eSkeptic)