Physics of the Impossible now on DVD

One hundred years ago, scientists would have said that lasers, televisions, and the atomic bomb were beyond the realm of physical possibility. In this lecture, based his new book, Physics of the Impossible, the renowned physicist Michio Kaku explores to what extent technologies and devices deemed equally impossible today might become commonplace in the future. READ more…

In this week’s eSkeptic, Tony Ortega debunks the Phoenix Lights: the mysterious “vee” configuration that people reported seeing flying over the state of Arizona in March 1997.

Ortega became editor of the Village Voice in March, 2007. Prior to that he was a writer or editor at several alternative newsweeklies, including Phoenix New Times, Kansas City’s The Pitch, and New Times Broward — Palm Beach. He is originally from Los Angeles, has had a lifelong interest in astronomy and other sciences, and over his career has debunked not only the Phoenix Lights, but also a well-known Wyatt Earp historian who turned out to be fabricating his sources, as well as various “new religions.”

UFOs make great ratings, so it isn’t surprising that NBC’S Dateline aired a special on Sunday, May 18, entitled 10 Close Encounters Caught on Tape. To its credit, the NBC program at least made an attempt to provide prosaic explanations for each of the events it presented. In most cases, those explanations were actually pretty good, and the “UFO experts” for the most part came off as yahoos.

But when I realized that they were saving “the #1 UFO event caught on tape!” for last — the lame Phoenix Lights, the 1997 event that I helped debunk years ago as a reporter in Arizona, I prepared myself for yet another time that so-called journalists wouldn’t get even the most basic facts right. I wasn’t disappointed.

For starters, there were two separate events on the night of March 13, 1997 over the skies of Arizona. The mysterious “vee” configuration of lights that so many people across the state witnessed was seen over Prescott at about 8:15 p.m. and traveled south to Phoenix at about 8:30 and then passed over Tucson at 8:45. That’s 200 miles in thirty minutes which means the vee was moving at about 400 miles per hour. Some early eyewitnesses perceived that it was high in the sky, others swore it was low and moving very slowly. (And I mention “early” purposely. As the months passed, more and more elaborate — and ridiculous — claims were made by eyewitnesses who were clearly trying to one-up each other.) As I’ve pointed out many times, the eyeball is a poor instrument for judging the altitude of point sources of light in a night sky. Simple physics, however, suggests the vee was high in the sky and moving very fast, even if it looked like it was moving slowly due to the altitude. 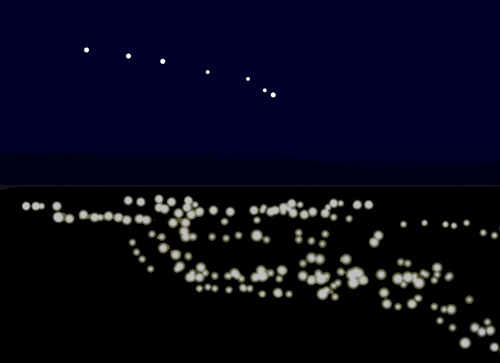 This kind of image is widely assumed to be the “vee” or first incident.
It actually shows the later flares. (This is a digital recreation.)

The images of the Phoenix Lights presented on the web further confuse the fact that two different incidents happened. The first incident, the original “vee,” passed overhead with almost no one photographing or filming it. Only one video seems to exist, and since it was shot of an overhead object it does not show a cityscape. This film was never promoted by UFO enthusiasts, perhaps because it doesn’t show the famous optical illusion of the “dark triangle.”

Most of the photos and video of the lights were taken of the second incident — the flares — as people came out in response to the first. These images show the flares in an arc over the Phoenix cityscape, which is sometimes confused with the earlier, overhead “vee.”

As I first revealed in the Phoenix New Times, a young man with a 10-inch Dobsonian telescope, Mitch Stanley, spotted the vee from his backyard, and saw that it was a formation of airplanes. Using a magnification of 60X — which essentially put him 60 times closer to the vee than people only using their naked eyes — Stanley could see that each light in the sky was actually a double, with one light under each squarish wing. The planes still looked small in his scope — suggesting they were flying at high altitude — and he didn’t know what type they were. But there was no doubt, he told me, that they were planes.

After his sighting, Stanley tried to contact a Phoenix city councilwoman who was making noise about the event, as well as a couple of UFO flim-flam men working the local scene, but he was rebuffed. I was the first reporter to talk to him, and, as a telescope builder myself, I made a thorough examination of his instrument and his knowledge of it. (For the inexperienced: a Dobsonian telescope is much easier to move than the typical department store scope; it’s child’s play for an experienced observer like Stanley to get a good look at passing planes at altitude.) And he had a witness: he had told his mother, who was standing nearby, that the lights were planes. After my story, the Arizona Republic also found his story credible and wrote about it.

On the night of March 13, news of the 8:30 pm sighting traveled fast, so a large number of people were outside with video cameras when the second and unrelated event, at about 10 pm, happened in the sky southwest of Phoenix. A string of lights appeared in the sky, and slowly sank until they disappeared behind the nearby Estrella Mountain range. This was later shown to be a string of flares dropped by the Maryland Air National Guard over the North Tac military range. Dr. Lynne Kitei, featured prominently on the Dateline program, can repeat all she wants to NBC and other media that these lights were magical and “intelligent” and later showed up just outside her living room window, but the videotapes taken that night by many people show without a doubt that this was a string of mundane lights that fell and disappeared behind the range, exactly as a string of flares dropped by the military planes would have.

The problem developed later when people conflated reports of the two sightings. For the many people who had seen the earlier vee pass directly over their heads, the explanation of the flares made no sense whatsoever. News organizations didn’t differentiate between the two events or report on the Stanley identification — even the Republic stopped referring to its earlier solid reporting on the Lights and began promoting it as “unexplained.”

To this day, programs like Dateline invariably question people who saw the earlier “vee” event, and quote them saying that flares couldn’t possibly explain what they saw. They are right. They didn’t see flares, they saw a formation of planes. Dateline repeatedly showed people talking about their memories of the 8:30 vee while showing video of the 10 pm flares. Talk about misleading.

There was at least one person who videotaped both the 8:30 vee and the later event. I saw his tape myself. It clearly showed the five lights of the 8:30 vee moving in relation to each other, exactly as you’d expect in a formation of airplanes.

As for the people who swore they saw a black triangular shape joining the five lights of the vee, that’s a classic contrast effect of the human eye. In a very telling case, a man who swore he saw a black shape joining the lights of the vee saw it pass directly in front of the moon. At that point, he saw not a black shape but wavy lines pass over the undimmed moon. But rather than conclude that he’d seen the contrails of planes, the man, whose perception had already been heavily influenced by the UFO explanation concluded instead that the pilot of the alien craft had turned his spaceship transparent right at that moment so the man could see the moon through it. How convenient! 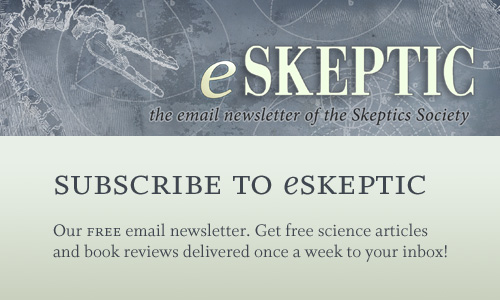 Part of what fueled so much confusion over the Phoenix Lights event was the input from a couple of UFO “investigators” on the scene — one of whom was literally put of business after my stories about him came out. For example, when it became obvious that the hundreds of people who saw the vee pass overhead had many different ideas about it — some said it was just over their heads, other said it was high in the sky, and no one could agree on the colors of the lights — instead of concluding that human beings naturally come up with different perceptions of the same event, these UFOlogists instead began to promote the idea that everyone had seen different vees! Again, going by the early reports, there was no doubt that a single vee crossed over the state that night in about a half-hour. But by the time the UFOlogists were through, the credulous came to believe that Phoenix was practically under attack by dozens of mile-wide triangular space-cruisers!

Also at fault was the local TV news fraternity, which not only couldn’t get the basic facts straight, but also cynically exploited the event for ratings. We’re still dealing with the misconceptions they promoted, such as…

Claim: The vee made no sound. (Not true. I talked to witnesses in Prescott, a quieter environment, who clearly heard jet noise.)

Claim: The vee didn’t show up on radar. (None of the UFO investigators bothered to ask for tapes from the FAA in Albuquerque, whose officials at the time told me they only kept tapes for 11 days. So we’ll never know what the radar picture looked like that night.)

Claim: The 10 pm lights fell in front of the mountain range, so they couldn’t be flares dropped in the distance by military planes (Videotapes taken by observers from higher elevations in the Valley saw the flares for a longer period of time than those who were in lower places, confirming that the flares dropped behind the Estrellas.)

Perhaps it’s a good thing that NBC has now declared this the numero uno UFO sighting of all time. Few sightings have been so thoroughly investigated by reporters, and so well debunked. But you won’t hear that from the networks, who can’t get enough of the ratings that come with “the unexplained.”

Beyond Human:
Living with Robots & Cyborgs

new this week on MichaelShermer.com
a Scientific American extravaganza!

This week on MichaelShermer.com we’ve made available the four most recent Scientific American columns written by Michael Shermer.