Seats are still available, but going fast. You can register online through Friday noon, but at this late date it is better to phone us at 626-794-3119. You can also register in person either Friday night at Burger Continental or Saturday morning at Caltech (full registration fees apply both days).

Getting to the Conference

Detailed information regarding accommodation and shuttle service from the airport to the Westin Hotel are available on the conference website.

GET accommodation and shuttle info >

For those of you who are renting a car at the airport we’ve provided direct links to Google Maps with directions from the Los Angeles International Airport (LAX) to Caltech as well as to the Westin Hotel. If you are starting your journey from a location other than the airport, you may enter that location in the “start address” field above the Google map.

GOOGLE directions from LAX to Caltech >

GOOGLE directions from LAX to the Westin Hotel >

Parking near the Beckman Auditorium

Was Vanity Fair Hoaxed
in its Marilyn Monroe Cover Story? 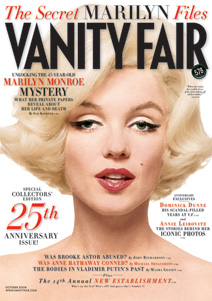 Two years ago we reported on the brilliant exposé by Mark Bellinghaus of a Marilyn Monroe hoax perpetrated at the Queen Mary in Long Beach, California, where included in a display of the movie star’s personal items were hair curlers. As Bellinghaus reported, famed psychic James Van Praagh used those curlers (and the blond hair in them) to make contact with Marilyn, and he even carried on a conversation with her on the national television show Entertainment Tonight. Well, Bellinghaus tracked down the origin of those curlers through their maker, Clairol. It turns out that those curlers were first manufactured in 1974, twelve years after Marilyn died, so it would be interesting to know just who Van Praagh was talking to! Perhaps there are Marilyn Monroe impersonators on the other side as well.

Psychics are not the only ones trying to cash in on Marilyn’s irresistible fame. Last April a news story broke about a newly surfaced Marilyn Monroe sex tape (what else?), which was also swiftly debunked by Mark Bellinghaus as yet another fake. 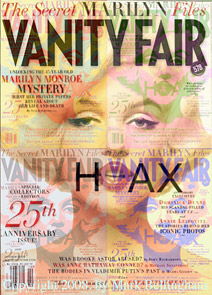 Marilyn is back in the news this month as Vanity Fair magazine featured her on their October cover in honor of their 25th anniversary issue, offering a potpourri of personal papers and items that promises readers will unlock the 45-year old “Marilyn Monroe mystery.” One such pictured item is Marilyn’s personal typewriter, on which she allegedly fingered letters to the rich and famous, which immediately set off Bellinghaus’s baloney detection alarm — Marilyn Monroe couldn’t type!

This is just one of numerous fakes and mistakes that Bellinghaus says are comparable to what Clifford Irving did when he faked Howard Hughes artifacts in order to sell his authorized biography of the billionaire to the McGraw Hill publishing company for one million dollars.

If you want to read the anatomy of a hoax, check out Mark Bellinghaus’ extensive article. He’s a first rate skeptical investigator of all things Marilyn. For my money, the real “Marilyn Monroe Mystery” is why people won’t let this tragic woman R.I.P.

It isn’t often one receives a letter so filled with hate and loathing, and yet written with such eloquence, that it is well worth reprinting (Dawkins has also posted it on his website). We are both including the letter writer’s address, in case anyone out there would like to write him a letter acknowledging his literary skills. My favorite part is the final sentiment, “Most Sincerely Yours”. That’s just priceless!

The Enemy Within:
2,000 Years of Witch-Hunting in the Western World

The term “witch-hunt” is used today to describe everything from political scandals to school board shake-ups. Long before the Salem witch trials, women and men were rounded up by neighbors, accused of committing horrific crimes using supernatural powers, scrutinized by priests and juries, and promptly executed. The belief in witchcraft — and the deep fear of evil it instilled in communities — led to a cycle of accusation, anger, and purging that has occurred repeatedly in the West for centuries…