A Skeptic in Congress?

Swoopy talks with Hal about the challenging and expensive process of seeking public office in the United States, and how the recent upset of financial markets is shaping this election season. Hal also explains how his study of the U.S. Constitution and experience as the nation’s premier Alexander Hamilton scholar lends valuable insight even in 2008. 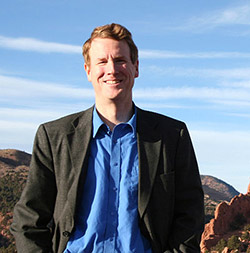 In this week’s eSkeptic, Skeptic magazine’s very own Skepdoc, Harriet Hall M.D., punctures the acupuncture myth and tells you why “almost everything you’ve heard about acupuncture is wrong.” 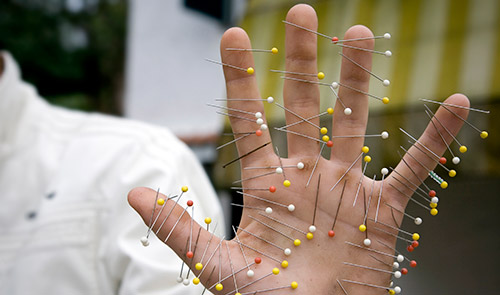 person with push-pins randomly piercing the skin of his hand

By definition, “alternative” medicine consists of treatments that have not been scientifically proven and that have not been accepted into mainstream medicine. The question I keep hearing is, “But what about acupuncture? It’s been proven to work, it’s supported by lots of good research, more and more doctors are using it, and insurance companies even pay for it.” It’s time the acupuncture myth was punctured — preferably with an acupuncture needle. Almost everything you’ve heard about acupuncture is wrong.

To start with, this ancient Chinese treatment is not so ancient and may not even be Chinese! From studying the earliest documents, Chinese scholar Paul Unschuld suspects the idea may have originated with the Greek Hippocrates of Cos and later spread to China. It’s definitely not 3000 years old. The earliest Chinese medical texts, from the 3rd century BCE, do not mention it. The earliest reference to “needling” is from 90 BCE, but it refers to bloodletting and lancing abscesses with large needles or lancets. There is nothing in those documents to suggest anything like today’s acupuncture. We have the archaeological evidence of needles from that era — they are large; the technology for manufacturing thin steel needles appropriate for acupuncture didn’t exist until about 400 years ago.

The earliest accounts of Chinese medicine reached the West in the 13th century: they didn’t mention acupuncture at all. The first Westerner to write about acupuncture, Wilhelm ten Rhijn, in 1680, didn’t describe acupuncture as we know it today: he didn’t mention specific points or “qi;” he spoke of large gold needles that were implanted deep into the skull or “womb” and left in place for 30 respirations.

Acupuncture was tried off and on in Europe after that. It was first tried in America in 1826 as a possible means of resuscitating drowning victims. They couldn’t get it to work and “gave up in disgust.” I imagine sticking needles in soggy dead bodies was pretty disgusting.

Through the early 20th century, no Western account of acupuncture referred to acupuncture points: needles were simply inserted near the point of pain. Qi was originally vapor arising from food, and meridians were channels or vessels. A Frenchman, Georges Soulie de Morant, was the first to use the term “meridian” and to equate qi with energy — in 1939. Auricular (ear) acupuncture was invented by a Frenchman in 1957.

The Chinese government tried to ban acupuncture several times, between 1822 and World War II during the time of the Chinese Nationalist government. Mao revived it in the “barefoot doctor” campaign in the 1960s as a cheap way of providing care to the masses; he did not use it himself because he did not believe it worked. It was Mao’s government that coined the term “traditional Chinese medicine” or TCM.

In 1972 James Reston accompanied Nixon to China and returned to tell about his appendectomy. It was widely believed that his appendix was removed under acupuncture anesthesia. In reality, acupuncture was used only as an adjunct for pain relief the day after surgery, and the relief was probably coincident with the expected return of normal bowel motility. A widely circulated picture of a patient allegedly undergoing open heart surgery with acupuncture anesthesia was shown to be bogus. If acupuncture is used in surgery today, it is used along with conventional anesthesia and/or pre-operative medication, and it is selected only for patients who believe in it and are likely to have a placebo response.

As acupuncture increased in popularity in the West, it declined in the East. In 1995, visiting American physicians were told only 15–20% of Chinese chose TCM, and it was usually used along with Western treatments after diagnosis by a Western-trained physician. Apparently some patients choose TCM because it is all they can afford: despite being a Communist country, China does not have universal health coverage.

Does acupuncture work? Which type of acupuncture? And what do you mean by “work”? There are various different Chinese systems, plus Japanese, Thai, Korean and Indian modalities, most of which have been invented over the last few decades: whole body or limited to the scalp, hand, ear, foot, or cheek and chin; deep or superficial; with electrified needles; with dermal pad electrodes and no skin penetration.

Acupuncture works in the same manner that placebos work. It has been shown to “work” to relieve pain, nausea, and other subjective symptoms, but it has never been shown to alter the natural history or course of any disease. Today it’s mostly used for pain, but early Chinese acupuncturists maintained that it was not for the treatment of manifest disease, that it was so subtle that it should only be employed at the very beginning of a disease process, and that it was only likely to work if the patient believed it would work. Now there’s a bit of ancient wisdom!

Studies have shown that acupuncture releases natural opioid pain relievers in the brain: endorphins. Veterinarians have pointed out that loading a horse into a trailer or throwing a stick for a dog also releases endorphins. Probably hitting yourself on the thumb with a hammer would release endorphins too, and it would take your mind off your headache.

Psychologists can list plenty of other things that could explain the apparent response to acupuncture. Diverting attention from original symptoms to the sensation of needling, expectation, suggestion, mutual consensus and compliance demand, causality error, classic conditioning, reciprocal conditioning, operant conditioning, operator conditioning, reinforcement, group consensus, economic and emotional investment, social and political disaffection, social rewards for believing, variable course of disease, regression to the mean — there are many ways human psychology can fool us into thinking ineffective treatments are effective. Then there’s the fact that all placebos are not equal — an elaborate system involving lying down, relaxing, and spending time with a caring authority can be expected to produce a much greater placebo effect than simply taking a sugar pill.

There are plenty of studies showing that acupuncture works for subjective symptoms like pain and nausea. But there are several things that throw serious doubt on their findings. The results are inconsistent, with some studies finding an effect and others not. The higher quality studies are less likely to find an effect. Most of the studies are done by believers in acupuncture. Many subjects would not volunteer for an acupuncture trial unless they had a bias towards believing it might work. The acupuncture studies coming from China and other oriental countries are all positive — but then nearly everything coming out of China is positive. It’s not culturally acceptable to publish negative results because researchers would lose face and their jobs.

The biggest problem with acupuncture studies is finding an adequate placebo control. You’re sticking needles in people. People notice that. Double blinding is impossible: you might be able to fool patients into thinking you’ve used a needle when you haven’t, but there’s no way to blind the person doing the needling. Two kinds of controls have been used: comparing acupuncture points to non-points, and using an ingenious needle in a sheath that appears to have penetrated the skin when it hasn’t.

In George Ulett’s research, he found that applying an electrical current to the skin of the wrist — a kind of TENS (transcutaneous electrical nerve stimulation) treatment — worked just as well as inserting needles, and one point on the wrist worked for symptoms anywhere in the body.

Considering the inconsistent research results, the implausibility of qi and meridians, and the many questions that remain, it’s reasonable to conclude that acupuncture is nothing more than a recipe for an elaborate placebo seasoned with a soupçon of counter-irritant. You can play human pincushion if you want, and you might get a good placebo response, but there’s no evidence you’ll get anything more.

Note: Part of this article was adapted from a PowerPoint presentation prepared by the late Dr. Robert Imrie. It’s well worth a visit; it includes great pictures of camelpuncture, goatpuncture, and chickenpuncture.